Close Reading of Hope is a thing with feathers

The language present in Emily Dickinson’s poetry is at times unclear, sometimes ungrammatical and can be found to be disjunctive. Dickinson wrote in distinct brevity, irregular grammar, peculiar punctuation and hand picked diction. Her poems were written in a circular manner, where she took the reader to one place and them swept them back to the beginning always relating one metaphor to the next. Dickinson was an intimate person throughout her life, and her poems reflect that lifestyle. Like her poems, she was never quite figured out.

Don't use plagiarized sources.
Get Your Custom Essay on Close Reading of Hope is a thing with feathers Just from $13,9/Page

Dickinson wrote not for the audience to understand but for her own self expression by writing down the words as they came to her, with little regard to the conventional syntax or diction. In this poem Dickinson coveys a metaphorical description of hope through simple language to explain a complex idea present in everyone’s life.

Dickinson’s poem “Hope” was written in both simple syntax and diction, but backed up with a strong meaning.

Though the word order and punctuation are somewhat strange, the actual words are easy to understand on their own. However, what makes them interesting is how they relate to one another and how they play an important factor to the overall theme of hope. Throughout the poem the words chosen are those we use everyday and made up of one or two syllables. The plain diction that is used throughout most of the poem shows the naturalness of hope.

Yet Dickinson breaks this flow with the word ‘extremity’ to show the burdens that hope can help one overcome. While hope is a difficult idea to grasp, Dickinson uses a simple writing style to explain hope in a philosophical view through the exploration of hope through all types of landscapes, such as the chillest land and strangest sea.

“Hope” takes the reader on a metaphorical journey through personifying hope into a bird. In the first line “Hope is the thing with feathers,” Dickinson’s choice of words helps describe how hope is anything with feathers, not necessarily something as concrete as a bird. By choosing to describe hope as “the thing” rather than a bird, she leaves room for interpretation while still painting a picture of the bird and its feathers. Hope is inanimate but by describing it as a thing with feathers she brings hope to life and creates an image of what hope may look like. By choosing hope to be a thing with feathers she sums up what hope really stands for, the ability to fly away, explore new places and start new adventures.

Hope is described as a thing, different to everyone, yet it’s a spirit that lives within everyone’s soul. Dickinson chooses her words carefully and meticulously to create the image of what hope would look like and act like if it were a living thing. She describes hope as “the thing”, not something or anything. It implies that hope is one of its kind, hard to duplicate, unique, yet attainable by everyone. The chosen words leave enough ambiguity for the reader to go back and forth between hope being something as concrete as a bird and the feeling that lifts the spirits of a broken soul. Hope is not a bird, but it is birdlike, free, full of life and ready to fly away at a moments notice. Hope is birdlike in a sense that it sings all day without expecting anything in return. Hope is simply there waiting for someone to cease it.

Without words, the tune is less definitive and not restrained to our own vocabulary. Dickinson, much like most humans, had trouble communicating their emotions orally. Because of his I believe that Dickinson chose to clearly express that hope sings without words. Humans are restricted by the connotations and definitions that words carry. However, birds aren’t restricted by words, they keep chirping their tune without a care. Dickinson conveys the sense of freedom that hopes delivers without any strings attached. Hope will remain in one’s life singing the tune, and it is up to each individual to make of hope what they wish. Hope has no words and because of this we do not know its’ intention, yet we know that it is always there for us because we hear its’ tune.

The following line “And never stops at all,” refers back to the endless tune that a bird chirps throughout the day. This line also creates a contrast with the preceding line that uses the word perch. While perch creates and feeling of unpredictability, the last line of this stanza contradicts itself when it states that hope never stops at all. These two contradictory terms were carefully chosen to once again paint the image of how hope may be personified as a bird. While a bird may chirp throughout the day without hesitation or the confusion that words might bring, a bird eventually stops or their song gets drowned out by the noise. While Dickinson wants to create a sense of eternal hope, she also wants to show that while hope will also be there, people tend to lose touch with it, much like a bird could at any point in time lose its perch. Though there is no sense of loss explained in the poem, the word perch creates this feeling as it stands for something that is not eternal.

Throughout the entire poem Dickinson makes a point to state that hope is all around us and always perched on our souls. During the rough times and the good times, hope will always be there waiting to pave the way. Dickinson ends her poem with a extremely powerful line, “Yet, never, in extremity,

It asked a crumb of me.” Hope is not just a a thing anymore, it is a selfless thing that continues to stand by your side and provide you with belief that things will work out. Yet it never asks for anything in return. Hope is unselfish, it will follow you through your darkest hours without an expectation of anything in return. It really helps illustrate what a crucial role hope played in Dickinson’s life.

Dickinson’s word choice is not the only carefully chosen aspect of the poem, the simple rhyme chosen helps the poem and message flow easily to the reader. By rhyming only the second and fourth lines of each stanza, Dickinson creates a tempo for the reader. Much like beautiful lyrics, her poems come to

Close Reading of Hope is a thing with feathers. (2016, May 07). Retrieved from https://studymoose.com/close-reading-of-hope-is-a-thing-with-feathers-essay 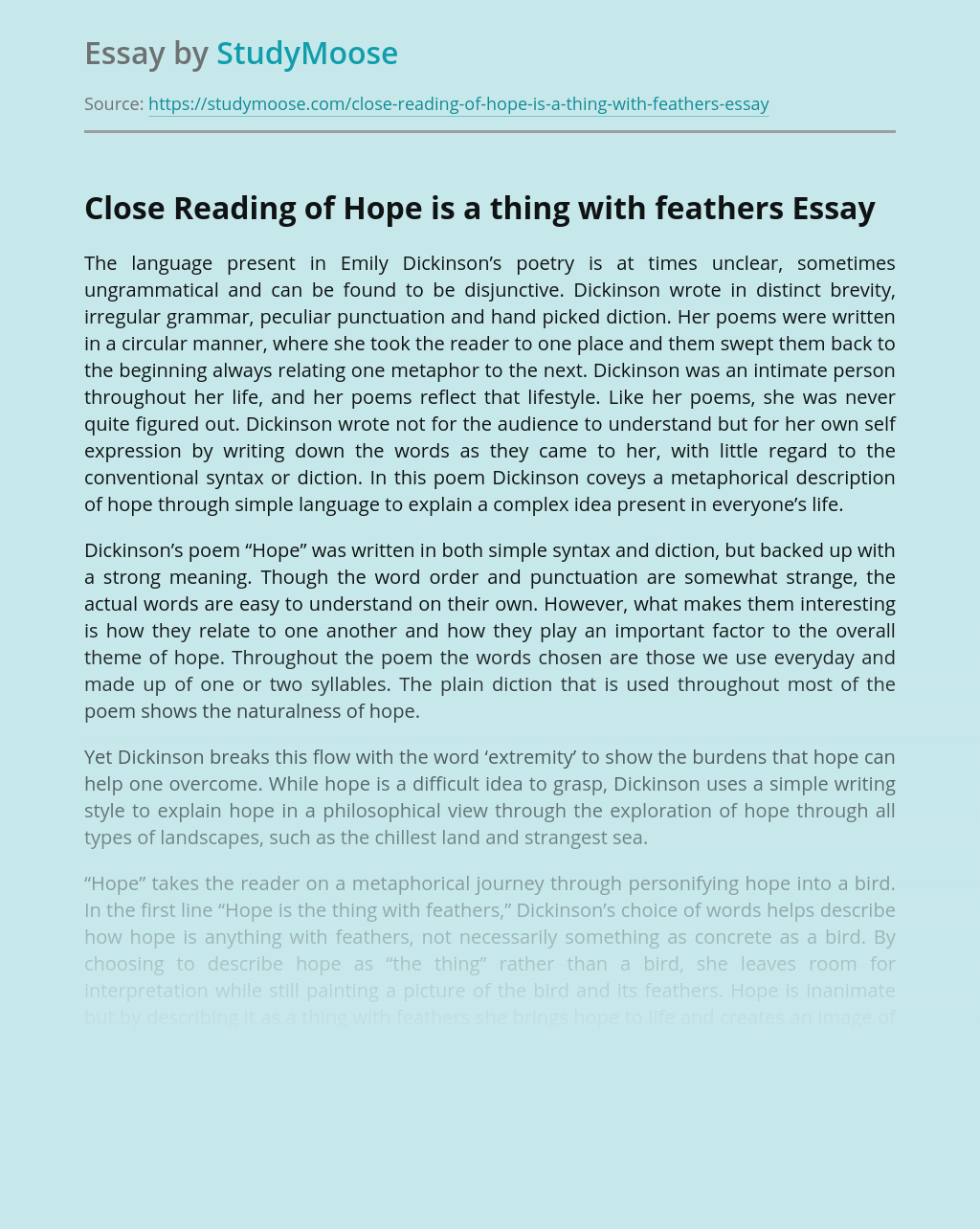 The use of the English language plays a crucial and dominant role in African literature. In contemporary African literature the use of English is often the key element for success as an African writer. This enables them to express their views across a larger area of today’s global world. However writing in English instead of...

Language Analysis the Power of Ink

Helen Day is a part-time journalist and blogger. She maintains her blog entitled Street beat on a variety of current social issues. This blog entry, The Power of Ink, is about tattoos and it has drawn a variety of responses from readers of her blog. In recent years, the practice of ‘inking’ your body, or...

The standards for written and oral English language conventions have been placed between those for writing and for listening and speaking because these conventions are essential to both sets of skills. 1. 0 Written and Oral English Language Conventions Students write and speak with a command of standard English conventions appropriate to this grade level....

English is an international language spoken all over the world that was originally borrowed from the world. If English is used as a global language, there might be some advantages related to communication and business. However, there are also several disadvantages in terms of losing mother tongue and taking time and money. The advantages outweigh...

Introduction The term “shift” commonly refers to changes which occur or may occur in the process of translating. As long as translating is a language use, the notion of shift belongs to the notion of linguistic performance as opposed to that of theories of competence. Although the term “shift” was initially adopted by Catford as...