George Washington Carver is now known as the “Peanut Man” among many other names. He was given this title because of his fascination with learning more about the peanut plant. He saw the potential in such a small thing, yet today we use many products that were either invented or inspired by George Washington Carver. He also impacted the black community in many ways. George grew up in Missouri during the Reconstruction era, which was a turbulent time for the whole country.

This forced him to be creative and industrious in his thinking. He and his parents were taken from the Carver plantation by slave raiders when he was only one week old. His parents were never heard from again, but he was retrieved by one of Mr. Carver’s men. He was raised by the Carvers, and the mistress of the house, Mrs. Carver, taught George to read and write. He discovered his passion for knowledge and immediately wanted to do whatever he could to learn as much as he could.

As soon as he was old enough he left “home” and went to a black kids’ school, 10 miles away. He soon had risen to the top of his class in high school and was accepted to a college in Kansas. But when the college found out that George was black they kicked him out. He didn’t give up though, he began to practice biology at home. Soon he found that it interested him and proved himself to the Iowa State University recruiters. In the 1890s Carver attended and graduated from Iowa State. He majored in biology and soon discovered another passion of his, helping others. He had already created a name and reputation for himself. He was known for being a highly intelligent, respectable, passionate man. He wasn’t known for what was on the outside, such as his skin color, but rather for what was on the inside, his brain, and his heart. He saw that the main agricultural industry in the south, cotton farming, was becoming less and less prolific as the croplands were growing sparse. Carver decided to do something important. To make a change.

First George decided he needed to find a replacement crop to make up for the dwindling cotton plants. He also knew it would need to be a soil-enriching plant, this would help bring nutrients back into the dried-out farmlands. In his searching, he found a plant that would impact humans more than he could ever know. Peanuts. Even today we don’t think of the peanut plant as being extremely important, sure it gave us some good sandwiches and a nice afternoon snack. But we don’t realize is that there’s more behind this discovery than simple meal-time indulgences. Behind this plant, we can find a story of hope, ingenuity, and perseverance, not to mention incredible leadership and a hope that would last generations. George Washington Carver saw something in this plant that others didn’t. He saw potential. And he was willing to put his time, money, and reputation at risk in order to find a cure for the broken southern economy.

After many failed experiments and numerous unsuccessful trials, he came up with hundreds of ingenious inventions. He created soaps, milk, plastics, dyes, cosmetics, ink, medicinal oils, synthetic rubber, vinegar, and even more products. This was possibly one of the greatest biological breakthroughs of this time. People were shocked, thrilled, and a bit suspicious of all of these new products and inventions. Though soon time would tell that George Washington Carver, a black, former slave, raised by his parents’ owners, destined to be nothing but another statistic, had invented products that, almost 130 years later, are being used by billions of people worldwide. His story is simply one of many that show that if we continue to persevere, work hard to achieve our goals, and never, never give up hope, we too can make a difference. George Washington Carver showed his ambition and drive in anything and everything he did. He was determined to make a name for himself and help his community out. He gave back to those who had given him so much. “Ninety-nine percent of the failures come from people who have the habit of making excuses.” – George Washington Carver. 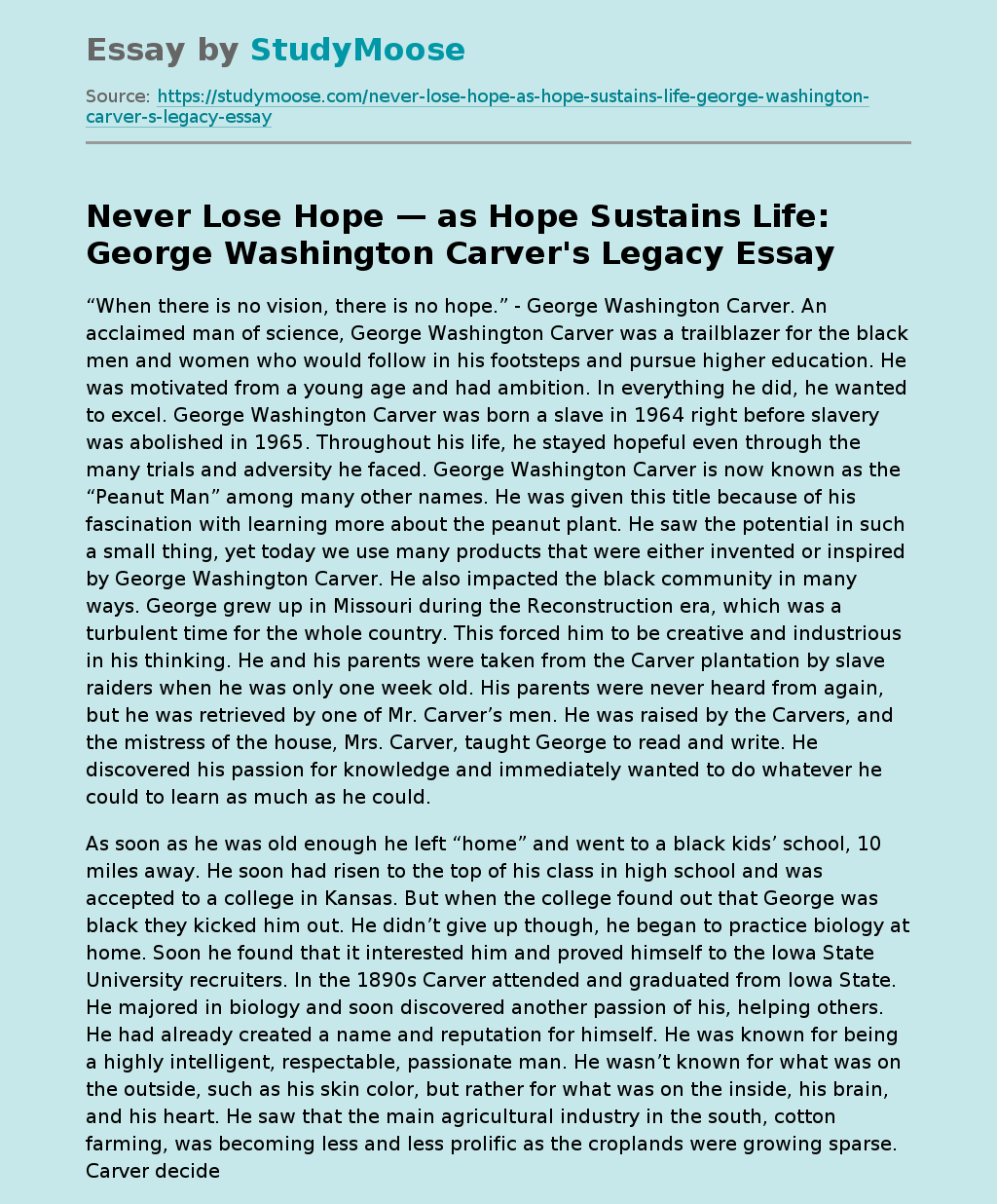