George W.C occupation as an agricultural scientist wasn’t easy as it was not a popular occupation and the people didn’t believe in them. Many people that his research targeted, such as farmers, didn’t think he was right since they believed the experience they have. It took time for people to start believing him when he taught farmers how to farm more efficiently and cheaper ways of feeding their animals. He also improved the crops rotation system which made soil richer for farming.

Don't use plagiarized sources. Get your custom essay on
“ Life of Scientist George Washington Carver ”
Get custom paper
NEW! smart matching with writer

During his Agricultural work to help farmers he invented the Jessup Wagon which was used as a portable teaching device to teach people without a good education about his discoveries. George was liked by the people because he shared his inventions and knowledge to improve their daily lives. A reason why people trusted and liked him is also because he began as low as them but became a teacher in a renowned school by working hard.

This made his rise to success faster since the people trusted him.

George was more than a scientist as his other professions included Botanist, Inventor, and Chemists which were all centered around plants. His study and discoveries on plants led to a surplus of peanuts, this caused him to study what peanuts could be used for. This work led him to creating many products that used peanuts such as glazed sweet potatoes, flour, vinegar, stains, dyes, paints, and writing ink. But he continued his studies which led him to create 300 types of products that got him recognized by the people and led to his fame.

The fame led him to discussing more controversial like discussing nutrition in developing nations with Mahatma Gandhi in India. Even when he had to deal with his projects and meetings he still updated the people of his new discoveries and updates, leading to still being recognized by the people.

George W.C has contributed to society by inventing many new products and introducing them to the economy which solved the problem of peanut and other non-cotton products. This helped the people because they earned more money from the other plants they planted and peanuts themselves. Another way that George W.C has majorly contributed is that he fought for the people of lower standing since they didn’t have an education as good as the higher class and blacks didn’t have an education as good as the whites. This helped the people because it was a step towards having equality in education between black and white schools and stopping segregation. This all shows George W.C’s contribution to the people and how he understands how it feels to be discriminated against.

George W.C died on January 5, 1943 at Tuskegee Institute from anemia at the age of 78. After Carver died he received his own monument in diamond Missouri and was admitted into the National Inventors Hall of Fame. Until the year of his death he still provided cultivation information and new findings he discovered like recipes and science while at the same time teaching his students about what he has learned throughout his lifetime. He has helped present scientists make new inventions and ideas branching off from his. In conclusion, George Washington Carver has done a great contribution to agricultural science and agriculture in general. 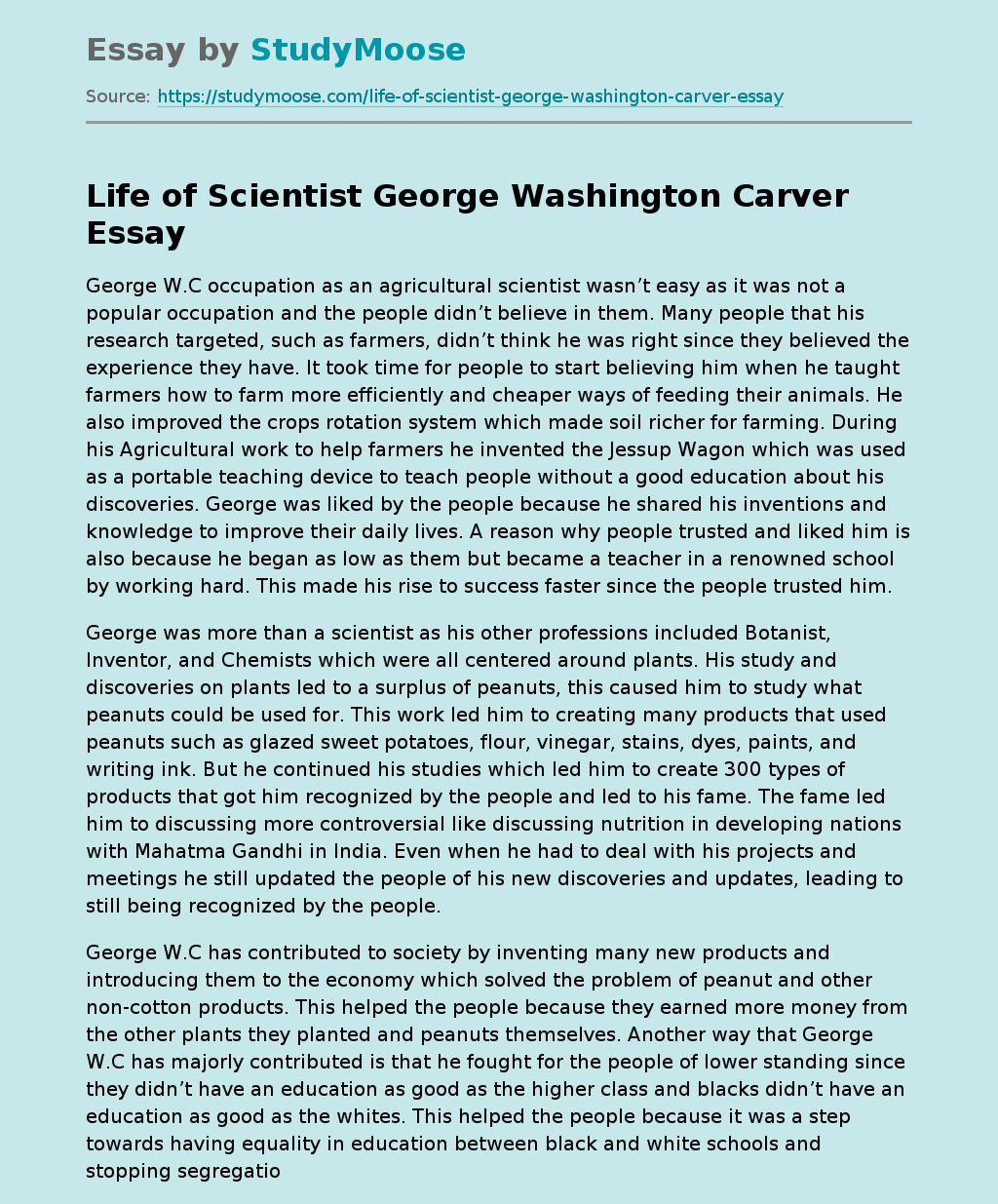