Tamil-speaking Brahmin family in Lahore, India. He was preceded into the world by two sisters and followed by three brothers and four sisters. His mother Sitalakshmi had only a few years of formal education, in keeping with tradition, and a measure of her intellectual strength can be appreciated from her successful translation of Ibsen and Tolstoy into Tamil.

His father C. S. Ayyar was a dynamic individual who rose to the top of the Indian Civil Service. It is not without interest that his paternal uncle Sir C.

Don't use plagiarized sources. Get your custom essay on
“ Scientist Subrahmanyan Chandrasekhar ”
Get custom paper
NEW! smart matching with writer

V. Raman was awarded a Nobel Prize in 1930 for the discovery of the Raman effect, providing direct demonstration of quantum effects in the scattering of light from molecules. Education began at home with Sitalakshmi giving instruction in Tamil and English, while C. S. Ayyar taught his children English and arithmetic before departing for work in the morning and upon returning in the evening. The reader is referred to the excellent biography Chandra, A Biography of S.

Chandrasekhar (University of Chicago Press, 1991) by Prof. Kameshwar C. Wali for an account of this remarkable family and the course of the third child through his distinguished career in science.

Chandra is the name by which S. Chandrasekhar is universally known throughout the scientific world. Chandra’s life was guided by a dedication to science that carried him out of his native culture to the alien culture of foreign shores. The crosscurrents that he navigated successfully, if not always happily, provide a fascinating tale. He was the foremost theoretical astrophysicist of his time, to paraphrase his own accounting of Sir Arthur Eddington.

The family moved to Madras in 1918 as C. S. Ayyar rose to deputy accountant general. Chandra and his brothers had private tutors then, with Chandra going to a regular chool in 1921.

His second year in school introduced algebra and geometry, which so attracted him that he worked his way through the textbooks the summer before the start of school. Chandra entered Presidency College in Madras in 1925, studying physics, mathematics, chemistry, Sanskrit, and English. He found a growing liking for physics and mathematics and an ongoing attraction for English literature. One can assume that his fascination with English literature contributed to his own lucid and impeccable writing style.

Chandra was inspired by the mathematical accomplishments f S. Ramanujan, who had gone to England and distinguished himself among the distinguished Cambridge mathematicians until his early death in 1920. Chandra aspired to take mathematics honors, whereas his father saw the Indian Civil Service as the outstanding opportunity for a bright young man. Mathematics seemed poor preparation for the Civil Service. Sitalakshmi supported Chandra with the philosophy that one does best what one really likes to do. Chandra compromised with physics honors, which placated his father in view of the outstanding success of Sir C. V. Raman. 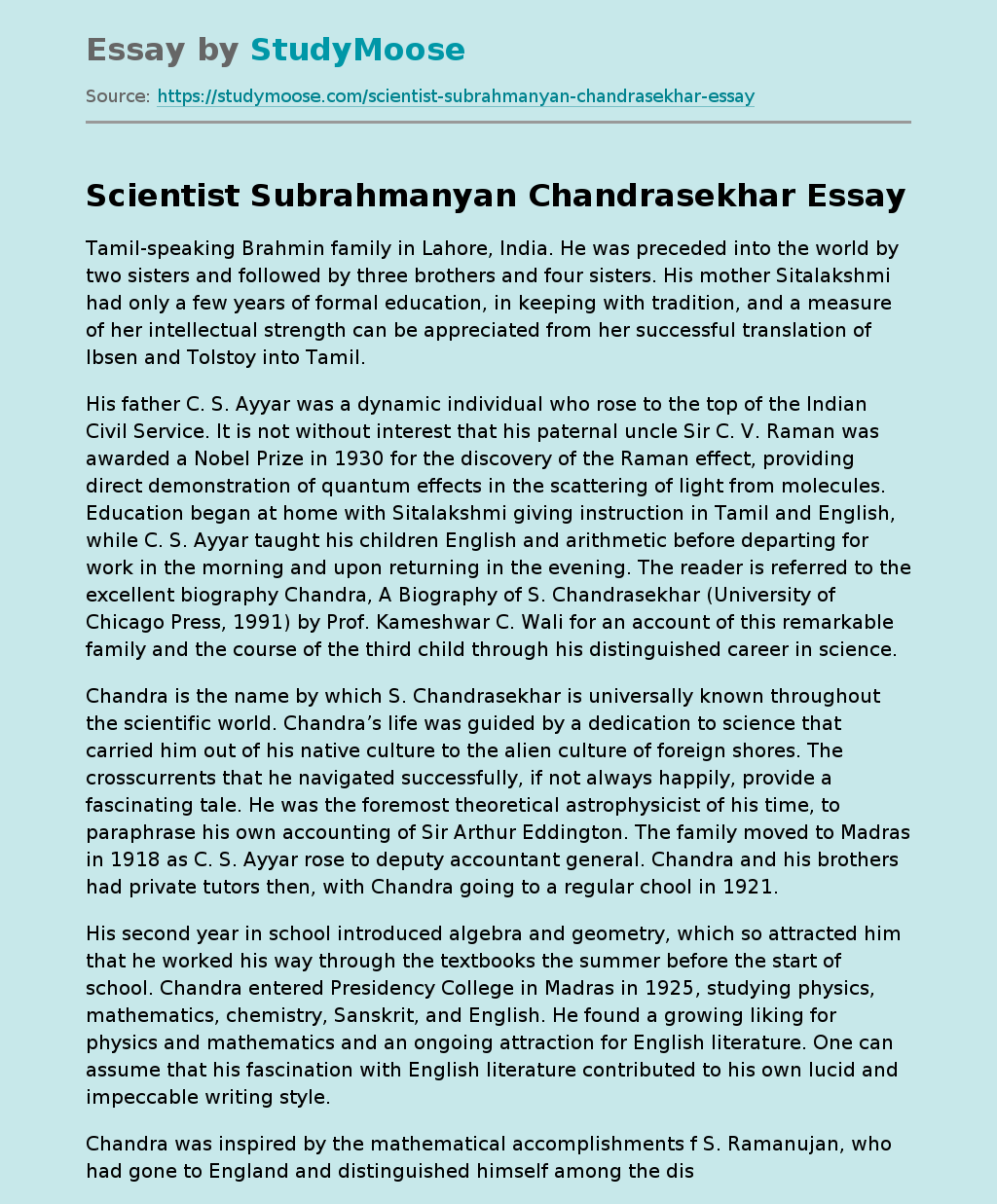