Jagdish Chandra Bose, a distinguished Indian scientist, announced his discovery to an astonished world in 1900. At an international conference of physicists in Paris, and later in England, Bose proved plants respond to pain and suffering much like humans, even when the plants are cut or transplanted. To prove his theory, Bose invented an instrument called the Resonate Recorder that was so sensitive it could record the subtlest of changes inside a plant. Using his theory and experiments as a basis, Bose moved to boldly challenge the blurred line between living things and non-living things.

He demonstrated that even so-called non-living things like metals respond to different stimuli. The only things lacking were sensitive instruments to empirically record those responses, and an open-mind to think the seemingly impossible. The genius within Bose quickly created these instruments which are even today considered a marvel of technology. But even hundred years after his research and experiments, our minds perhaps fail to comprehend the insights and significance of his work.

History proves here was a man more than a century ahead of his time.

Yet a few among his peers in the international community of scientists greatly admired his work. They acknowledged only an Indian mind could have come up with this kind of insight, and that this discovery could revolutionize scientific thinking itself. Born on 30th November, 1858, in Mymensingh, Bengal, Jagdish Chandra Bose was fascinated by the world and its phenomena around him from a very early age. His father, a deputy collector in British-ruled India, deliberately sent him to a Bengali school to instill a love for Indian values and life in young Jagdish.

He was later sent to a hostel in an English school in Calcutta. After his graduation from Sr. Xavier’s College in Calcutta, Bose left for England in 1880 for further studies. In 1884, Bose took his B. A degree in the natural sciences with Physics, Chemistry, and Botany, from Cambridge, and simultaneously a B. Sc degree from the University of London. On his return, Bose became the officiating Professor of Physics at the prestigious Presidency College in Calcutta in 1885. Unfortunately, British India discriminated against non-white teachers, and offered him only two-thirds the salary.

The unhappy Bose devised a noble way of protesting: he continued teaching with dedication for three years, but refused to collect his salary. Finally, his protest had its impact. A common payscale was introduced and he received his pending dues as well. Setting up a lab with his own money, Bose kept experimenting, especially in electromagnetic waves. In 1895, in front of a packed audience he sent radio waves that traveled through a wall to ring an electric bell 75 feet away.

In one stroke, he ushered in the world of wireless as we know it. Two years later, the Italian scientist Marconi based his wireless on the work of Bose, for which Marconi was later conferred with the Nobel Prize. Sure, Bose could have patented his work, won the Nobel prize instead, and made millions with his inventions. An educated man, Bose knew about patents and the commercial implications of his work. But beyond his knowledge, he carried a wisdom that few in today’s greed-driven and money-obsessed world can appreciate.

In May 1901, Bose wrote to his friend, the famed Indian poet Rabindranath Tagore: “… the proprietor of a reputed telegraph company… came himself with a Patent form in hand… He proposed to take half of the profit and finance the business in the bargain. This multi-millionaire came to me abegging. My friend, I wish you could see that terrible attachment for gain in this country, that all engaging lucre, that lust for money and more money. Once caught in that trap there would have been no way out for me.

In fact, exasperated by his attitude, Bose’s other friends obtained a patent for him from the US in 1904, but Bose never encashed it. His surprising anti-patent policy is best understood through his humility: Bose firmly believed and proclaimed that his work was not new, that the ancient sages and saints of India knew these undiscovered secrets of nature thousands of years ago and he was merely re-discovering them for himself. Sharing his knowledge so freely was his greatest wealth, his greatest reward.

He set up the Bose Temple of Learning in Calcutta in 1917 which trains international scientists even today. Bose received numerous accolades and recognition through his lifetime. He died on 23 November 1937. But even today he makes news. According to the June 1997 edition of the journal published by the U. S. -based Institute of Electronics and Electrical Engineers (IEEE), one of the most powerful radio telescopes in the world, installed at the National Astronomy Observatory in Tucson, Arizona, U. S. , was built on a device originally developed by Bose. 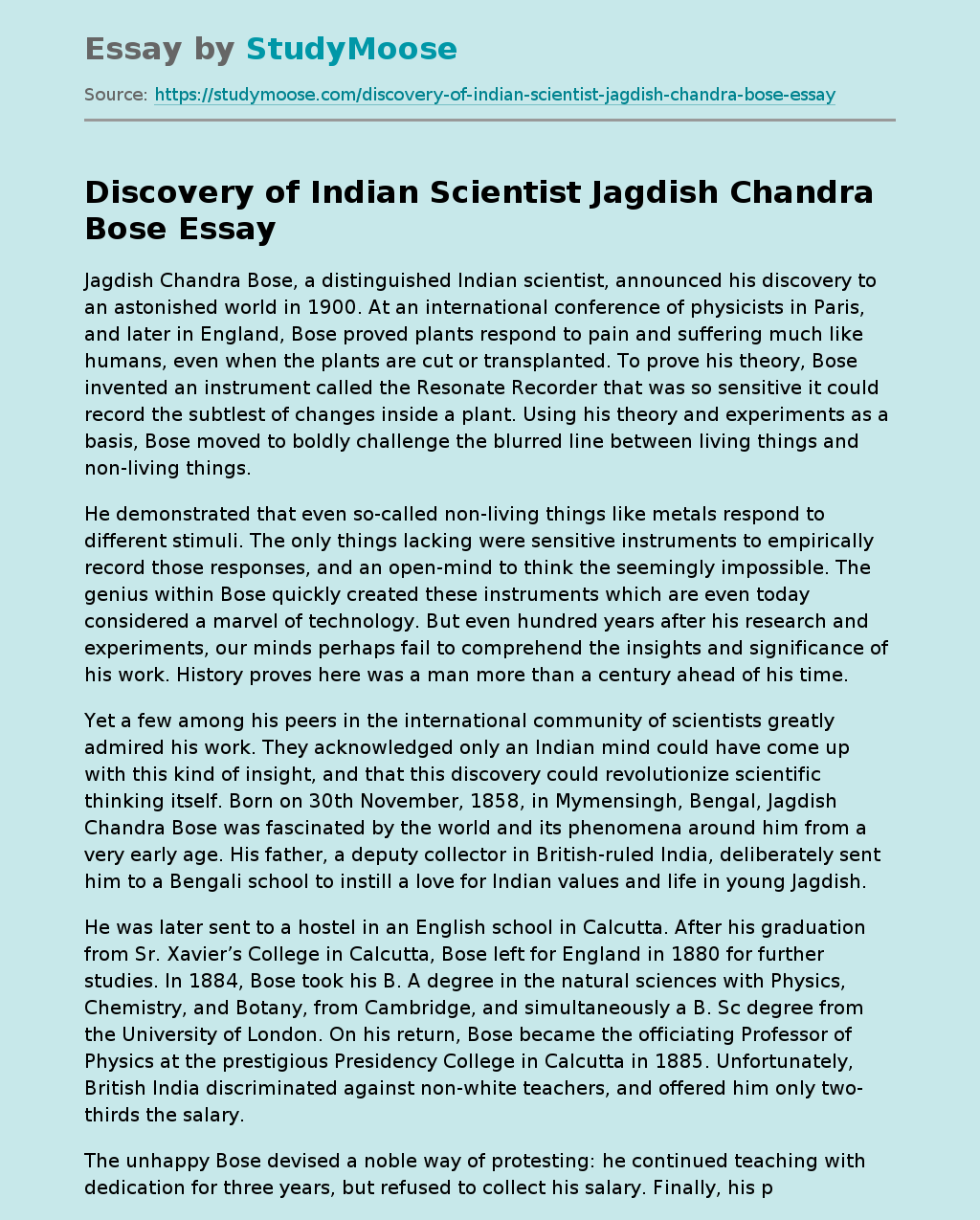