Born in a prominent Bengali family, Subhas had dedicated much of his younger years by being actively involved in freedom movements in India, for ridding India of the British Imperialist rule. For this purpose he joined hands with stalwarts such as Nehru and Gandhiji; he expressed his frustration, especially with Gandhijis’ slow and painstaking way of trying to win over the enemy with love (‘Ahimsa’). For this reason, he decided to leave the Congress Party.

The British became weary of him and placed him under arrest.

Don't use plagiarized sources.
Get Your Custom Essay on Netaji Subhas Chandra Bose: the Forgotten Hero Just from $13,9/Page

When he started a hunger strike unto death, they let him go but kept him under surveillance. Subhas eluded the police, under the guise of a Pathan with an alias, ‘Mohammad Ziauddin’. He crossed the Indian border in Afghanistan so that he could enter Russia and form an Indian independence Army to oust the British. His efforts failed, and he ended up as an ‘Italian diplomat’, “Orlando Mazzotta”, with an office in Germany.

He managed to convince the Nazis, despite Hitler’s views in Mein Kampf, that he preferred India to remain colonized under the British.

Nevertheless he was permitted to recruit Indian-born British Army POWs, and this is how the movement began. He secretly married his Austrian secretary, Emilie Schenkl, and earned the ire of the Germans, who wanted to keep their race pure “Aryan” or Caucasian. His efforts to take his army to India through Russia and Afghanistan were in vain as Adolf Hitler declared war on Russia (Operation Barbarossa).

After being disillusioned that Germany could be of any help in liberating India, in 1943 he left for Japan. He traveled by the German submarine U-180 around the Cape of Good Hope to southeast of Madagascar, where he was transferred to the I-29 for the rest of the journey to Imperial Japan. This was the only civilian transfer between two submarines of two different navies in World War II.

Arriving in Singapore,Bose took over control of the Indian National Army was able to reorganize the fledgling army and organize massive support among the expatriate Indian population in south-east Asia, who lent their support by both enlisting in the Indian National Army, as well as financially in response to Bose’s calls for sacrifice for the national cause.

INA started the war along with the Imperial Japanese Army along the North-Eastern frontier of India. INA captured Imphal and Kohima after pitched battles, running over the British forces there. INA marched unopposed into Assam and Bengal. This initiated a popular revolt in India with grass-root support. It increased its strength and defeated the British in the North East. But Japan surrendered after the bombings on Hiroshima and Nagasaki by USA. Netaji was declared dead in a plane crash over a radio news, though the Indians expressed their disbelief. 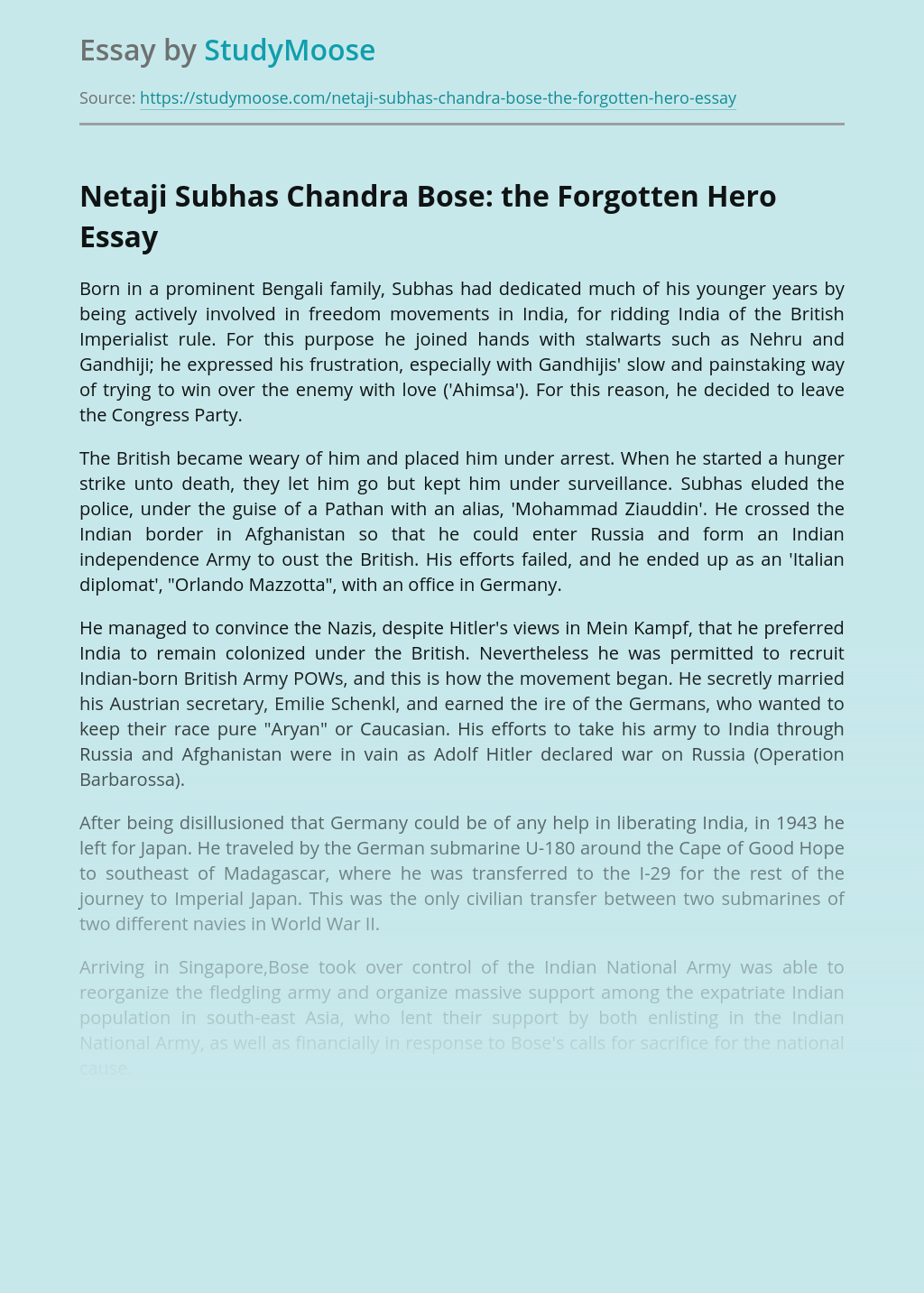 The principles of liberty and equality are what led America to be the great country it is today. Those terms would not be as meaningful if Thomas Jefferson, George Washington, Abraham Lincoln, and many other founders of our country did not embrace those ideas and adopt them from the Europeans. The strong belief in liberty...

Report for Fashion House in Bangladesh

It is a great plea-sure and humble opportunity for me that I am assigned for doing my internship in Artisti Collection Limited. During my Internship, I have been fortunate to get the support, assistance and encouragement from a number of individuals. Firstly, I would like to express my grateful appreciation to The Almighty Allah for...

Amongst the descendants of Hazrat Ibrahim A.S., Hazrat Ali A.S. belonged to the line of Quraish. He was the son of Abu Talib R.A., son of Abdul Muttalib of the distinguished tribe of Bani Hashim. Only one step above his lineage coincided with that of the Prophet S.A. of Islam. The latter being Muhammad bin...

TDA4.1 Summarise the laws and codes of practice affecting work in schools

There are a number of laws and codes of practice that affect work in schools. i.Data Protection Act 1998 – Regulates the process of information, i.e. use, obtain, hold and disclosure, relating to an individual. ii.Children Act 2004 – Places a statutory duty on key agencies e.g. schools to safeguard and promote the welfare of...

The emerging picture of knowledge management trends is presented very well in the following statements – “Virtually every enterprise and institution is grappling with the disruptions and opportunities caused by web-enabled infrastructures and practices. New best practices, business models, innovations, and strategies are emerging, including new ways to acquire, assimilate and share knowledge. Using technologies...