The case of the Forgotten Group Member is an excellent example of the complexities and interpersonal dynamics involved in working in a group environment. The text indicates that there are five stages to the team development process; adjourning, forming, storming, performing, and norming. (Schermerhorn 166)

To summarize briefly, the case study involved a group of students in an Organization Behavior class assigned to analyze a seven-page situation and provide a written analysis of their findings and conclusions. There were five members selected from the class for each group.

In this group, the case study focused on two primary characters, Christine, who was a dedicated and hard-working student who strived to master her subjects and advance her educational credentials. Because of her tenacity and determination, she was elected “team Coordinator”. The second primary character involved in this case study was Mike who’s casual attitude towards his education is completely opposite of Christine’s.

As you can imagine, the group progressed through the five stages outlined in the group development process.

As each group member was assigned an area of responsibility, it became apparent that Mike was not taking this assignment seriously and unconsciously alluded to his intentions to undermine the assignment by making inappropriate jokes and not committing to the meeting schedule Christine had suggested.

In my judgment, the Case Study focused primarily on the Storming stage of the group development process. The text indicates the Storming Stage involves “a period of high emotionality and tension among the group members. “(Schermerhorn 166) As mentioned previously, it was apparent from the beginning of the assignment that Mike was being disruptive and counterproductive to the process when he refused to commit to making the assignment a priority and adhere to the meeting times established by the group opting instead to watch his favorite TV shows.

The next step in the group development process is the Norming stage which consists primarily of where the “members really start to come together as a coordinated unit.” (Schermerhorn 167) I realize each of the members of the group, with the exception of Mike, completed the assigned task they were given. However, it is because of this “exception” that I am not convinced the group depicted in the case study has progressed to the Norming stage due to the lack of commitment demonstrated by Mike and the failure to establish a “harmonious” balance within the group. Furthermore, as the case study moved forward in time to week 5 of the assignment, Mike was consistent in his lazy behavior demonstrated in the Storming stage of the group development process from the beginning of the project assignment.

The principles outlined in the five stages of team development of our text can be applied to analyze the different areas that problems could have developed in this case study. Obviously, it is possible for unforeseen circumstances to occur that will prevent members of a group form upholding their weight in times of crisis. However, some obstacles or circumstances are preventable and with proper planning, potential obstacles can be avoided. To resolve the organizational problems that existed within the group and specifically with Mike, I judge that Christine could have asked the members of the group some basic questions during the Forming stage that would have presented “red flags” and could have been addressed at that time. Questions such as “Does anyone have knowledge or anticipate and potential barriers that will prevent you for completing your individual tasks?” or “How are we going to hold each other accountable for our individual assignments?”

My judgments are Christine projected her work ethic on the other group members completing the assignments based on her personal dedication and commitment to maintaining a high standard of academic achievement. Mistakenly, she presumed that her classmates possessed those same values and qualities as she did; therefore, as a result, she failed to anticipate any potential barriers that could have occurred and given her enough time to make corrections or eliminate them altogether.

Of course, I am not assigning all the blame of the failure of the project on Christine. Mike did possess some culpability in this lack of communication with the group. I judge the lack of communication could have been avoided if Mike had taken a proactive approach to inform the group ahead of time of any conflicts he might have in attending scheduled meetings based on his prior job obligations. This simple initiative on Mike’s part would have provided Christine the opportunity she needed to change the schedule or make alternative plans rather than be disappointed anticipating Mike to attend the meetings.

The text introduces and interesting concept that could explain the primary problem associated with the organization of this group. Based on the information given, the primary problem seems to be associated with Mike and his casual attitude towards completing the assignments and working with the other group members. The FIRO-B Theory identifies differences in how people relate to one another in groups based on their needs to express and receive feelings of inclusion, control, and affection. (Schermerhorn 171)

Mike’s inability to interact with the other group members could be related to his feelings and perceptions of being excluded, especially after him seeing the group eating together in the cafeteria.

Nevertheless, despite his feelings of exclusion I judge that Mike contributed to the problem with his persistent “Social Loafing.” The text identifies Social Loafing as “the tendency of people to work less hard in a group setting than they would work individually”. (Schermerhorn 164) It was obvious that Mike was not working to his full potential because he made no attempts to rectify or correct his behavior and resume his integrity with the group.

Moreover, I also judge that Mike was guilty of what the text identifies as Social Facilitation or the tendency for one’s behavior to be influenced by the presence of others in the group” (John & Wiley pg164). This was evident during the first group meeting where Mike made joked sarcastically about the meeting times. Mike sarcastic remarks were not intended to “lighten” the mood of the other group participants, but rather divert the focus from the project at hand and onto him.

My judgments are there is no one perfect solution to solve this group problem. However, I would propose a few simple modifications that could help resolve the issues associated with the group and produce a more favorable outcome. First, I would have Christine to ask each member what they expected the final outcome to be when the project was completed. By soliciting each member, she would develop accountability and when that portion of the project is not completed then that individual will be responsible for the failure.

Second, the text talks about emergent behaviors and what should be formally defined and expected by the team. Therefore, in the team process, the key is getting the individual parts or members to work together as effective and efficiently as possible to produce the desired outcome. Obviously, Mike was lacking in several areas like punctuality evident by his persistent tardiness and absence during scheduled meeting times. As a result, I judge if Christine had displayed more emergent behaviors and solicited Mike’s input to make him feel more like a respected member of the group and therefore made him more involved. 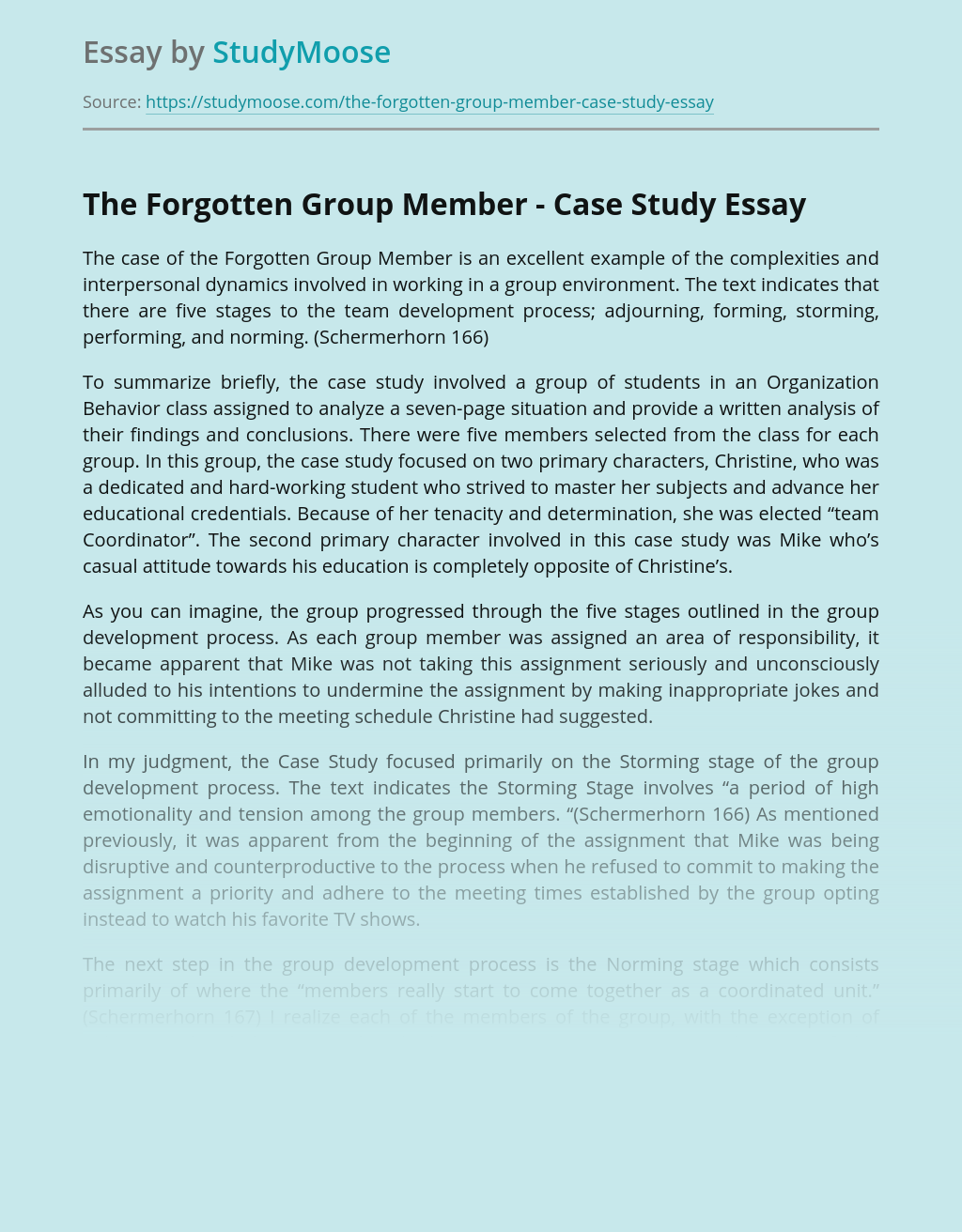