We all know of the famous trial that happen on May 17, 1954, a trial that ended all segregation in school districts all over the United States of America. With this law being enforce by the 14th amendment, it change the whole nation, colored people were now being allowed to enter into real academic schools, and compete for a better future. Of course I am talking about the Oliver Brown v. Board of Education of Topeka, better known as Brown vs. the Board of Education.

Even though this trial was a large stepping stone in the United States, it was not the first attempt at the desegregation of the school system.

The only differences were that the first was fought seven years prior to the second and a difference of ethnicity. Both cases were important in many ways, the only problem is, why is it that only one is credited and the other not?

Both cases were fought for the same reason. Mendez vs. Westminster was the first big court case that stopped segregation in all the schools systems of the state of California. The reason I say this is the stepping stone of Brown vs. the Board of Education is because The Ninth Circuit Court of Appeals ruled in the favor of Mendez vs.

Westminster, which concluded to the desegregation of schools all over California; this was the stepping stone to Brown vs. the board of Education because it was seven years prior to the ruling of Brown.

The Mendez case was used to back up the Brown vs. Board of Education case and helped shape the ideas of a young NAACP attorney, Thurgood Marshall, it very surprising to people to see that Thurgood Marshall was also a lawyer in the Mendez case. You may be thinking that only LULAC (which is a Latino organization) was the only one involved with this case; but as you now know, the NCAAP contributed their part (Maria Blanco, The Lasting Impact of Mendez v. Westminster in the Struggle for Desegregation, Thu, Mar 25, 2010, http://www. immigrationpolicy. rg/perspectives/lasting-impact-mendez-v-westminster-struggle-desegregation). This was great because it forced two different ethnicities and cultures join together for the same cause, which was to have the same education as white individuals and to desegregate school campuses. We are going to be looking more into the history of the trial Mendez vs. Westminster, as well as how and why it started and similarities between both the Mendez case, as well as the Brown Case. On April 1947 there was a decision ruling on the Mendez vs. the Board of Education.

The United States of America Court of Appeals for the 9th Circuit in San Francisco ruled in favor of Mendez and the other parents that stood up to the Westminster School District. Judge McCormick stated that “according to California Laws the segregation of Mexican-American public school children in the absence of a state law mandating their segregation violate California law as well as the equal protection of the law clause of the Fourteenth Amendment to the U. S. Constitution (A History of Mexican Americans in California, Wed, Nov 17 2004 10:00:00 pm PDT http://www. cr. nps. gov/history/online_books/5views/5views5h99. htm)”.

The reason this lawsuit did not go all the way to the Supreme Court was because in the Court’s ruling, it noted that the United States Supreme Court’s segregation decisions were not controlling because, at this time, there was no Hispanic race; In this era all Mexican Americans were considered Caucasian. “The key fact . . . was that California’s Education Code did not specifically provide for segregation of children of Mexican origin. . . . And since California law did not allow for separate Mexican schools, the requirement that children at tend such schools could be considered arbitrary action taken without ‘due process of law. ”(Charles Wollenberg, All Deliberate Speed, 1976, p. 127)

This case could not have gone to the Supreme Court because the law of the state said nothing about segregating Mexican Americans in the Constitution (http://www. cr. nps. gov/history/online_books/5views/5views5h99. htm)”. On Brown vs. the Board of Education it was a little different, because Black was considered a different race; and according to the Plessey vs. Ferguson case of 1896, it states it could segregate a race, as long as it provides a separate but equal law (http://www. cr. nps. gov/history/online_books/5views/5views5h99. tm). Now that we know a little bit more information about the trial, lets learn why all the Mexican American parents got together in order for their kids to get the same education as all the other Caucasian kids in the neighborhood. It all started in the late 1920s-1930s.

As the Mexican and Mexican American population started to increase in California, more white Americans started getting scared; this led to segregation in schools. Not only were schools getting segregated but housing was also being segregated as well (Maria Blanco, The Lasting Impact of Mendez v. Westminster in the Struggle for Desegregation, pg. 2 Thu, Mar 25, 2010). It all started in 1945 with Gonzalo and Felicitas Mendez, who were new to the city and had just moved to a farm in Westminster. The reason they moved to Westminster was because they had leased a farm there from a Japanese family, due to Roosevelt’s executive order 9066. As the Mendez family sent their kids to the public school closest to their neighborhood one early morning, which was the Seventeenth Street School, Westminster, in Orange County.

The parents were shocked when both kids had to return, because they could not attend the school do to their race. They had to attend the Mexican American School that was further away. That was not the only case, the Mexican American schools that were built for the children, were unethical. The 17th Street School was not only brand new, but it also had had a beautiful playground, it had a nice cafeteria, it had good educators that could help the students, and do not forget a non-electronic fence. How could you compare that with Hover, which was the Mexican school?

Hover was old and next to a cow pasture that was made out of old barracks WESTCOTT, JOHN. “OUR LEGACY: MILLENNIUM MOMENTS Family Rejected `Mexican School’; Mendez Vs. Westminster Ended State Segregation Ahead of U. S: MORNING Edition. ” Orange County Register,1999). Robbie who was one of the Mexican American students, that was supposed to attend 17th Street School, but because of his ethnicity had to go to the other school Hover explains his experience, “…It was a terrible little shack, I don’t even remember having any monkey bars or any swings or anything like that to play with.

In fact when we had to eat lunch, we would go outside and eat lunch at the tables that were next to the cow pasture. There was wire around the cow pasture to keep the cows out, but it was electrocuted. There was a little bit of electricity; at that time it was allowed to have a little bit of electricity on the wires to keep the cows from getting too close to the fence… (Espinosa, Martina, California hidden curriculum: institutional Discrimination in the Fourth Grade, pg. 57)”. 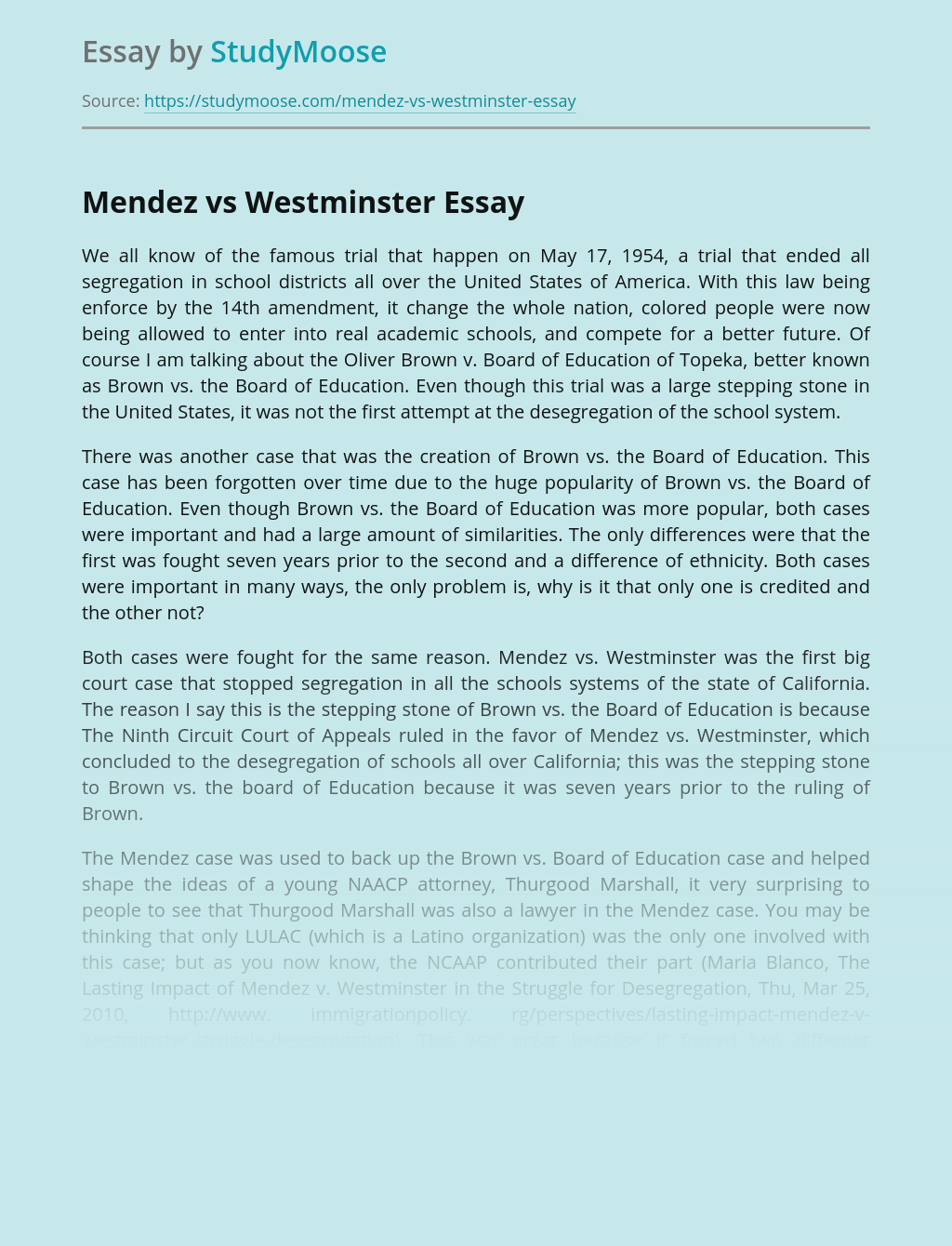