People who say that divorce is not advisable for the Philippines forget or ignore our history. The ethno-linguistic communities of the Philippine archipelago before the Spanish conquest practiced divorce. We had a divorce law from 1917 until August 30, 1950, when the Civil Code of 1950 took effect. The latter law prohibited divorce for Filipinos, and the prohibition continues under the present Family Code. But Muslim Filipinos have always practiced divorce, which Philippine law allowed. Today, divorce continues to be available to Muslim Filipinos under the Code of Muslim Personal Law of the Philippines (Presidential Decree No.

Turn in your highest-quality paper
Get a qualified writer to help you with
“ Pro-divorce Law ”
Get high-quality paper
NEW! AI matching with writer

1083), promulgated in 1977. In the 16th Congress, Gabriela, a women’s party-list group pursuing the passage of a divorce bill. Since the previous congress did not pass House Bill No. 1799, “An Act Introducing Divorce in the Philippines,” the said party-list group will again file the said bill. According to the group, “couples must have the option to avail of remedies that will pave the way for the attainment of their full human development and self-fulfillment and the protection of their human rights.

Upon the other hand, Marikina Rep. Teodoro has filed House Bill No. 37, “An Act Providing for the Protection of Marriage as an Inviolable Social Institution and the Family as the Foundation of the Nation and for other Purposes.” According to the proponent, ‘it ensures that absolute divorce remains unacceptable in the Philippines legal system, and maintains that legal separation can be availed of by spouses in troubled marriage, as provided under the Family Code, so they live independently of each other but without the right to remarry other persons.

” Issue: Whether or not the Philippines is ready for a divorce law.

Yes, the Philippines is ready for a divorce law. Some think that we do not need a divorce law because the Family Code, which applies to non-Muslim Filipinos, already provides for the termination of marriages through “annulment.” This argument misleads. Annulment is a legal term that has a specific meaning. The remedy of annulment is based on specified grounds that occurred at the time of the celebration of the marriage, such as lack of parental consent and vitiated consent (as when a person married another at gunpoint). The remedy of annulment expires, and the defect may actually be cured by ratification through free and voluntary cohabitation.

When people speak of “annulment” as a means of terminating a marriage, they actually refer to the remedy under Article 36 of the Family Code. Article 36 declares that a marriage is void from the beginning when one or both spouses are psychologically incapacitated to perform the essential marital obligations. Under Article 36, a court does not terminate a marriage but only declares it void. One must prove psychological incapacity by presenting evidence on three essential elements of the condition: that it already existed before the marriage; that it is grave or serious; and that it is incurable. To do this, one usually needs the help of a psychiatrist or psychologist to testify as an expert witness.

But what if the marriage worked in the first ten years, but later the parties drifted apart for some reason or another? What if the other spouse was violent, unfaithful, indolent, or an alcoholic or a drug addict? What if one spouse abandoned the family? These may not be used for “annulment,” or for a marriage to be declared void under Article 36, unless it can be proved that these are manifestations of psychological incapacity that predated the marriage.

A divorce law will provide a remedy that Article 36 does not. Divorce does not concern itself with validity or invalidity of a marriage. It terminates a marriage based on a ground that occurred during the marriage, which makes the marital relationship no longer tenable, regardless of the spouse’s psychological constitution. A divorce law will provide a straightforward remedy to a marital failure. It will benefit Filipinos wherever they are.

A PETITION FOR DIVORCE MAY BE FILED ON ANY OF THE FOLLOWING GROUNDS:

(1) THE PETITIONER HAS BEEN SEPARATED DE FACTO FROM HIS OR HER SPOUSE FOR AT LEAST FIVE YEARS AT THE TIME OF THE FILING OF THE PETITION AND RECONCILIATION IS HIGHLY IMPROBABLE;

(2) THE PETITIONER HAS BEEN LEGALLY SEPARATED FROM HIS OR HER SPOUSE FOR AT LEAST TWO YEARS AT THE TIME OF THE FILING OF THE PETITION AND RECONCILIATION IS HIGHLY IMPROBABLE;

(3) WHEN ANY OF THE GROUNDS FOR LEGAL SEPARATION UNDER PARAGRAPH (A) OF THIS ARTICLE HAS CAUSED THE IRREPARABLE BREAKDOWN OF THE MARRIAGE;

(4) WHEN ONE OR BOTH SPOUSES ARE PSYCHOLOGICALLY INCAPACITATED TO COMPLY WITH THE ESSENTIAL MARITAL OBLIGATIONS;

(5) WHEN THE SPOUSES SUFFER FROM IRRECONCILABLE DIFFERENCES THAT HAVE CAUSED THE IRREPARABLE BREAKDOWN OF THE MARRIAGE.”

Even when couples start out well in their marriage, political, economical and social realities take their toll on their relationship. Some are not prepared to handle the intricacies of the married life. For a large number of women, the inequalities and violence in marriage negate its ideals as the embodiment of love, care and safety and erode the bases upon which a marriage is founded. The marital relations facilitate the commission of violence and perpetuate their oppression. Official figures in 2009 showed that nineteen women were victims of marital violence everyday. Among the different forms of violence and abuse against women committed in 2009, wife battery ranked highest at 6,783 or 72% according to the Philippine National Police (PNP). The Department of Social Welfare and Development (DSWD) likewise recorded marital violence as highest among different forms of violence against owmen at 1,933.

Previous reports of the PNP about three of ten perpetrators of violence against women were husbands of the victims. Husbands accounted for 28 percent of the violence against women crimes. Given these realities, couples must have the option to avail of remedies that will pave the way for the attainment of their full human development and self-fulfillment and the protection of their human rights. Existing laws are not enough to guarantee and protect these rights. To quote the Women’s Legal Bureau, Inc., a legal resource NGO for women: “The present laws relating to separation of couples and termination of marriage are inadequate to respond to the myriad causes of failed marriages. Particularly, the remedies of declaration of nullity and annulment do not cover the problems that occur during the existence of marriage. Legal separation, on the other hand, while covering problems during marriage, does not put an end to marriage.”

“Since August 3, 1988, couples have been given a way out of failed marriages through Article 36 of the Family Code… The remedy provides under Article 36 is declaration of nullity of the marriage. The article voids a marriage where one party is “psychologically incapacitated” to comply with the essentials of marital obligations. Consistent with the concept of void marriages (where the remedy is declaration of nullity), the law requires that the incapacity must have existed at the time of the celebration of the marriage… In practice, Article 36 has become a form of divorce, as valid marriages are declared void every day in the guise of “psychological incapacity.” The innumerable Article 36 cases brought to trial courts is an indication of the elasticity of Article 36 to accommodate the needs of many couples desiring to terminate their marriages. It is proof that divorce is needed in the Philippines. Article 36 provides a remedy only for spouses who can prove “psychological incapacity”.

The concept certainly cannot accommodate all cases where divorce would be necessary. What we need is a divorce law that defines clearly and unequivocally the grounds and terms for terminating a marriage. That law will put an end to the creative efforts played daily in courtrooms across the country to accommodate a wide range of cases in order to prove “psychological incapacity.” (Women’s Legal Bureau, Inc., The Relevance of Divorce in the Philippines, 1998) Divorce does not concern itself with validity or invalidity of a marriage. It terminates a marriage based on a ground that occurred during the marriage, which makes the marital relationship no longer tenable, regardless of the spouse’s psychological constitution. A divorce law will provide a straightforward remedy to a marital failure. It will benefit Filipinos wherever they are. “The law should only give people a choice, to be exercised according to their own personal beliefs.”- Luzviminda Ilagan The Catholic Church need not worry. The institutions of marriage and the family have survived to this day, as they will survive a Philippine divorce law. We are a secular state, where no religious group has the right to define law or policy for the entire population. There is not one but a plurality of beliefs in Philippine society.

The law should only give people a choice, to be exercised according to their own personal beliefs. Therefore, to be set free from an unhappy marriage is to allow citizens of any country to form their own lives. Freedom is something we all want. To allow a country to set the law for such freedoms is nothing more than an act which is incomprehensible. There are record amounts of unhappy marriages in the Philippines. Every day, Filipinos get married, bear children, separate and get into other relationships, regardless of what the law says. The lack of a divorce law for non-Muslim Filipinos complicates further the marital and family problems of many Filipinos. Our government has clearly failed to respond to their needs. If the country wants to move forward, it has to confront the realities of marital and family life of Filipinos in the Philippines and abroad. It has to pass a divorce law now. 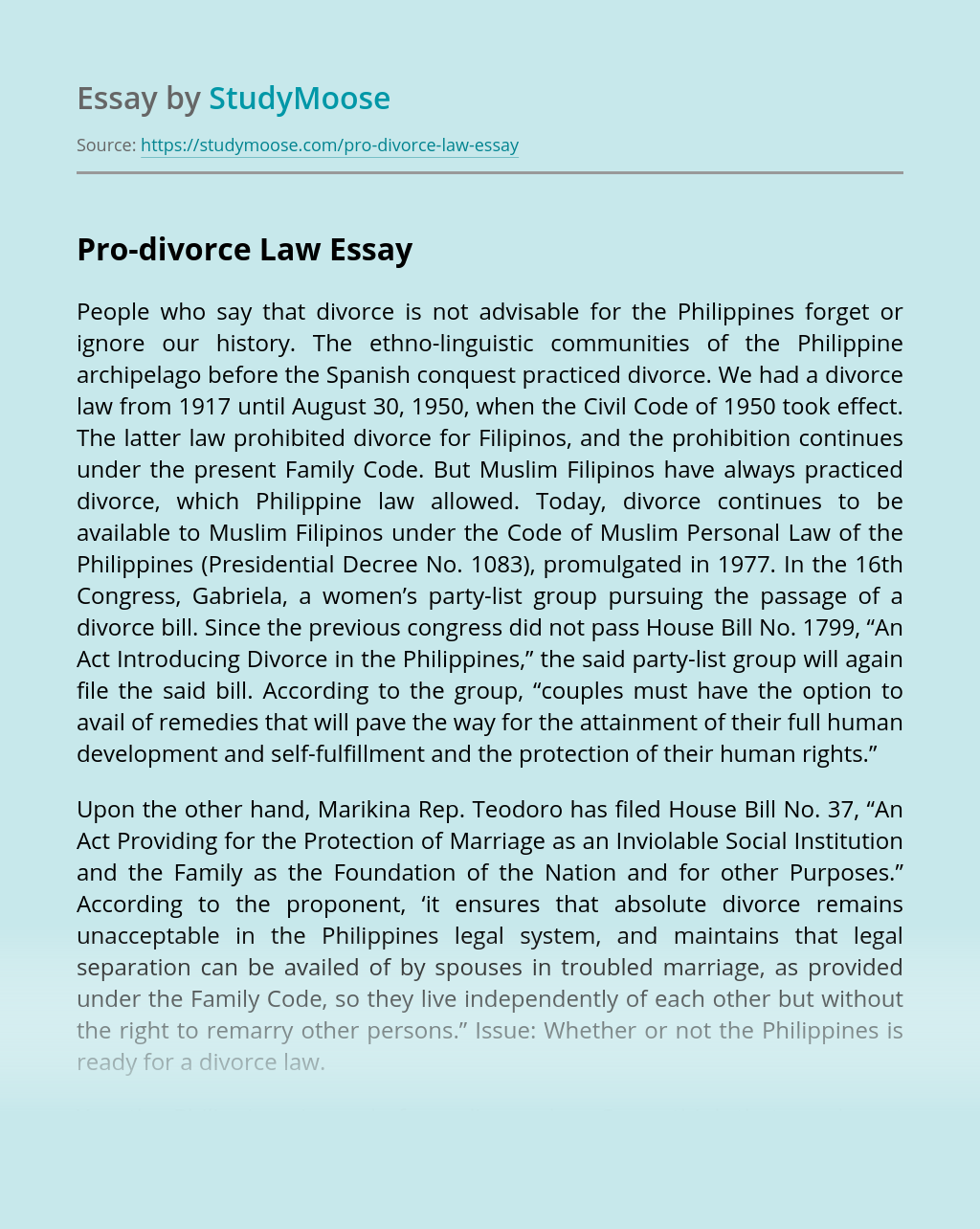 Turn in your highest-quality paper
Get a qualified writer to help you with
“ Pro-divorce Law ”
Get high-quality paper
Helping students since 2015
Stay Safe, Stay Original