Divorce in the Philippines

Everyday, we hear stories from the news about women being abused by their husbands up to the point of causing death to the abused. It is also never new to hear a spouse having extramarital affairs and those other stories of infidelity and violence. We may sometimes first-handedly witness it in our own community, neighbors and friends, and even in our own homes. Come to think of it, why stay on this kind of unhappy relationships?

According to the Philippine Commission on Women website, “physical injuries and/or wife battering remains to be the most prevalent case across the twelve-year period, from 1997–2009, accounting nearly half (45.

Don't use plagiarized sources.
Get Your Custom Essay on Divorce in the Philippines Just from $13,9/Page

5 percent) of all reported violence against women (VAW) cases nationwide.”

Yes, we already have annulment and legal separation in the Philippines but these systems are nothing but flawed—allowing only separation for such grounds that makes marriage void, in the first place. Meaning, this only considers those cases of psychological incapacity, impotence, marriages between collateral blood relatives, incestuous marriages, mistaken identity, and minority.

However, spousal abuse and infidelity are not grounds for the annulment of marriage. This does not answer the rampantly occurring cases of violence and infidelity that leaves women rather helpless.

Philippines is among the last two countries in the world that do not yet legalize divorce. Gabriela Rep. Liza Maza first filed a divorce bill in Congress in 2005. The bill, known as House Bill 1799, or An Act Introducing Divorce in the Philippines, was re-filed in August 2010 by Gabriela Women’s party-list. It should be no wonder now why it is the women who are fighting for the passage of this bill because they are the object of infidelity and violence.

Lawmakers have identified several grounds for divorce: when the married couple has been separated for five years de facto and reconciliation is highly improbable; the couple has been separated for two years before filing for divorce; when the grounds for legal separation (infidelity, psychological incapacity and irreconcilable differences) are present resulting to an irreparable marriage.

According to a Social Weather Station survey conducted in March 2011, “50 percent of adult Filipinos agree and 33 percent disagree with the statement: ‘Married couples who have already separated and cannot reconcile anymore should be allowed to divorce so that they can get legally married again.’” In 2005, a similar survey was conducted which showed that 43 percent of adult Filipinos were in favor of divorce and 44 percent were not. From the statistics, we can conclude that Filipinos are starting to become open-minded with this issue and now accepts divorce as an option for failed marriages.

According to Luzviminda Ilagan and Emerciana De Jesus, representatives of Gabriela Women’s Party List, “The sanctity of marriage is not based on the number of marriages existing but on the quality of marital relationships; when a marriage is no longer viable, divorce should be an option.”

Indeed, why stay in a marital relationship where it no longer foster love between husbands and wives? It is now time to accept the rampantly occurring fact that some marriages work and some unfortunately don’t. In cases where a union is more harmful than beneficial, a divorce can be a benevolent and less hurtful way of severing ties.

Divorce in the Philippines. (2016, Apr 07). Retrieved from https://studymoose.com/divorce-in-the-philippines-essay 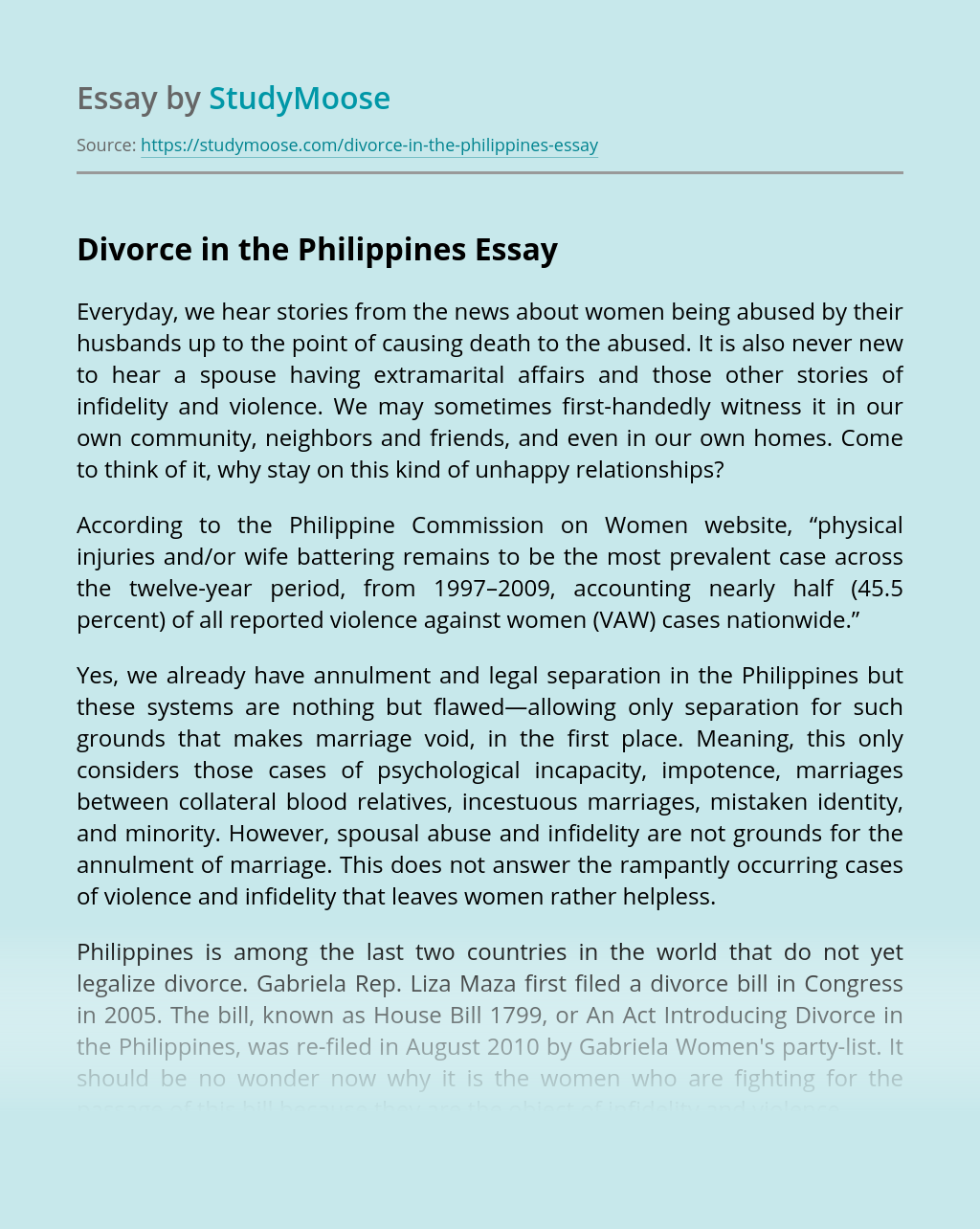 Modelling and Forecasting Electricity Consumption of the Philippines

In the Philippines, electric power is becoming the main energy form relied upon in all economic sectors of the country. As time goes by, while different establishments and properties were built and developed, the demand for domestic electricity consumption within the country accelerates. Energy consumption is an important index of the economic development of a...

This Case Study is about Puerto Princesa, Palawan nature based attraction. The case study is being made for having a broader knowledge about their weaknesses, strengths, community, sustainable place, and any other terms relating to tourism. Come up with a hypothesis, methodology, results, analysis and conclusion. Resolve or give suggestion, recommendation for the negative results...

View sample
Get Essay
History of Death Penalty in the Philippines

The history of the death penalty was extensively discussed by the Supreme Court in People vs. Echegaray.[1] As early 1886, capital punishment had entered the Philippine legal system through the old Penal Code, which was a modified version of the Spanish Penal Code of 1870. The Revised Penal Code, which was enforced on 1 January...

View sample
Religion and Politics in the Philippines

I. What Struck Me? i. The Roman Catholic Church as an organized and institutionalized religion has had a significant role in and impact on Philippine political life. In recent times it served as the primary locus against the dictatorship of the Marcos regime and facilitated the 1986 People Power revolt that restored democratic structures and...

Historical Background Between 1941-1945, Philippine Literature was interrupted in its development when the Philippines was again conquered by another foreign country, Japan. Philippine literature in English came to a halt. Except for the TRIBUNE and the PHILIPPINE REVIEW, almost all newspapers in English were stopped by the Japanese. This had an advantageous effect on Filipino...