Below is a free essay on “Divorce Bill” from Anti Essays, your source for free research papers, essays, and term paper examples.

The Philippines and Vatican City are the only Catholic countries and in fact the only two countries which do not permit divorce. Though The Philippines is a democratic country, and over the years, the evolution and transformation of the ways of life and the ways of thinking there have undergone dramatic changes, adopting other cultures and traditions, the nation remained religiously contained and oriented, which indicates that the majority of Filipinos still value their beliefs in the Supreme Being.

Don't use plagiarized sources.
Get Your Custom Essay on Divorce Bill Just from $13,9/Page

A Divorce Bill, also known as House Bill 1799, is currently a controversial hot topic in the country. Though annulment, which is filed under Article 36 of Family Code in the Philippines, is duly being applied and allowed in the country, most of those who are pro-divorce would say that is not enough intervention for those couple who can’t live together anymore.

Annulment is too costly for the marginalized sectors or common people to get approved in the Supreme Court. Thus, it only means legal separation but not actually ending marriage. This involves a claim that a marriage even from the beginning was defective and is thus null and void. Infidelity, battery or abuse, gross irresponsibility, homosexuality, impotency, and some sexually transmitted diseases in either spouse can be grounds for annulment. Furthermore, the increasing rate of abuse of women and children is an ongoing reason why people want divorce to be legal in the country. There are about 22 women per day reporting physical abuse by their spouses and that in itself is an indication that it is about time to pass a divorce law, according to the pro-divorce. For the anti-divorce, however, the sanctity of marriage is always highly regarded in respect to divine law made from the Holy Scriptures. The fear of God and the religious belief system remains intact among the majority of Filipinos, be it non-Catholic Christians or Roman Catholics. Thus, this is… 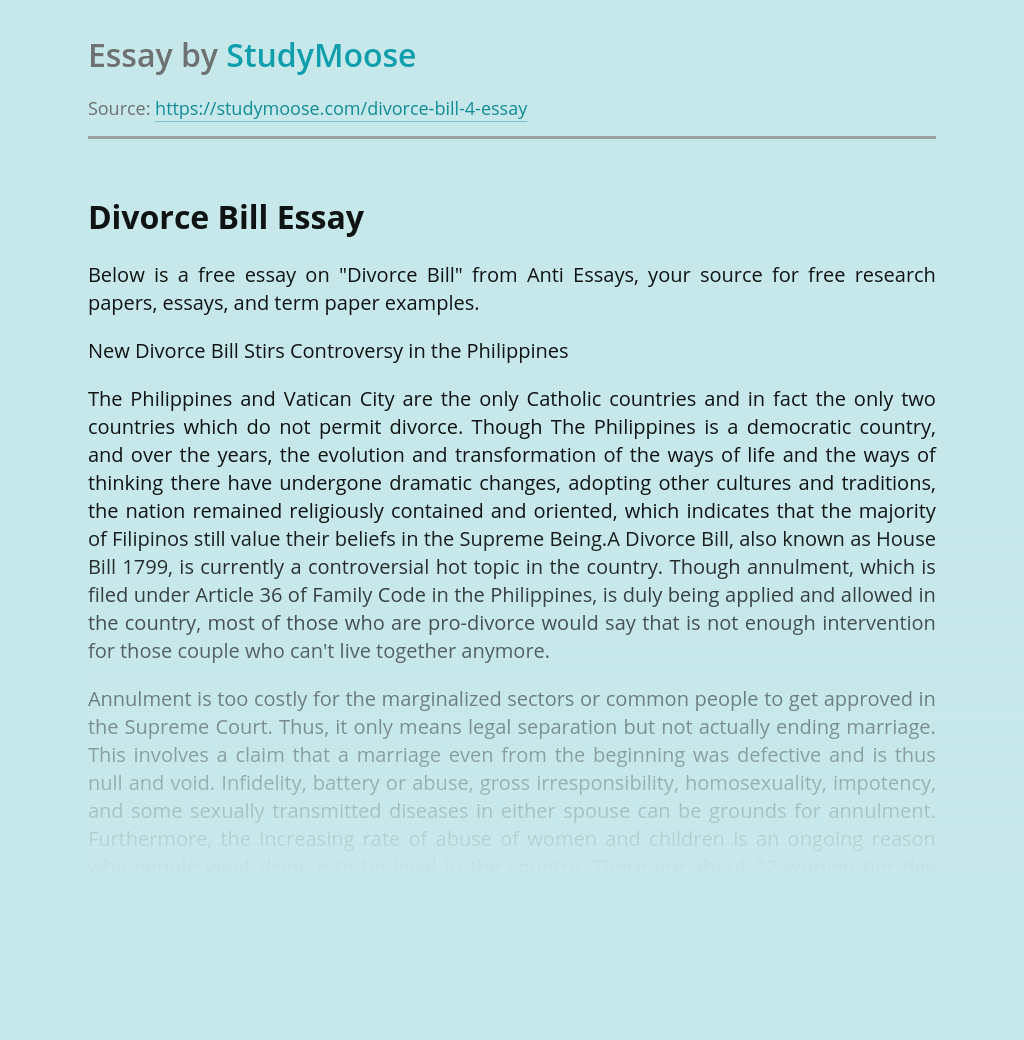 American literature is characterized by several genres of literature which represent many different phases in American history and culture.  Among these are Puritanism and Transcendentalism.  These two movements share certain characteristics while they oppose each other for other reasons. The Puritans were a group of individuals that were very strict, radical Protestants that gathered as...

Get Essay
Harlem and “A Dream Deferred”

Harlem poetry is one of the outputs of the Harlem Renaissance period in American History. During these times, African-Americans started to have a growing influence in politics, literature, music, culture, and society all over the country. It was also a time characterized by oppression and racial discrimination, and these societal issues fueled the Harlem poetry....

The Writing On The Wall (is graffiti an art form?)

“Graffiti is an art form” Or is it? There are many arguments for and against graffiti. In this essay, I will try to tackle the various aspects of these arguments, giving proof along the way. My interest in graffiti is purely artistic; I feel this essay may be more biased towards graffiti as an art...

Cadbury’s Dairy Milk has recently launched a new campaign ” Shubh Aarambh” ( meaning Auspicious Beginning ). The campaign is the refined version of the earlier Payday campaign which evoked mixed response from the Ad analysts and consumers. The Shubh Aarambh campaign reinforces the occasion based positioning of Dairy Milk. The brand has been trying...