Causes and Consequences of Marital Breakdown and Divorce

Marriage is a complex interpersonal relationship. Among the reasons for marriage are emotional, financial, spiritual, and religious ones. In some religions marriage is considered to be a sacred bond between a man and a woman and to break it up is viewed as a blasphemous act. However, nowadays divorce is becoming an everyday process and people do not even blink if a marriage fails. Marital breakdown generally arises from a variety of causes. This essay deals with some of these causes, probable consequences and possible solutions of marital breakdown.

Don't use plagiarized sources. Get your custom essay on
“ Causes and Consequences of Marital Breakdown and Divorce ”
Get custom paper
NEW! smart matching with writer

There are many reasons why some marriages last and others break down. According Talcott Parsons and Ronald Fletcher 1 the increasing number of downfall of marriages is rooted in the fact that marriage means too much for people. Their expectations are too high to be reached and it may lead to a split up. Hart 2(1976) says that “the adaptation of the family to the requirements of the economic system has placed a strain on the marital relationship”.

Edmund Leach 3(1967) states that if a family is overwhelmed by emotions, it can disturb the relationship between its members.

Another viewpoint is that if emotions, mainly love disappears from a relationship, it is doomed to fall apart (Dennis 4, 1975). In the past the Church was against divorces, it preached that: Those whom God hath joined together, let not man put asunder. Nevertheless, due to the raising number of divorces, the Church had to take from its strict morality. Goode 5(1971) argues that today people wonder about “‘Is this a more useful or better procedure for my needs?'” instead of thinking about the morality of divorce.

A highly praised psychologist and researcher John Gottman 6, PhD. demonstrated that there are four stages of marital breakdown which he named “The Four Horsemen of the Apocalypse”. The first stage deals with the conflicts and complaints between the spouses. Many couples have disagreements once in a while but for those who quarrel non-stop and cannot find a compromise it may result in filling divorce papers. The second stage of the breakdown illustrates the decrease of emotional bond. As an example Gottman shows us how love and passion can turn into disdain, even hatred. If a married couple constantly argues, it does not necessarily mean that they have unsolvable problems. They still can respect each other. But as soon as they start to feel contempt toward each other, “the marriage is on shaky ground”.

Contempt leads to the third stage of this process, which includes the partners’ defensive behavior. It concerns mainly men who become unfeeling after many quarrels and start to react more sharply during the heated points of the arguments. Over time both men and women realize that “that they cannot resolve their differences, and that any attempts at resolution will result in further overwhelm, hurt or disappointment”. After reaching this defensive stage, comes the fourth and final “horseman” which can be characterized by the loss of basic trust. This stage is named “Stonewalling” where one of the partners hides behind a wall to protect himself/herself from the other.

Marital breakdown can have serious effects on both men and women. Losing the bond that tied two individuals together may result in deep depression, resentment and even in suicidal thoughts. Another outcome might be that after the breakdown these people would lose their trust in others. Loss of character is one more consequence. When one of the partners realizes that everything that he/she worked for – all the willpower, money and effort which was placed into building a relationship and a home – has led to separation, they learn that they are no longer who they thought they were.

Marital breakdown causes major disruptions to the family unit. This instability can be frightening especially to the children and it can have long-term effects on them. Children always sense if there is something going on with their parents. Many of them do not know how to handle situations where one parent derogates the other or the parents argue about every little thing right before them. These experiences might have negative effect on the children’s personality and may cause problems in finding a partner in the future.

To sum it all up, there are many causes that can result in marital breakdown. Some value marriages too much, others, on the contrary, do not care about it. If love is replaced by disdain and hatred, than there is not much of the marriage that can be saved. The consequences are mostly psychological – going through a divorce/separation is one of the most stressful situations one is likely to experience. However, the most dangerous effect is felt by the children. They do not understand what is going on, and many blame themselves for their parents’ splitting up. In my opinion these couples instead of immediately thinking of divorce should find a counselor to solve their problems. If they care enough about their relationship and their children, they will do anything in their power to work out their disagreements.

Causes and Consequences of Marital Breakdown and Divorce. (2016, Aug 06). Retrieved from https://studymoose.com/causes-and-consequences-of-marital-breakdown-and-divorce-essay 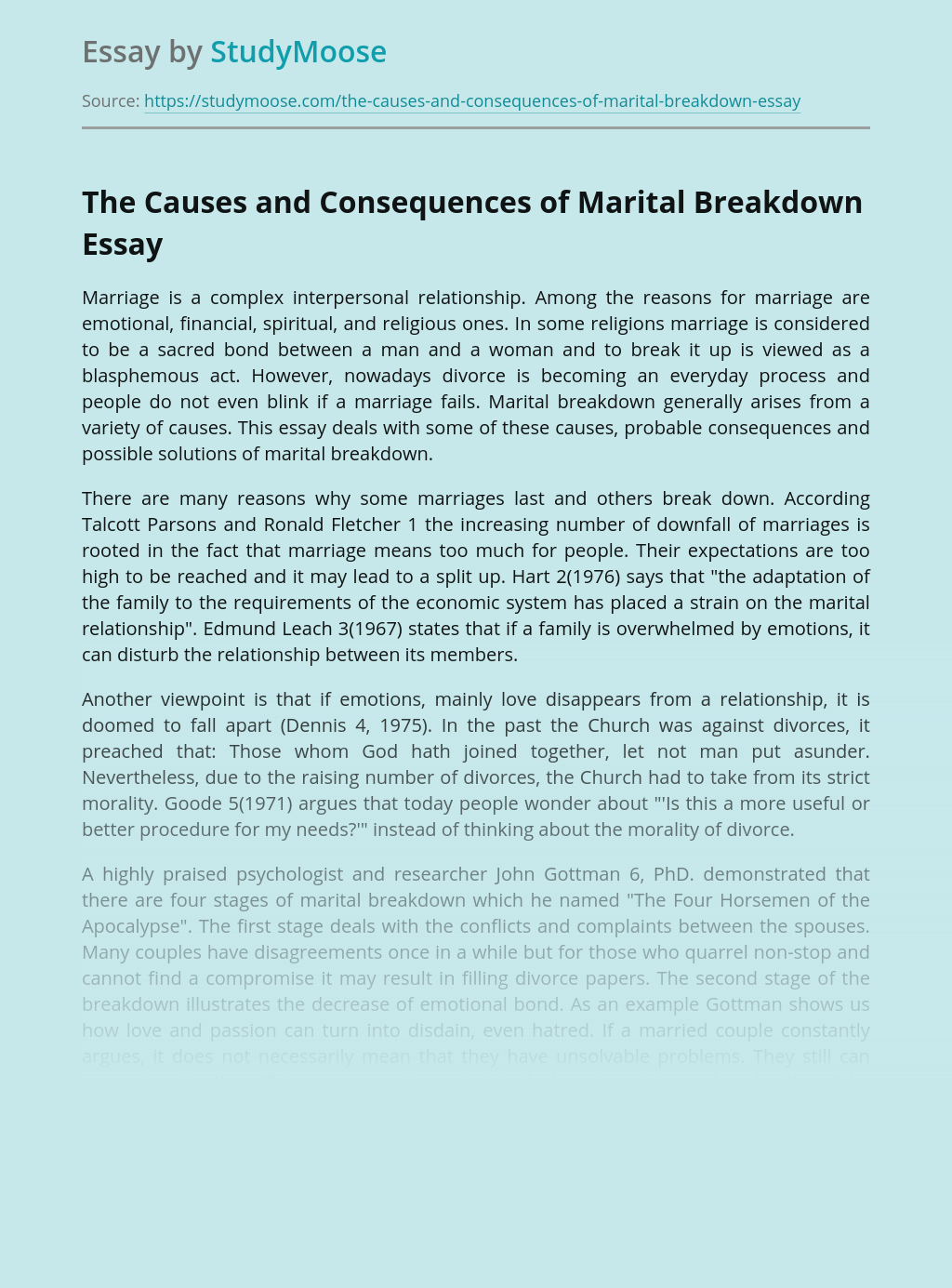