To what extent does Golding use foreshadowing in Chapter 1 of Lord Of The Flies?

Foreshadowing in Chapter 1 of Lord of the Flies
Chapter 1 of Golding’s book ‘Lord of the Flies’ establishes the novel as a political allegory. As a general over view the novel dictates the need for political organisation and amplifies the main differences between human nature and human nurture. The opening chapter of the novel establishes the idea that group of the boys abandoned on the island have no society, rules or concerns beyond individual survival. It is clear from the beginning of the novel that this new found ‘society’ was bound to deteriorate as the plot of the novel continues.

Don't use plagiarized sources. Get your custom essay on
“ To what extent does Golding use foreshadowing in Chapter 1 of Lord Of The Flies? ”
Get custom paper
NEW! smart matching with writer

This is foreshadowed by the varied use of dark imagery to suggest the idea of trouble to be coming in later events in the book. When Ralph decides to go swimming in the lagoon located on the island he describes the lagoon to be ‘warmer than his blood’; Connotations of blood suggests concepts of war, violence and sinister acts such as murder – which can then be seen to foreshadow the following murders of Piggy and Simon in the latter chapters of the novel.

This can be also supported by the re-occurring defective weather in the opening chapter – it could suggest that later events will follow the same degree of defectiveness (such as the murder of Simon). The use of aphotic language continues throughout the chapter such as when the island is primarily described to the reader by the narrator.

When Piggy and Ralph meet it is described that ‘the ground beneath them was covered with sparse grass, torn everywhere by the upheavals of fallen trees, scattered with decaying coconuts and palm saplings.

Behind this was the darkness of the forest proper and open pace of the scar’. Although no fear is present within the boys, the exaggerations of the negative aspects of the island inform the reader subtly that there will be something ‘to fear’. The use of the words ‘decaying’ and ‘fallen’ can be seen to foreshadow the idea of the created camaraderie between the boys will also follow the path of the island – that it will soon fall/deteriorate through the plot of the novel. Though the use of dark/violent imagery in the first chapter of the book seems to depict the future of the boys well, it can also be used to foreshadow more specific feuds such as the ones between Jack and Ralph. It is palpable from the first time the 2 characters Jack and Ralph meet that there will be further tension and disagreements in the latter chapters of the novel. In the first introduction of the Choir Boys they are originally depicted as a ‘creature’: ‘The creature was a party of boys’. This choice of the word ‘creature’ could foreshadow what the group of boys slowly become throughout the novel and the supporting collection of ‘crepuscular’ connotations and vocabulary emphasise the villainous characteristics of the choir boys. By choosing choir boys as a representation of the antagonists of the novel (with Jack the main adversary of Ralph) it challenges the idea of ‘innocence’ that is usually inhabited by Choir Boys. Each member of the choir boy group is described to be wearing ‘black cloaks’ which are decorated with a ‘long silver cross’. By creating the choir boy group to all be wearing uniforms it creates a mob mentality in the group which alludes military dictation within the aggregation with Jack as their so called ‘dictator’. Jack has obvious power and hierarchy over the group as presented when he calls ‘Choir! Stand Still!’- With an immediate response from his actions.

There is then an obvious tension between Ralph and Jack when Ralph obtains overall leadership of the now combined 2 groups of the choir boys’ and Ralph’s previously assembled group. When Ralph obtains full leadership it can then foreshadow future disputes between the two such as when Jack is not able to kill the pig in the hunt and Ralph questions him why he wasn’t able to. This constant beating of Jack from Ralph would accumulate levels of anger and frustration within Jack which could predict a future outrage from Jack. At the end of the chapter it is said that for Jack ‘Next time there would be no mercy’ which could foreshadow the future planning of murder for Ralph on the island.

To what extent does Golding use foreshadowing in Chapter 1 of Lord Of The Flies?. (2016, Apr 15). Retrieved from https://studymoose.com/to-what-extent-does-golding-use-foreshadowing-in-chapter-1-of-lord-of-the-flies-essay 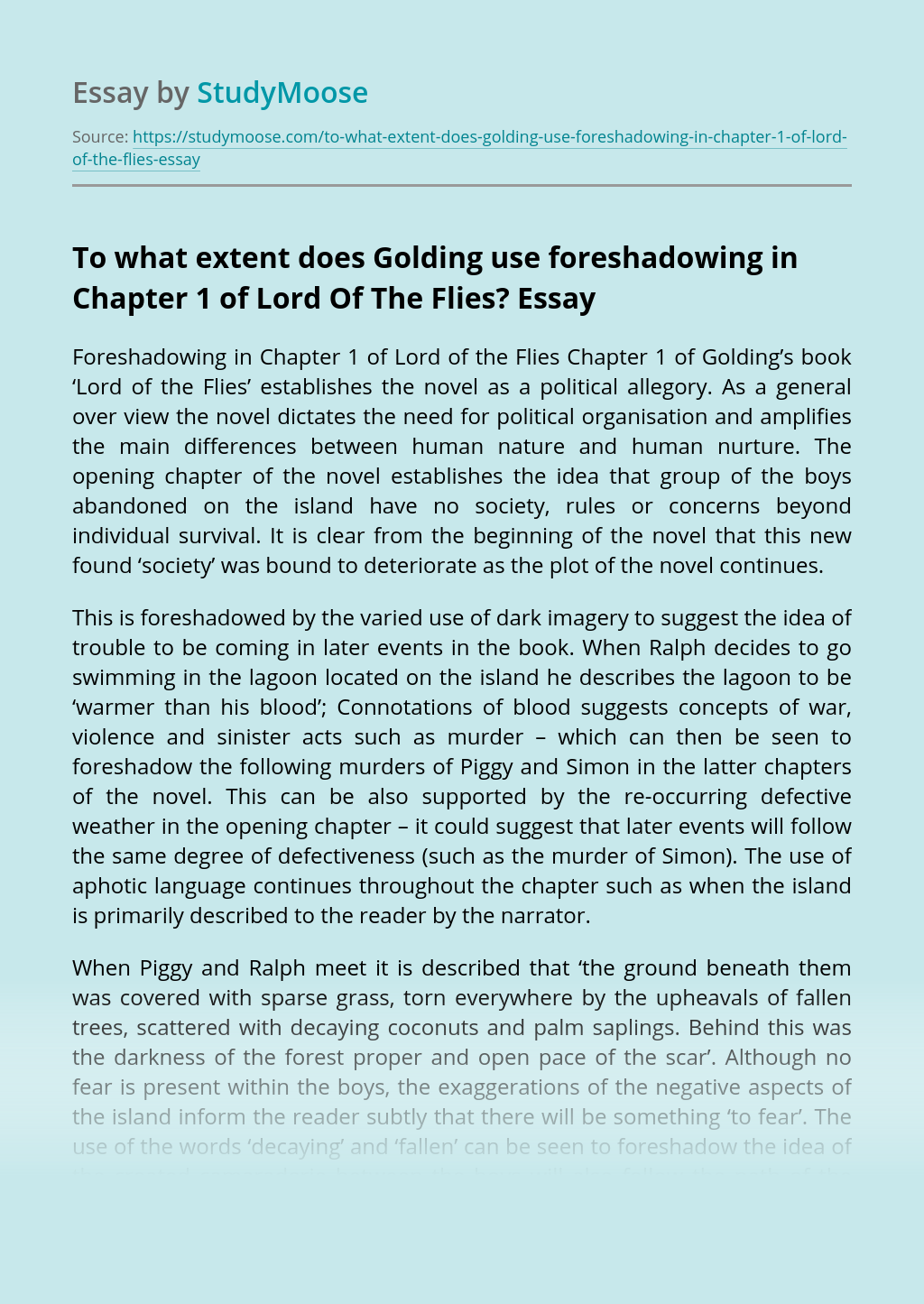