In this short essay I will unfold how the sense of forshadowing employed in Kate Chopin’s story develops and eventually turns it into the ultimate concealed irony. In a sense Desiree’s Baby is a story that reveals itself prematurely throughout the narrative which allows us to guess its conclusion at several moments when the narrative voice includes literary devices to help the narrative flow.

But how does this foreshadowing help the reader to infer the ending?

One of the first moments of these foreshadowing episodes is the fully detailed description of L’Abri atmosphere.

Don't use plagiarized sources. Get your custom essay on
“ “Desiree’s Baby” Foreshadowing ”
Get custom paper
NEW! smart matching with writer

The first hint of this foreshadowing hits the reader when Madame Valmonde arrives to the plantation _”When she reached L’Abri she shuddered at the first sight of it, as she always did.”_ This statement makes us redirect our attention to obscurer matters, why is it that Madame Valmonde shudders? The harsh and cold touch that L’Abri’s atmosphere represents is perhaps linked to the fact that for many years the land has been without the touch of kindness that a woman, in this case a mistress, gives.

Accustomed to the harsh treatment of young Aubigny the workers of the plantation “had forgotten how to be gay” Why is it that the workers had forgotten how to be gay? This could be answered by the second glimpse that reinforces the theory of the literary devices. This characterization is set on the personality and description of the complexion of Armand. We can make several assumptions towards the theme of race and trouble that plague the story but in the most obvious assumptions lies our next foreshadowing.

_”Armand’s dark, handsome face had not often been disfigured by frowns since the day he fell in love with her”._ The statement is not quite clear, a racist man with obscure adjectives? The previous characterization of Armand sets him with a rough behavior towards his workers at the plantation but it is in this description where the _hubris_ of the story lies. Armand’s pride and arrogance towards being white is the irony that unleashes our next foreshadowing at the hands of Desiree herself. _””Look at my hand; whiter than yours, Armand,” she laughed hysterically.”_ Desiree’s actions and her attempts to obtain an explanation from her husband are anything but futile to the reader, the function that these attempts fulfill is the sealing of Desiree’s destiny, we already know what is to come. By the time of this statement, the story has already reached its climax, the foreshadowing that will make way for the unavoidable conclusion and the revelation of the boy’s true nature will lead to the only possible solution: Desiree’s Oblivion. Sealing at last the dramatic irony presented to the audience.

The story is plagued with this sense of _calmn before the storm._ Several of these foreshadowing moments are crucial for the development of the ending. Beginning with Desiree’s feeling of the atmosphere at L’Abri when her child is three months old is one of them. Desiree awakes feeling “Something in the air” leading to the mysterious attitude that Armand has been taking towards his family, his absentism, the odd visits of unwanted characters and his return to a more savage way of treating the plantation slaves. This description ends with another intended foreshadowing: _”Desiree was miserable enough to die”._ This leads us through foreshadowing to the resolution of a dramatic ending, we perceive something that Desiree chooses to forget, instead of that she takes her child and is never seen again.

The most obvious foreshadowing, the one that everyone knows that is going to be revealed is what creates the ultimate irony. The fact that the past of Desiree is wrapped in mystery only exists to form cohesion to Armand’s personality. Armand a racist man plagued with hatred and confusion towards the race that he enslaves is revealed through a letter. A letter which holds the statement, that it was he who in his blood carried the “sin” that ultimately destroyed his family. By that time the irony is complete Desiree is beyond reach an Armand lies beyond salvation, he destroyed the bond that united them and now has to remain alone. 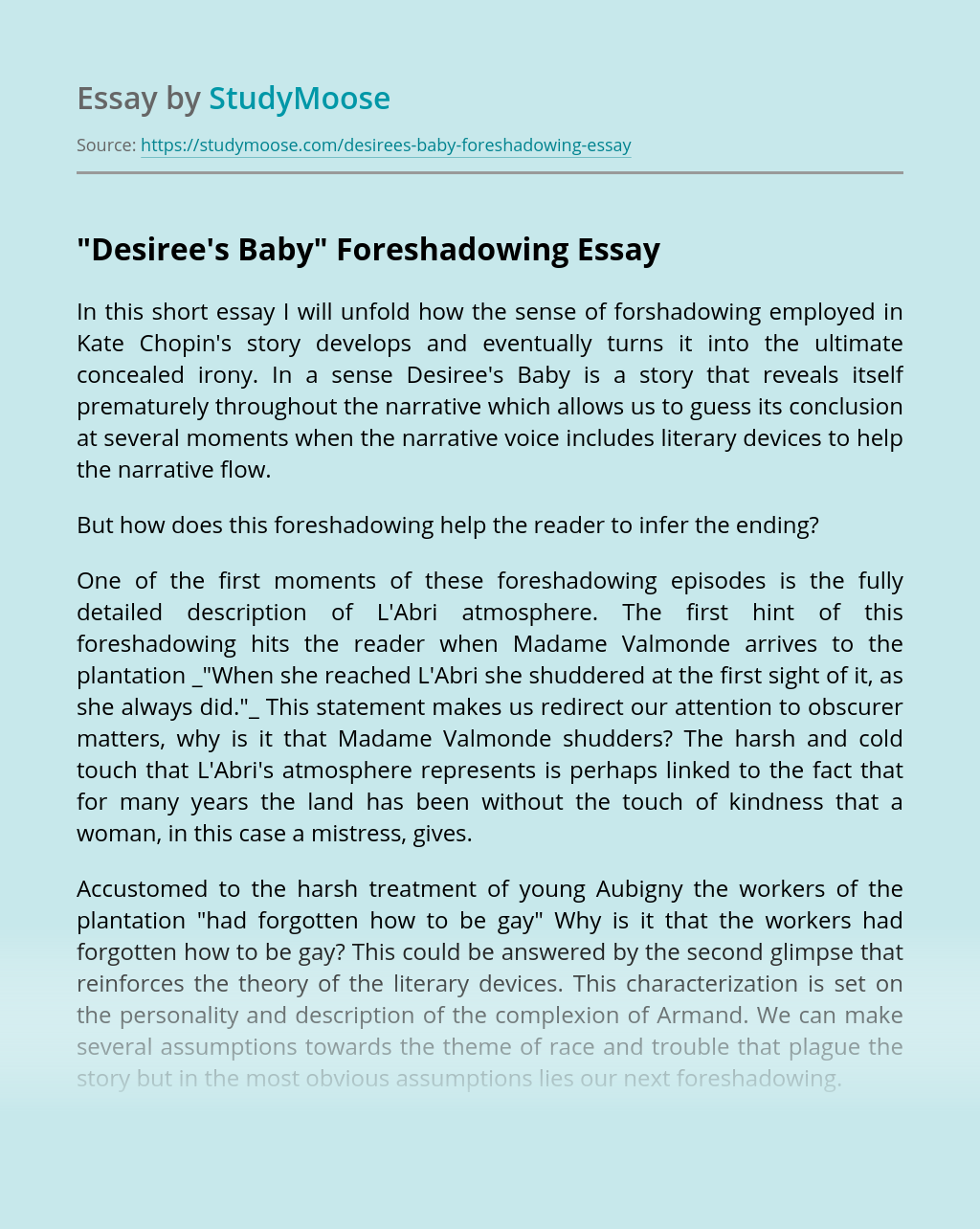