In Kate Chopin’s “Desiree’s Baby”, she describes the tragic tale of Desiree and her baby from life to death. She uses powerful imagery and symbolism to create a dark and heavy atmosphere in attempt to evoke powerful emotion from the reader. Chopin does a formidable job as she uses descriptive imagery to lay a foundation for the atmosphere to build off of. Several points in the story where she effectively creates this atmosphere would be when she brings in the pillars and describes the plantation, when Desiree discovers the truth (or so she thinks) of her babies race, when she walks into the bayou and dies, as well as the point in which her husband realizes that he had misplaced the blame of his own faults on his wife.

`When the story first begins, Chopin focuses mainly on the physical setting of the Valmonde plantation. As she describes the entire house, “The roof came down steep and black like a cowl, reaching out beyond the wide galleries that encircled the yellow stuccoed house.

Big, solemn oaks grew close to it, and their thick-leaved, far-reaching branches shadowed it like a pall” she evokes a feeling of sadness about the reader. She also describes the stone pillars, which represent darkness towering over Desiree on several occasions throughout the story. Before Chopin really begins describing the characters in great detail, she creates an atmosphere strictly produced by plantation on which the story takes place (Paragraph 6, lines 7-11).

At the turning point of the story, when Desiree comes to the realization that her baby is of mixed race, she is overcome with shock and cannot comprehend what is happening.

Chopin describes her as though her “blood turned like ice in her veins” and “She was there like a stone image: silent, white, motionless”. This bone chilling description only scrapes the surface of what Desiree could possibly be feeling like. The portion of the story only adds to the tension that holds throughout the atmosphere even though Chopin attempts to release it through this turning point of the crisis (Paragraph 19, lines 13-14, Paragraph 31, line 3).

As the climax of the story hits, Desiree walked with her baby into the bayou as “she disappeared among the reeds and willows that grew thick along the banks of the deep, sluggish bayou; and she did not come back again.” As she attempts to relieve her husband of this ordeal, which she had previously placed upon him, the reader is left feeling helpless, as Desiree gives up her and her baby’s life to ease the pain of her husband. As Chopin finishes the climax, the atmosphere leftover is a mixture of darkness, pain, and dreariness (Paragraph 38, lines 1-3).

The Atmosphere is finally complete as the story reaches its dénouement and Desiree’s husband Armand, stumbles upon a letter from his mother to his father which reads “night and day, I thank the good God for having so arranged our lives that our dear Armand will never know that his mother, who adores him, belongs to the race that is cursed with the brand of slavery.” It is at this point in the last lines of the story, that the truth is revealed and that the blame Armand had placed on Desiree really belonged to him. This abrupt ending after this realization concludes the atmosphere to be that of a cold and tragic one (Paragraph 42, lines 1-4).

Throughout Chopin’s “Desiree’s Baby”, her excessive use of detail to create heavy imagery, creates an atmosphere that the reader cannot escape from. Desiree’s death and knowing that it could have been easily avoided because of her innocence provokes the heart of the reader and leaves them feeling if as though their “blood [had] turned like ice” (Paragraph 19, lines 13) 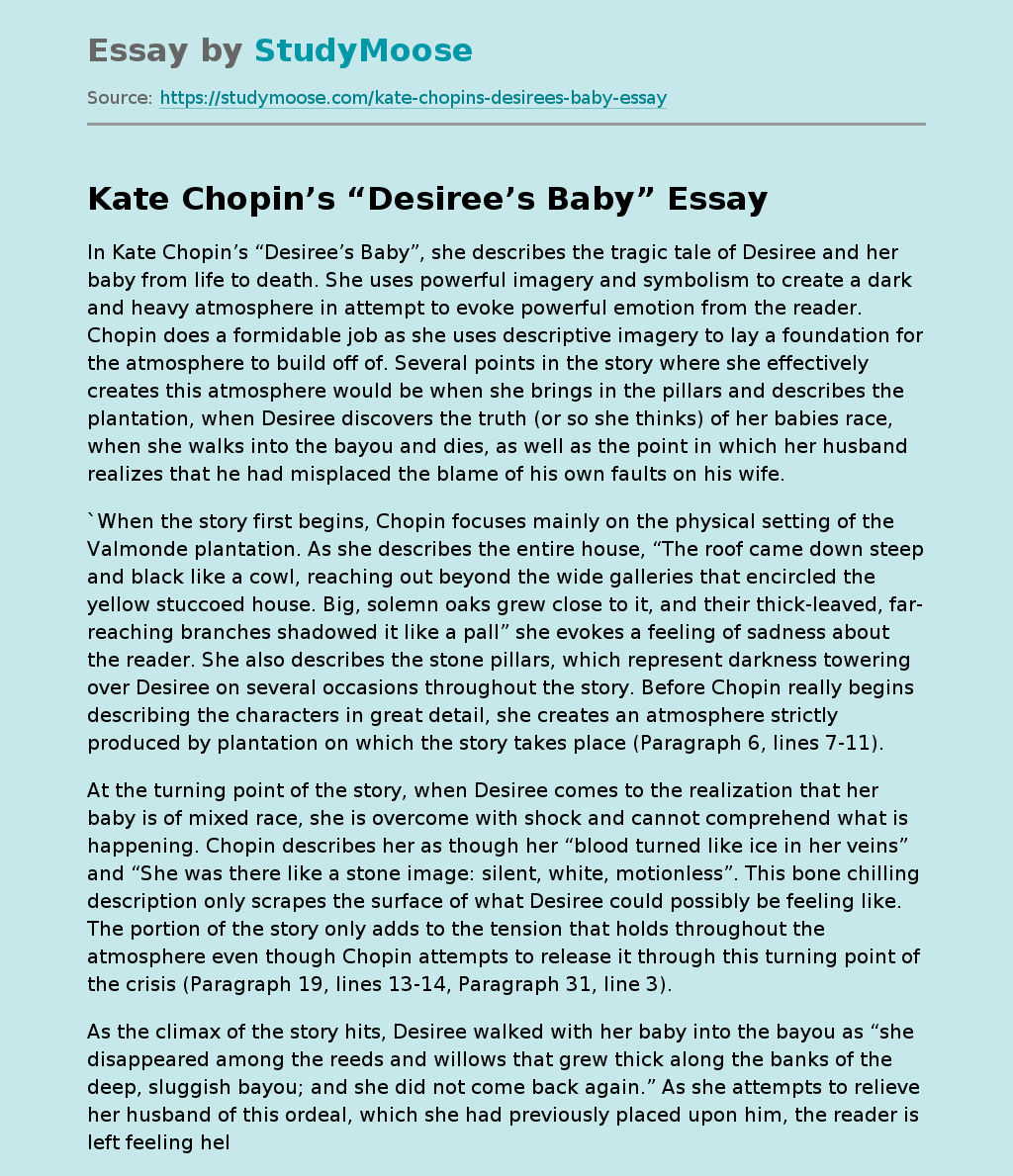