There used to be a time where white people thought having African American blood in your family was wrong. It was thought of as a shame to your family or a disgrace to the name. Kate Chopin tells a story about a wife and husband who have a new child. Desiree, a white orphan that was adopted by the Valmonde family, is enthralled about the arrival of her baby boy and her husband Armand, a strict slave owner is also excited to see his first born son.

However, the family begins to realize that something is mysteriously wrong with the newborn. They begin to notice that he is acquiring the traits of an African American and soon the couple start to narrow down the possibilities of the situation. In the story “Desiree’s Baby”, Kate Chopin uses symbolism and foreshadowing to portray that there is something eccentric about the baby and creates a mysterious plot that keeps the audience looking out for these clues.

With the use of many symbols in her story, Chopin gives the audience insight into the depths of her work. Examples of this symbolism include the stone pillar, La Blanche’s cabin, and the bonfire. The stone pillar that Desiree was found lying upon by Armand when he had first “fallen in love with her”(1) was used to show her desolate background. Armand uses this symbol as a sense of safety because he knows he will be able to use Desiree’s unknown decent to blame her for a future failure or to cover up his own mistakes.

At the end of the piece, we find out that the baby is mixed and Armand blames Desiree. Neither of them knows who really has African American in their blood but he automatically assumes that it is her because no one knows who her real parents are being that she is adopted.

”And the way he cries,” went on Desiree,” is deafening. Armand heard him the other day as far away as La Blanche’s cabin”(2), this is a strange line in the story and makes the reader question why Armand was in La Blanche’s cabin and what he was actually doing while he was there. This might suppose that Armand is having relations with his slaves. If this is true then it is possible that the quadroon boys are his children because he is “white’ and the mother is black. Oddly enough, the author does not make Desiree recognize Armand’s words and she never says anything to her husband about it which makes it difficult to recognize.

There are many foreshadowing examples that help the reader figure out what is going on in the work. One of the first foreshadowing elements is from Madame Volmonde, Desiree’s orphan mother, “This is not the baby!” she exclaimed, in startling tones.”(1) This hints the reader that something is odd about the child and it also informs them to look out for other information regarding the baby. “Madame Valmonde had never removed her eyes from the child. She lifted it and walked with it over to the window that was the lightest”(1), the author uses these sentences to show that the baby’s skin color was strange and the family had noticed it.

Although they had not quite figured out what was awkward, many things started to change starting when Desiree compared her baby to the quadroon boys. “She looked from her child to the boy who stood beside him, and back again; over and over.”(3) She then knew that her baby was mixed and Desiree immediately goes to Armand and asks him what it means.” It means,” he answered lightly, “that the child is not white; it means that you are not white”(3), this indicates that Armand believes she is mixed but she protest against him.

In the end of Kate Chopin’s work Desiree and the baby leave on foot. “She did not take the broad, beaten road which led to the far-off plantation of Volmonde. She walked across a deserted field, where the stubble bruised her tender feet, so delicately shod, and tore her thin gown to shreds”(5), indicates that her and the baby did not make it. With Desiree and the baby already gone, the reader finds the ending to be ironic when Armand finds out his mother is Black and this gives a sense of closure to end the piece. Chopin uses the elements of symbolism and foreshadowing to create a more mysterious plot that keeps her readers interested throughout the entirety of the story but also so they can go deeper into the meaning and theme of it as a whole. 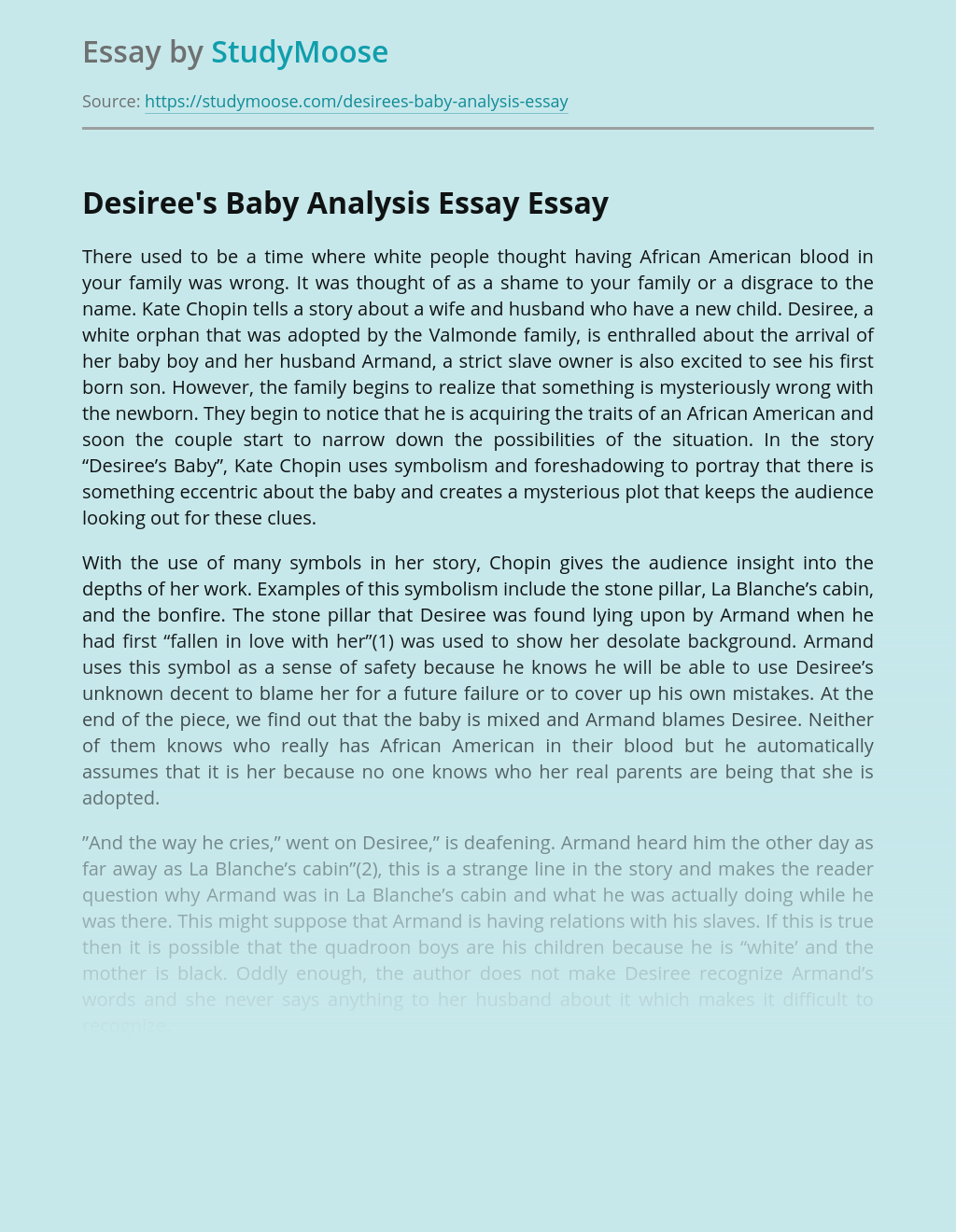