Kate Chopin’s story is set in Louisiana in the early 1900s and in it she portrays the act of love and infidelity. There are two people in a marriage and it is important for each party to feel loved, special, and to receive their desired fulfillments. Chopin uses this story to depict the passionate urges that a person can be overcome with if they are missing it in their own relationship. In the short story “The Storm,” she uses the literary elements symbolism, point of view, and setting to reveal her perspective on the theme of marriage and fulfillment.

Don't use plagiarized sources.
Get Your Custom Essay on “The storm” kate chopin Just from $13,9/Page

Kate Chopin uses the approaching storm as a symbol of bringing the main characters back together. The two main characters, whom are former lovers are Calixta and Alcee. Alcee was coming upon Calixta’s house during the time of the storm and had to take shelter in her home while it passed. The storm is the most significant symbol in the story because it is portrayed as the reason for bringing Alcee and Calixta back together.

Alcee and Calixta had not seen each other “very often since her marriage, and never alone” (Chopin 122) which made this approaching storm very convenient for the two because her husband and son were held up at the store and Alcee’s family was out of town.

Also, in the story, Chopin describes the storm as “crashing torrents” (Chopin 123) which could symbolize the passion the two have for one another. The use of colors is also a sign of symbolism for both the lack of passion that is in Calixta’s marriage and also the passion that she has for Alcee. This does not mean Bibinôt doesn’t love or care about her because it is mentioned that he “purchased a can of shrimps, of which Calixta was very fond of” (Chopin 121) which meant he had his wife on his mind. The color white is the most significant color used throughout the story. White symbolizes innocence and purity and in the story it is used to describe Calixta’s breast and neck, and also the “white, monumental bed” (Chopin 122) that she shares with her husband which could indicate that their marriage is lacking the love and passion. Chopin also describes Calixta’s lips “as red and moist as pomegranate seed” (Chopin 123) and the color red symbolizes passion and also danger. The story consists of five different sections and each section is being told from the point of view of different character.

Kate Chopin’s use of this method gives the readers the opportunity to understand what is going on through the eyes of each character. Bobinôt and Bibi were caught up at the store during the storm’s passing which left Calixta at home alone with Alcee coincidentally showing up. The story being told in third person omniscient lets the readers know that the narrator understands what is going on in the minds of the character. For example, early in the story the narrator points out that “she remembered; for in Assumption he had kissed her and kissed and kissed her until his senses would well-nigh fail” (123), which indicated that the narrator knows their thoughts and feelings; this takes place a lot throughout the story. Finally, the setting is a significant literary element because each character’s story takes place in different locations. While the storm was approaching, Bobinôt and Bibi were at “Friedheimer’s store and decided to remain there till the storm passed” (121) and they spent the majority of the story in that location.

Next, there is Calixta and Bobinot’s marital home and is the most significant setting in the story because that is where the climax of the story takes place. While Calixta’s husband and son are away she invites Alcee into their home where the two proceed to have long awaited relations with one another. Finally, there is the least significant – but nonetheless, significant – town Alcee’s wife and kids are away at. In the end Chopin makes it seem that infidelity can sometimes be a good thing; after the affair it made both Calixta and Alcee better people as a consequence.

The message of the story is not that adultery is only okay if it is necessary it is rather that marriage is between two people. To have a good, healthy relationship each person should be fulfilling of each other’s wants and needs. Through her use of symbolism, point of view, and setting, Chopin gives her readers the understanding of what marriage was like and how a woman could express her womanly fulfillments in the nineteenth century.

“The storm” kate chopin. (2016, May 19). Retrieved from https://studymoose.com/kate-chopin-the-storm-analysis-essay 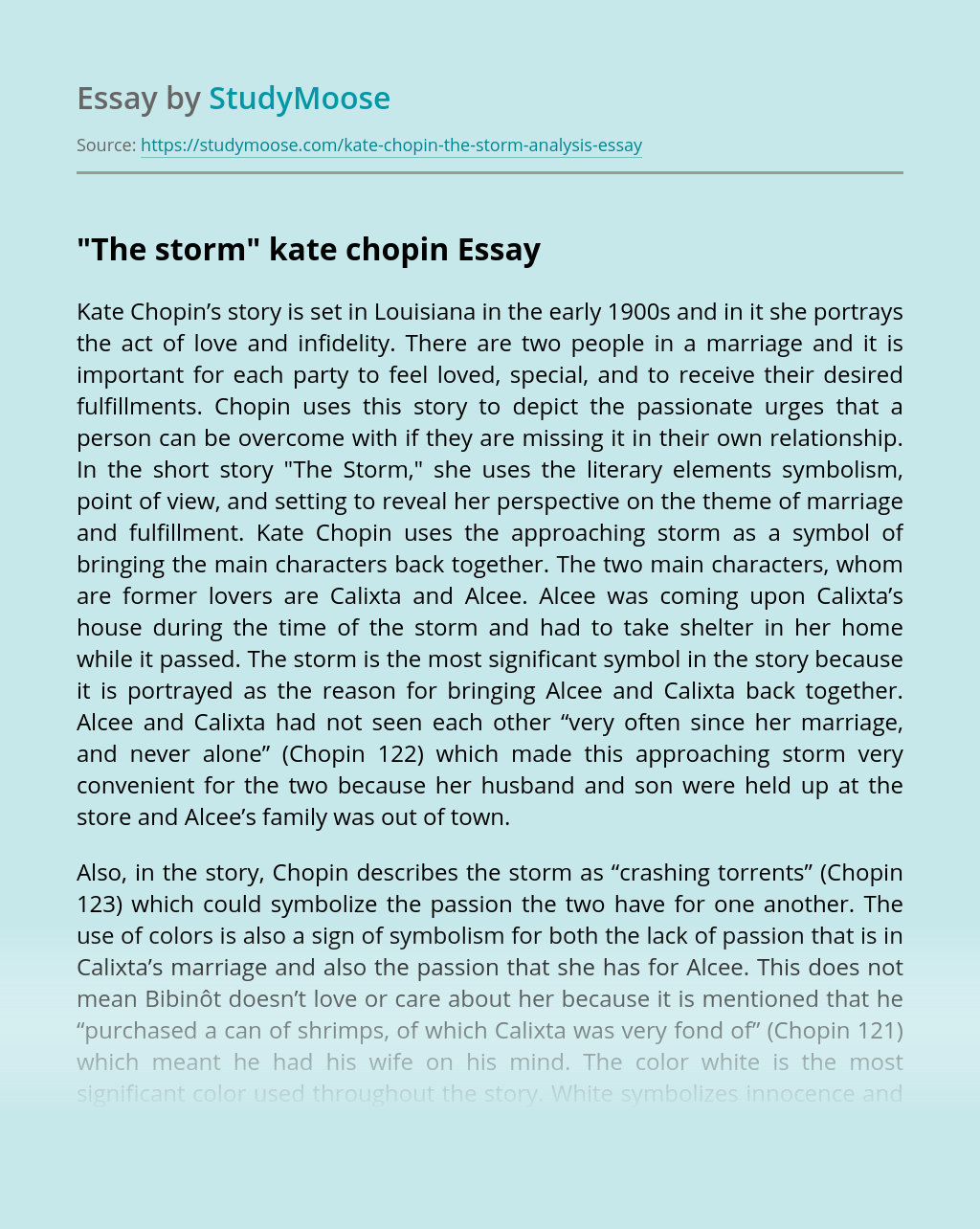 The Jazz Age in the Great Gatsby

The representation of the Jazz Age in the novel The Great Gatsby is shown through the characters, their lifestyles, and society as a whole. Each of these clearly reflects the customs and course of this time period. The protagonist, Jay Gatsby, is the prime example of the Jazz Age image. Another example is the change... VIEW ESSAY

View sample
I Am a Dancer

I. Abstract Postmodern graphic design is one of the most prominently cited trends in the fields of advertisement and design from 1960s to 1990s. However, most critiques from modernist groups initially denied the existence of this trend. Through the different movements established during these years, such as Punk movement, pop culture movement and Dadaist arts,... VIEW ESSAY