Effects of Unresolved Conflict on Marital Satisfaction and Longevity

Effects of Unresolved Conflict on Marital Satisfaction and Longevity

Over the past decade, there has been tremendous interest in the processes in marriage, with a corresponding burgeoning of longitudinal studies on marriage. (Bradbury, 1998). Karney and Bradbury, in their 1995 review of the longitudinal research on marriage, included 115 studies consisting of 68 independent samples and more than 45,000 marriages. These studies give an in-depth understanding of when marital dissatisfaction sets in, how problems develop, and what leads to the consequence of marital dissolution.

Don't use plagiarized sources. Get your custom essay on
“ Effects of Unresolved Conflict on Marital Satisfaction and Longevity ”
Get custom paper
NEW! smart matching with writer

, 1998). Kurdek found that marital satisfaction for husbands and wives decreased over the first 6 years of marriage, with the steepest drop occurring in the first 2 years. Lindahl et al. (1998), in their 9 year study of the development of marriage, found a similar rend.

Marital adjustment significantly declined during the first couple of years and then leveled out by approximately the third to fourth years.

Several factors seem to account for this decline: commitment, conflict, and communication. In particular, husbands and wives low faith in the marriage at year 1 predicted both spouses long- term low marital satisfaction. Spouses with low faith at the start of the marriage may report low marital satisfaction 6 years later because they lack the motivation or the skill to engage in the kinds of relationship maintenance behaviors that foster high levels of satisfaction (e.g., being accommodating during conflict, managing jealousy, and being willing to sacrifice).

Many researchers attribute the decline in marital satisfaction in the early years to the couple’s transition to parenthood, and typically this factor has been a focus of their studies. However, this factor alone does not seem to account for the lower satisfaction, because many couples without children also experience a similar decline.

The occurrence of conflict appears as another critical variable in the course of marital satisfaction. Conflict is inevitable in any intimate relationship. How it affects satisfaction depends on the extent to which couples engage in conflict or withdraw from it. There are usually short-term negative effects to engaging in conflict, but there are long-term positive effects. If conflict is not openly addressed but is avoided, there are issues that can be left unresolved and further fuel feeling of resentment and anger.

In their longitudinal study of 33 couples, Noller and Feeney (1998) found that, during the first 2 years of marriage, less happy couples made concerted attempt to improve their relationships during the first yea of marriage, but gave up these efforts by the time of the third assessment in the study. Noller and Feeney suggested that these new behaviors to improve the relationship were not being reinforced by the partner and hence did not become an integral part of the behavior repertoire. In particular, destructive conflict behaviors such as coercion, manipulation, and avoidance were likely to have negative effects on relationships.

Other researchers have also discovered that how couples behave prior to marriage indeed affects their satisfaction and stability during marriage. According to Lindhl et al. (1998), a variety of communication and conflict-related variables before marriage can predict who will stay married and who will divorce. In particular, they found that how couples communicate and regulate negative effect (anger, frustration, mistrust, and resentment) during conflict was significantly related to marital stability. The strategies that these couples used to handle conflict tended to improve over time. For example, the levels of withdrawal and verbal aggression decreased.

In their longitudinal studies of marital processes, Rusbult, Bissonnette, Arriage, and Cox (1998) found commitment to a relationship to be strongly predictive of feelings of satisfaction. Their study followed 123 married couples over the course of three and one half years.

They concluded that commitment is a central relationship-specific motive that promotes a wide range of prorelationship behaviors and enhances dyadic adjustment. Strong commitment to a marriage promotes greater willingness to accommodate. Accommodation is defined as behavior in which individuals forgo self-interested behavior for the good of a relationship, place greater value on prorelationship behavior, and recognize the interdependence of the partners. It is one of several specific mechanisms through which committed individuals sustain their relationships.

As incompatibilities and problems surface during the marriage, partners either accept each other’s differences or the problem that are not resolved persist until the relationship dissolves.

The perpetual problems model views couples behaving similarly during courtship as they do after they are married, and consequently the problems that arise during courtship often persist into marriage. Thus, problems that persist from courtship through marriage erode partner’s feelings toward one another. In contrast to the disillusionment model, the perpetual problems model proposes that courting couples are aware of each other’s strength and flaw as they enter marriage.

Alternative models of relationship deterioration emphasize that particular personalities of the partners are root cause of marital happiness and distress. In these models, spouses view their partners, but not their own, personality as cause for marital disaffection. In particular, the partners with the personality trait of negative affectivity are more likely to be unhappy in their marriages. Negative affectivity reflects a tendency to be anxious and emotionally labile, to report distress or discomfort, to be introspective, and to dwell on one’s own and other people’s shortcomings.

Husbands and wives high in negative affectivity tend to make more negative attributions for their partner’s behavior. In the Karney et al. study, there was a relation between husbands’ level of negative affectivity and their own and their wave’s marital satisfaction. On the positive side, a personality quality that is resulted to marital satisfaction is expressiveness, which is a communal orientation that includes being kind, gentle, aware of other’s feeling, warm, and emotional, and which might reduce conflict in relationships because one can respond constructively when one’s partners behaves poorly.

It is apparent that many of these disaffected spouses suffered in silence. They were reluctant to admit marital problems to friends and family. because the majority of respondents had experienced marital doubts during the first year of the marriage, it may have been too embarrassing to these spouses to admit dissatisfaction so early in their marriages. In addition, there is a taboo in Western culture that discourages spouses from talking about their marriages. This so-called intermarital taboo states that married sposes cannot talk openly to each other about their marriages. Unfortunately, because of this taboo, couples do not have the chance to share with one another the stresses of married life and the possible ways to cope effectively with them.

On the other hand, resolving conflict is part of family life. Husbands and wives disagree with each other, parents and children do not always see eye to eye and sibling relationships frequently involve rivalry. The characteristic ways in which families resolve conflict are an important part of the practicing family and influence child development.

Children are sensitive to anger and conflict even when adults other than their parents express it. Unresolved marital conflict is more predictive of child functioning than marital satisfaction alone; suggesting that the specific ways that husbands and wives resolve conflict may be related to child social and emotional functioning. Not at all marital conflict is detrimental to children, however. Exposure to low levels of marital conflict may provide one avenue for children to learn how to solve interpersonal problems effectively.

Particular patterns of marital interaction have been found to be related to couples distress, the likelihood of divorce, and child behavior problems. Couples whose conflict is typified by mutually hostile exchanges, or one partner making demands while the other withdraws from further discussion, are less satisfied in their marriages and are at greater risk for divorce have proposed that children raised in families with high levels of marital conflict may become fearful that their parents are on the road to divorce and dissolution of important family relationships.

Consequently, the child is motivated to reduce marital conflict by distracting the parent’s subsystem and decrease the conflict expressed in the marital subsystem. In this regard, the battling husband and wife are enlisted as cooperative mother and father, and the result is a temporary reduction in marital negative affect. Although there may be increased negative affect between parent and child, the system has retained its order and the subsystem of parent –child regulation temporarily overrides the marital subsystem and preserves the family as a whole.

Meanwhile, interactions in one portion of the family will more than likely influence other interactions in the family. The cost to children can be quite high when there is disruption in the marital relationships, as it effects the parents’ ability to engage in mutually pleasing interactions with their children. Marital difficulties are proposed to lead to inconsistent parenting and discipline, which in turn create situations conducive to child behavior problems.

Externalizing problems in elementary-school-age boys have been found to be best predicted by a model of family stress (including marital satisfaction and divorce) mediated by negative maternal control and disciplinary interactions. In some cases, there is a cascading effect, where specific aspects of marital conflict spill over into parent-child interactions. When husbands withdrew in angry conflicts with their wives, the wives tended to be critical and intrusive with their children, which in turn were related to internalizing problems.

Love, money, support, security, companionship, and validation are types of rewards desired in a close relationship. The cost of staying in a relationship may involve one’s time, energy, and various other efforts. During thee breakdown of a relationship, there is a drastic shift in perceived rewards or costs.

This shift may be to the individual’s view of fewer rewards, such as less time together and less money, as examples, or what may have been perceived as a reward earlier in the marriages is no longer rewarding. For example, the continual care and attention given by a partner may have been viewed as rewarding in the beginning of the relationship, but later is viewed as smothering or manipulative.

In coping with their marital dissatisfaction, respondents were primarily keeping silent and denying the gravity of the marital situations. Seeking support and help from their friends, family, or a professional helper rarely occurred.

Marriage: The role of personality and compatibility in romantic relationships.

during the early years of marriage. In T. N. Bradbury(ed.), The developmental

Effects of Unresolved Conflict on Marital Satisfaction and Longevity. (2017, Apr 21). Retrieved from https://studymoose.com/effects-of-unresolved-conflict-on-marital-satisfaction-and-longevity-essay 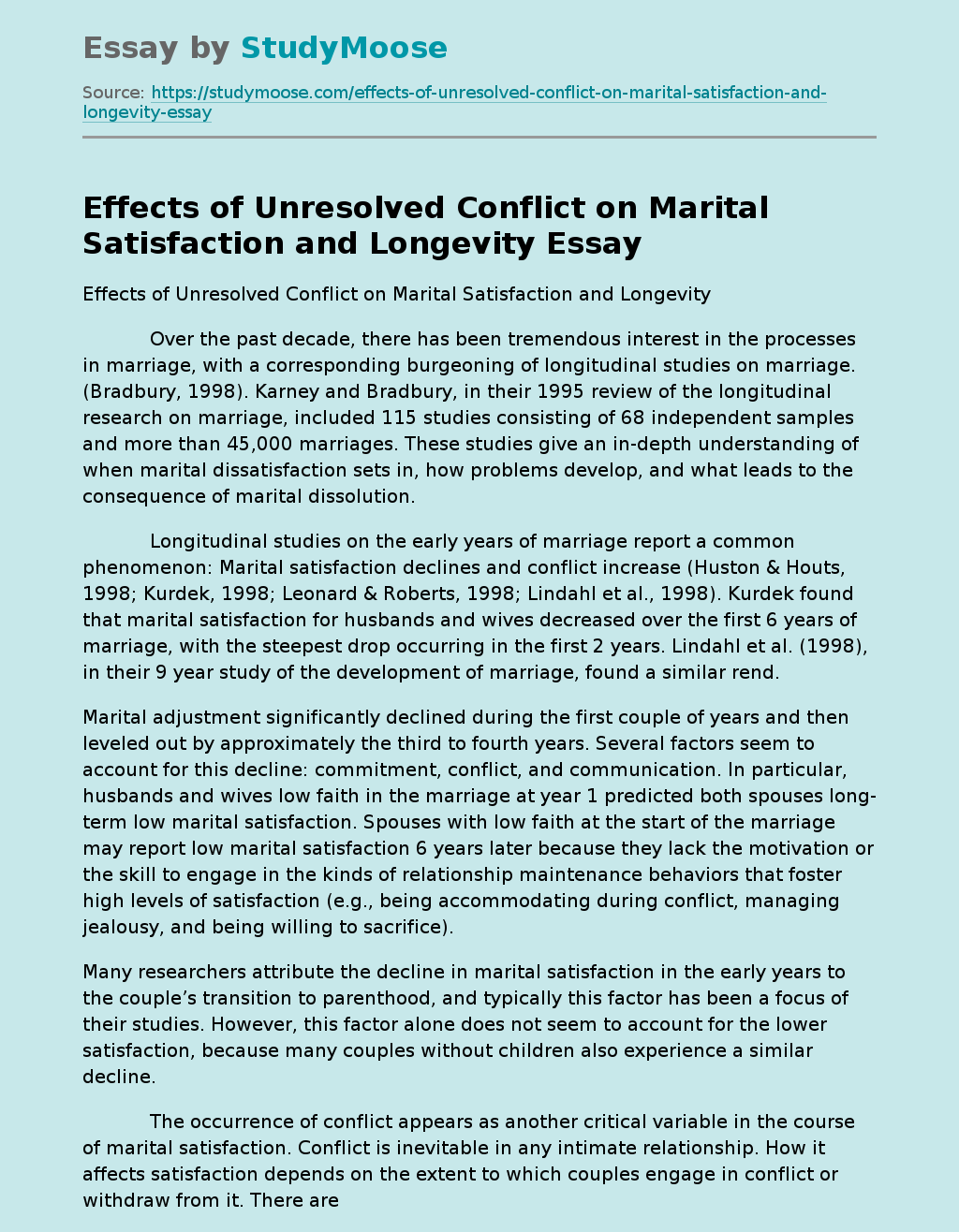