The Mortal Immortal is a romantic story. It is about a love affair but not a love affair that we would expect. The Mortal Immortal shows the difficulty of love. We see the harsh reality of love and what it can do to our character and at what lengths we will go to betray or be happy with somebody. Bertha is the cruel selfish wife of Winzy who is only in love with her and wishes to be not in love.

Don't use plagiarized sources. Get your custom essay on
“ The Mortal Immortal Novel Reading and Analysis ”
Get custom paper
NEW! smart matching with writer

She represents the natural behavior of natural people. Winzy is a man that is very much desperate to not feel the hurt of love towards Bertha.

The story will show ideas about how horrible love can be and how normal people can go completely insane over love alone. Mary Shelley will show us the places our minds go when we are in love through Bertha and Winzy. Bertha is selfish. She was an orphan that longed for protection in her life, “a malignant fever carried off both her father and mother” which can be extremely damaging to a young child.

She had always been insecure with neither of her parents around.

Although Bertha was not raised having money from her parents, she was adopted and spoiled by an old lady neighboring her, “the old lady of the near castle, rich, childless, and solitary, declared her intention to adopt her. Henceforth Bertha was clad in silk—inhibited a marble palace—and was looked on as being highly favored in fortune”, she is very much greedy with money after being clothed in silk and having many fortunes.

Bertha would not be greedy with money if she never had money in her life.

After being spoiled by the old lady, her greed got the best of her and she thought she deserved no less than the richest man even though Winzy loved her so very dearly. She marries Winzy at age fifteen when she decides to leave the castle. She left because she felt as though she was being controlled and Winzy was her only escape. She criticizes his poverty to hopefully push him to make money so she can marry him “I was then very young-very poor-and very much in love”. Winzy was happy being poor. He did not need money to make him happy.

Winzy has a way to make money but does not want to work for his old boss, whom is a close friend of Winzy, Cornelius, because Cornelius’ old assistant dies. Winzy believes the cause of death was from Satan. Winzy does not want to be taken by Satan. Bertha does not care if Satan kills Winzy or not. Bertha says, “’You pretend to love, and you fear to face the Devil for my sake! ’” telling that she only wants his money and she believes he should risk his immortal soul for her. These are only a few ways that her cruelty is portrayed in The Mortal Immortal.

She is basically a bitch to Winzy. Bertha belittles Winzy. When Bertha is wrong, she will make Winzy feel guilty for her own wrong doings. She is hypocritical. Bertha truly enjoys her cruelty towards Winzy, “she complains bitterly, and almost reproached me for being poor”. She almost pretends like it is a game. While Winzy is lusting after Bertha, she will leave him for Albert and break his heart. She uses Albert to make Winzy jealous when she does not get her way, “Jealousy, with all its venom, and all its misery, entered my breast.

Now I shed a torrent of tears, to think that I should never call her mine; and, anon, I imprecated a thousand curses on her inconstancy”. Not only has Bertha hurt Winzy, his love leaves him for somebody else. This is a representation of things that normal people do when in a relationship. Winzy shows us how our minds work when we are in love or hurt. Winzy believes Cornelius has a potion that will make him not in love. As Winzy drinks the potion from Cornelius, he thinks about killing Albert in front of Bertha and then killing Bertha, Never! Half formed itself on my lips.

False girl! —False and cruel! Never more would she smile on me as that evening she smiled on Albert. Worthless, detested woman! I would not remain unrevenged—she should see Albert expires at her feet—she should die beneath my vengeance. She had smiled in disdain and triumph—she knew my wretchedness and her power. Yet what power had she? —the power of exciting my hate—my utter scorn—my—oh, all but indeference! Could I attain that—could I reguard her with careless eyes, transferingmy rejected love to one farrier and more true, that were indeed a victory!

Our minds go into these directions as one would think, “if only I had a gun right now…” Winzy uses this placebo effect to free his mind of homicidal thoughts. When we are desperate to stop the pain, we will almost go to any extent to relieve the pain by believing silly stories or tales. He is desperate to get away from this crazy love as we see in several love relationships. He will believe that the drug will relieve him of all the pain. We see later on that Bertha treated Winzy badly because he was basically a whimp.

After Winzy drinks the potion, he feels strong and not in love, “I was cured of love, and lifted above all human fears”. Bertha sees this side of Winzy and likes it. She falls in love with his new style and decides she likes the strong and manly Winzy. Bertha and Winzy are in love for five years, “I no longer loved—oh! No, I adored—worshiped—idolized her! ”. We do not know what Bertha was like during these five years but we do know that Winzy was a more secure man. We also know that Bertha leaves the castle to be with Winzy because she was being controlled in the castle by the old lady that adopted her.

She wanted a stronger man in her life and that is what Winzy was after he drank the potions and gained a backbone. After the five years of being happily in love, Winzy is now twenty and Cornelius tells him that the potion is a cure for everything immortality, “Five years afterwards, I was suddenly summoned to the bedside of the dying Cornelius… then, as now, my thirsting lips expected to taste the immortal elixir… I was to live forever! ”. Winzy realizes that the potion he drank five years prior to Cornelius dying was not to make him not love, it was to make him immortal.

He will now live forever. The only sad thing about living forever, is that he will always have the hurt and betrayal in his heart from Bertha. His soul will get old even if his body does not age. He will always be around with an old, withered, broken soul. Three hundred years later, “This was a memorable anniversary for me; on it I complete my three hundred and twenty-third year! ” we see that the drug was not a placebo. “Bertha was fifty—I twenty years of age” Bertha is jealous of Winzy’s immortality and she becomes envious of him at the age of fifty.

To make herself younger she pleads for Winzy’s secret. She becomes more caring about her beauty and wears short dresses and long hair to make herself look and feel younger like Winzy. She then wishes him to instantly turn old and die. We see how death is wished for when in a difficult love affair. Jealousy makes us do absurd things and wish for horrible things for the people one may be jealous of. This is a story about homicide, dreams, envy, game playing, and the psychology of relationships. The ideas about the afterlife are immature.

When one thinks of immortality, he or she thinks of how wonderful it must be to live forever. To never die. What about the afterlife? What about old torn souls? Immortality may have caused Bertha to be jealous and envious of Winzy, but she gets to die and have something like heaven to look forward to. Winzy will never get to see the afterlife. He will always have old feelings and thoughts that he wants to get rid of. We are asked the question, “if we are fearful for our death, does that play with how we love? ” There is a heaven and we hope it is different from the mortal life which is flawed. 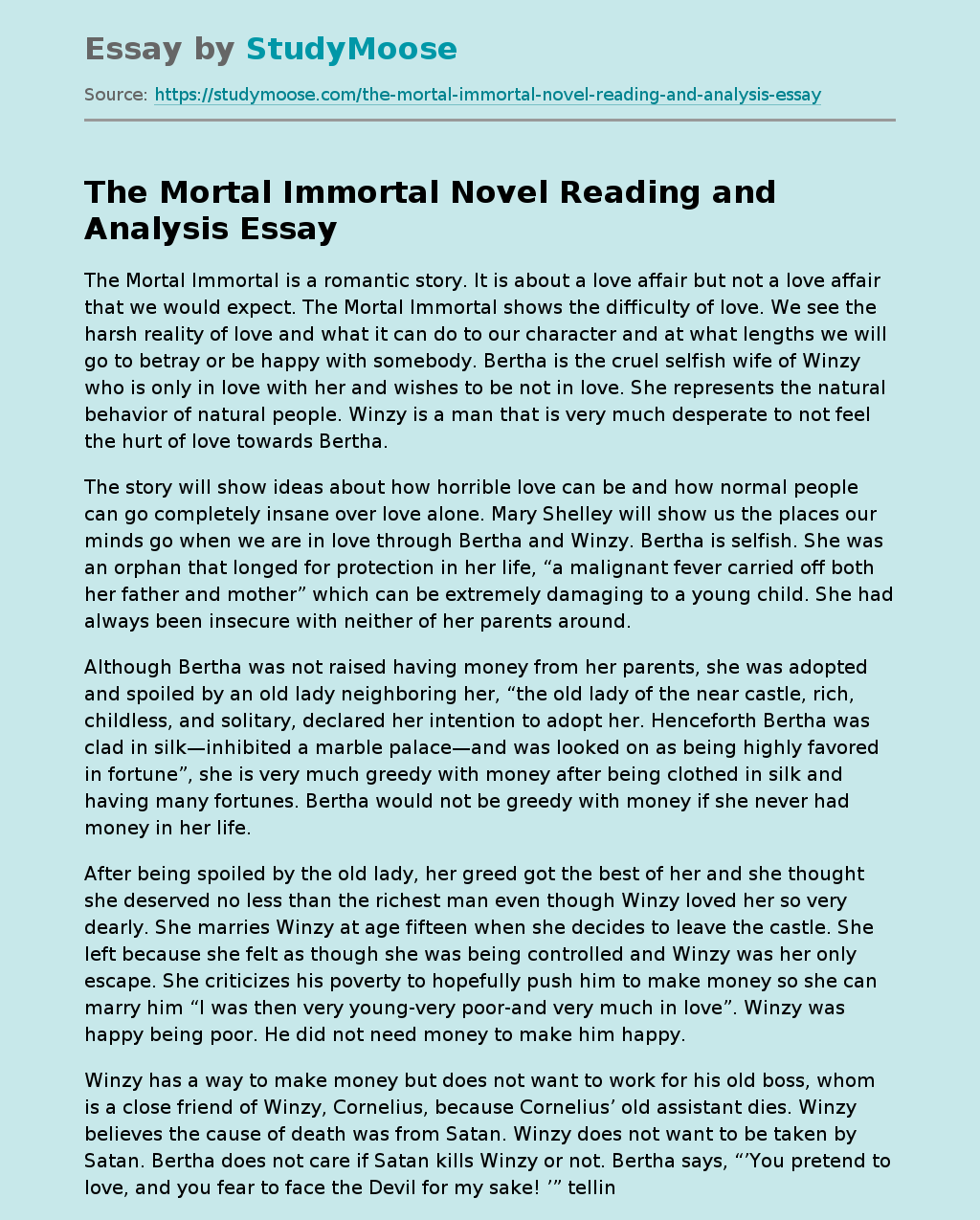