‘Cupid and Psyche’ and ‘Beauty and the Beast’ Comparison

Jean Cocteau, a French poet and filmmaker, is said to be influenced by Cupid and Psyche when he does the film Beauty and the Beast in 1946. Cocteau is surrealist who loves to produce incongruous imagery by means of unnatural combinations in his films. Adding to that, he is fond of myth and fairy tales. The influence is made clear by the several similarities between the Beauty and the Beast and the Cupid and Psyche, a story taken from the The Golden Ass novel by Luscius Apuleius.

Turn in your highest-quality paper
Get a qualified writer to help you with
“ ‘Cupid and Psyche’ and ‘Beauty and the Beast’ Comparison ”
Get high-quality paper
NEW! AI matching with writer

One similarity is that both Belle and Psyche are beautiful women who have scornful and envious sisters.

Belle is kind girl whose sisters, Adelaide and Felicie, are always jealous of her for many reasons. Similarly, Psyche’s sisters hate her. Perhaps it is because Psyche is much more beautiful than them and everyone else, even Venus. Both stories are also similar in that the two women believe that they are marrying monsters. Belle’s Beast is a horrible-looking creature.

Her fear though is eventually replaced with love of him. On the other hand, since Psyche’s suitor does not want to show himself to her, she believes that he is a monster.

The resemblance goes further with the plot that tells a love affair that is almost destroyed by the two women’s scheming sisters. Belle’s sisters steal her golden key and plan, together with Ludovic and Avenant, to eliminate Beast. Likewise, Psyche’s sisters urge her to slay Cupid with a knife. However, their evil plans fail because, to show another similarity, both stories end happily.

As Avenant dies after being shot with an arrow by Diana when he breaks in the castle, he is transformed into a beast while Beast, who is almost dying with grief, changes into Ardent, a handsome prince.

Belle and Ardent get married, take her father with them and have her sisters hold her gown. Likewise, Psyche, after accomplishing several tasks and drinking an immortality potion from Jupiter, is finally reunited with Cupid. They get married and have a daughter. It is also noticeable that both stories are influenced by magical and supernatural intervention. Beauty and the Beast has the mirror, the Diana statue and the transformation of the beast and Avenant ; Cupid and Psyche has the clout of Venus’ power all throughout the story.

However similar the two stories are, they present many contrasting ideas. One is that Psyche does not have a male antagonist while Belle has a brother, Ludovic, and a fervent suitor, Avenant. The causes of their misfortune (but turns out to be a good fortune) are also different. Belle’s change of fate starts when they are indebted to a loan shark followed by the agreement of her father with the beast that sends her to stay in the castle in the forest. On the other hand, Psyche’s luck is influenced by her unparalleled beauty that causes the goddess Venus to envy and hate her.

Another variation is that Beast really looks like a beast, a monster in all physical aspects, matched with his howling and growling, while Cupid is a beautiful and comely male god. The idea of him as a monster, in addition to the prodding of Psyche’s sisters, comes from the prophecy of the Oracle that Psyche is destined to marry a monster. The difference also occurs when Belle leaves Beast in the castle and gone for a long time to attend to her sick father. Contrastingly, it is Cupid who leaves Psyche after she heeds her sister and she sees his appearance.

Although justice from the scheming sisters is attained, the way it is served in both stories differs. Psyche’s sisters fall to their death as they climb the mountain to offer themselves to a god while Belle’s sisters are reduced to lower positions in Belle and Beast’s house. Beauty and the Beast and Cupid and Psyche continue to mesmerize audience and readers because of the magical charm and love spell they cast to everyone. Their simple plot stirs up the people’s imagination, creating a fantastic adventure brought by the contrasting nature of the mundane and unexciting world of the woman and the fantastic magical realm of her suitor/lover.

‘Cupid and Psyche’ and ‘Beauty and the Beast’ Comparison. (2016, Aug 18). Retrieved from https://studymoose.com/cupid-and-psyche-and-beauty-and-the-beast-comparison-essay 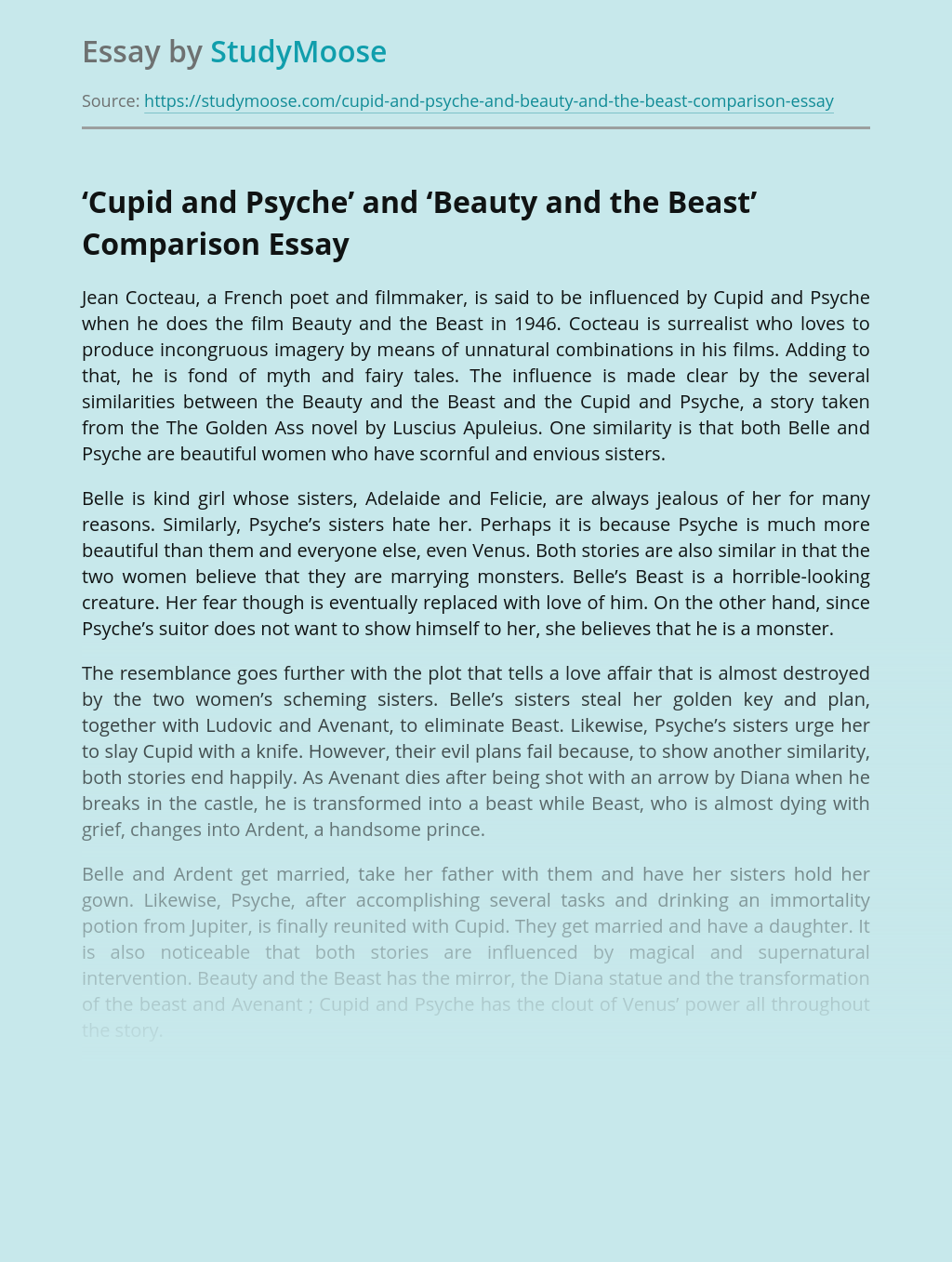 Turn in your highest-quality paper
Get a qualified writer to help you with
“ ‘Cupid and Psyche’ and ‘Beauty and the Beast’ Comparison ”
Get high-quality paper
Helping students since 2015
Stay Safe, Stay Original