Freudian Analysis of “Beauty and the Beast”

In “Beauty and the Beast”, Beauty, the dreamer, successfully travels through the phallic stage and the Oedipus complex into the latency and genital stages. She is at first attached to her father, and wants to protect him. She mentions that she is willing to even die for him so that he can live a happy life. Beauty eventually realizes that she is actually in love with the beast (Brett, n.p).

Beauty starts out in the phallic stage of development. She is starting to recognize the difference between male and female, however, she still views males as beastly, and chose her father over them.

Don't use plagiarized sources. Get your custom essay on
“ Freudian Analysis of “Beauty and the Beast” ”
Get custom paper
NEW! smart matching with writer

When the beast comes into the story, Beauty offers to sacrifice her life for her father. This shows the Oedipus complex of Beauty. She still is competing with other people for her dad. Beauty’s father depicts phallic symbolism of a man through the efforts that he undertakes to especially by portraying that he is a self-made man, that is wealthy and makes use of common sense (Brett, n.

p). Beauty’s father is portrayed as a self-made, wealthy man with common sense. Despite his bad luck and loss of his wealth, he still manages to bring up his six children and provide them with quite a comfortable life, talking the role of the man of the house and ensuring that his family is provided for despite all the circumstances.

Beauty stays in the Oedipus complex when she is brought into the castle. She still views other males as gross (the beast) and puts her father first.

When the beast asks to marry her, she quickly rejects him. However, the Beast continues to see her regularly, day after day (Brett, n.p). The beast offers for Beauty to see her father, except that he would die if this happened. This is when Beauty starts entering the latency stage.

When Beauty visits her father and her sisters, she starts to realize how much she is longing to see the Beast. She starts to get annoyed by her sisters, who are jealous of how beautiful she is. However, she spends most of her time with the same sex, a sure sign of the latency stage. Beauty is seen to be very close to her father in a way and has what is referred to as an “electra complex” which is an “oedipal complex”, a female version (Brett, n.p). She sees her father as one that never does anything wrong and is always a good person. There is no fight between her and her mother over her dad hence she becomes quite closer to him although she undergoes a very quick transition (Brett, n.p).

When Beauty sees Beast at the end of the story, she is scared that the Beast will kill himself since she did not keep her promise. The Beast is upset about this, but still says how happy he is to see her and that he will die satisfied. This is where the genital stage begins. Beauty explains her love for him and that she cannot live without him. She is basically starting to go through puberty, a sure sign of the genital stage (Brett, n.p).

As Beauty passes through the stages in her life, she has the desire to read but also has more desires that she wants to satisfy and is not sure of the place or the person to find it from but this change when she starts developing interest and liking for the Beast. On the other hand, the Beast is seen as unconsciously searching for some form of help as well as someone that can be able to love him for who he is. As the picture and symbol of morality, Beauty finally develops a super-ego that is great (Brett, n.p).

Beauty passes through all of the stages of psychosexual development without much of a problem. She overcomes a little bit of trouble with the Oedipus complex, but seems to finally get to the genital stage when the story is over (Brett, n.p). The end of the story represents the rest of the genital stage where Beauty recognizes her love for the opposite sex. She has to renounce her affection and care for her father for a suitor that she would be spending the rest of her life with (Brett, n.p). In this part, the Beast, despite the nature of that he has, undergoes a lot of struggle in trying to contain and control the urges that he has just to have someone to love him. The refinement of the Beast in to something that is more human is not a mere facade, but it is part of who he really is and also forms part of the reason why he is able to succeed in controlling his lust (Brett, n.p).

The Beast is symbol of dual nature of the males whereby the outside portrays the rough and manipulative males while the inside is full of love and care, similar to Beauty’s father. He is strong on the outside and strict with his daughters although in the inside he is compassionate and loves them hence takes care of them despite losing his wealth (Brett, n.p). From the overall story, male presence is dominant and the Beauty has to make a choice between men that she is emotionally attached to in her life. Her father has been part of life for a long time but she then finds love and intimacy in the Beast, of which she wants to experience in her life as she also loves the Beast.

Freudian Analysis of “Beauty and the Beast”. (2015, Nov 10). Retrieved from http://studymoose.com/freudian-analysis-of-beauty-and-the-beast-essay 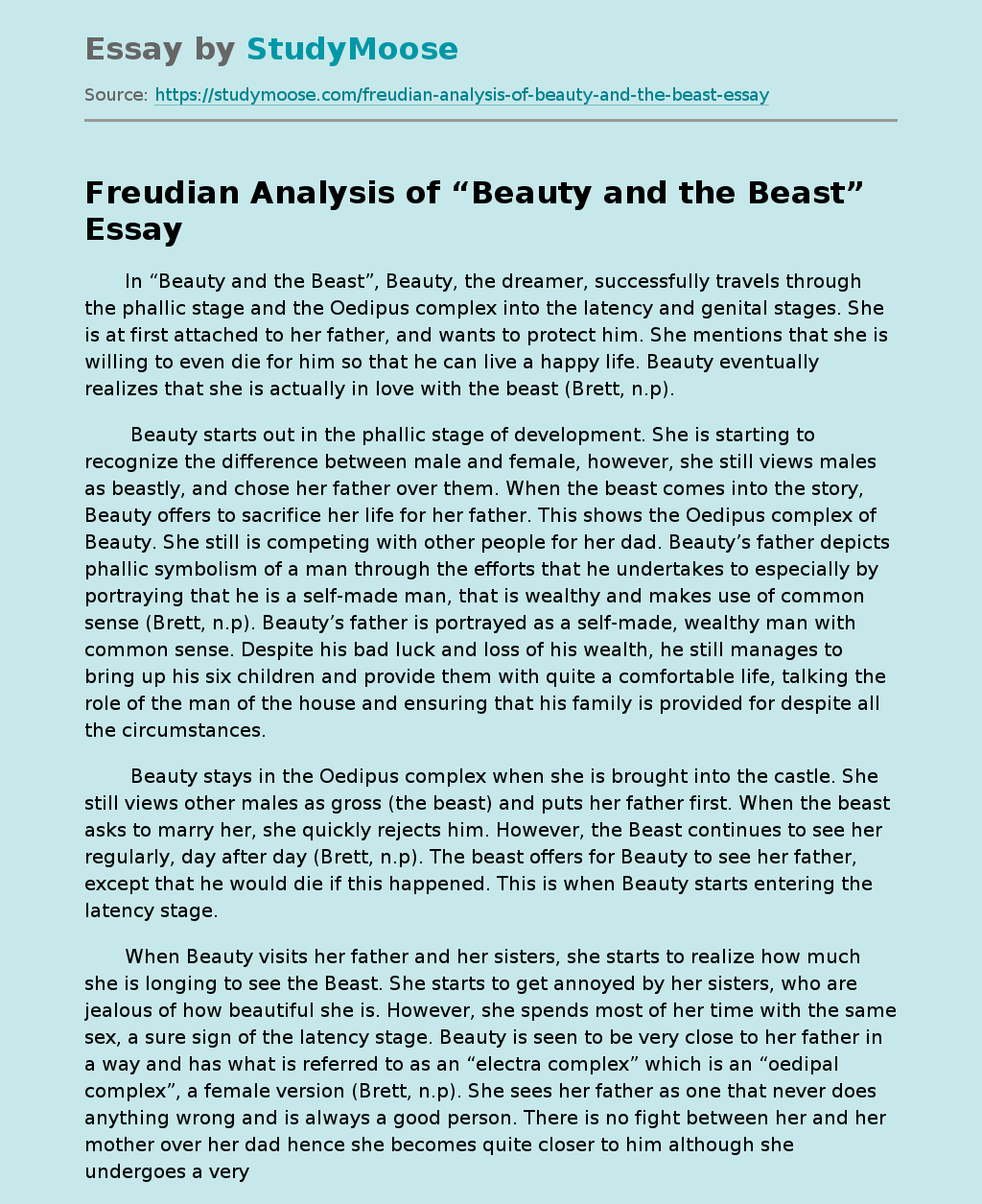