Question: Roderick Usher is a complicated character who seems to be both physically and mentally unstable; on top of that he is also terrified. What is he so afraid of that causes him to act this way towards Madeline and the others? It is because he had committed incest, hence a sense of guilt for his actions? Or is it because he is the last in line of the usher family? Use Freudian psychoanalysis to examine the character of Roderick Usher.

Don't use plagiarized sources. Get your custom essay on
“ Analysis of Roderick Usher’s character in the story The Fall of the house of Usher ”
Get custom paper
NEW! smart matching with writer

To study an individual character by Freud’s psychoanalytical method one must first look into how a mind is divided. According to Freud psychoanalysis there are 3 layers in one’s mind: innermost layer ID (our subconscious state of mind), then super ego (dealing with human conscience of right and wrong) and outermost layer of the human ego (our conscious self). Freud states that an individual can only control two-third of their mind that is the remaining one-third – the ID cannot be controlled nor can one be even aware of its state.

ID, which is our ‘actual self’, the honest complicated inner-being which decides our actions, even the ones we are incapable of explaining is something beyond one’s reach. One does not have any idea of what is going on that part of their mind; all the repressed feelings are also stored in this section.

Freud also mentioned that these repressed feelings or actions always emerge in the most ‘violent’ possible and unexpected ways and that explains Roderick’s actions throughout the story.

These repressed feelings can sometimes disguise in the form of something noble or kind. This outburst is termed as Freudian slip: unintended actions or reactions due to repressed feelings. Usher being the last male clan of his family invites his friend the narrator to the Usher house. This story leaves us with many questions beginning with no complete explanation of the narrator’s motives for arriving at the house of Usher or the other way around, why did Usher invite his friend? A few possible reasons could be that Roderick knew he would not survive so he wanted someone to witness the last moments or actions that would take place or just be with him, or maybe he wanted someone to justify the sexual tension between him and his sister Madeline.

And if a sexual tension did exist between the twins then his sense of guilt and fear can also be justified. Roderick and Madeline were like two halves of the same circle, and therefore maybe the presence of an incestual relationship would make a little sense. In the contemporary period intermarriages was a popular practice among the upper class royal families and since their family has no enduring branches, all offsprings were probably reproduced incestuously within the perimeter of the house. However, another reason why Roderick could have invited the narrator could be because he may have been homosexual and maybe felt something towards his childhood friend. It is strange why Roderick specifically chooses the narrator and no one else, like the other parts of the story, this part is equally mysterious. Madeline is a ghostly figure in the story, more like she’s in the background, we only hear of Roderick and the narrator spending time together. And hence, the sexual orientation could be a possible explanation.

Roderick seemed to be suffering from hyperesthesia – excessive physical sensitivity, especially of the skin (Oxford Dictionary). At the same time Madeline was cataleptic – a medical condition characterized by a trance or seizure with a loss of sensation and consciousness accompanied by rigidity of the body (Oxford Dictionary). Therefore she never lived in the real world, she was unaware of the circumstances, and absolutely lived in her own world.

They were both mentally unstable, the twins. Roderick and Madeline both looked pale; it’s as if one was ill because the other was. Now this also brings about questions in our minds about the mental condition of their previous generations. In most cases people inherit such disorders. So if we consider the mental disorder to be genetic, the Freudian slip adds to it and makes it worse, and definitely makes a person totally unstable mentally. The narrator’s description give us an idea of how healthy Roderick used to be once and how his health from what the narrator sees after he goes to the Usher house has gone worse.

To sum up Roderick’s character analysis, it can be said, that his disorder is somewhat genetic which is multiplied because of his repressed emotions. What probably made him so scared was people finding out about his past or incestual desires if there were any. And that is why maybe he buried his sister alive, he thought burying the sister would be burying the truth. His sister was the only kin for years alone with him, and since they were halves of the same circle, therefore the incestual relationship does make a little sense. The Freudian slip may have evoked some unusual actions towards his sister resulting into incest.

Analysis of Roderick Usher's character in the story The Fall of the house of Usher. (2017, Aug 25). Retrieved from https://studymoose.com/analysis-of-roderick-ushers-character-in-the-story-the-fall-of-the-house-of-usher-essay 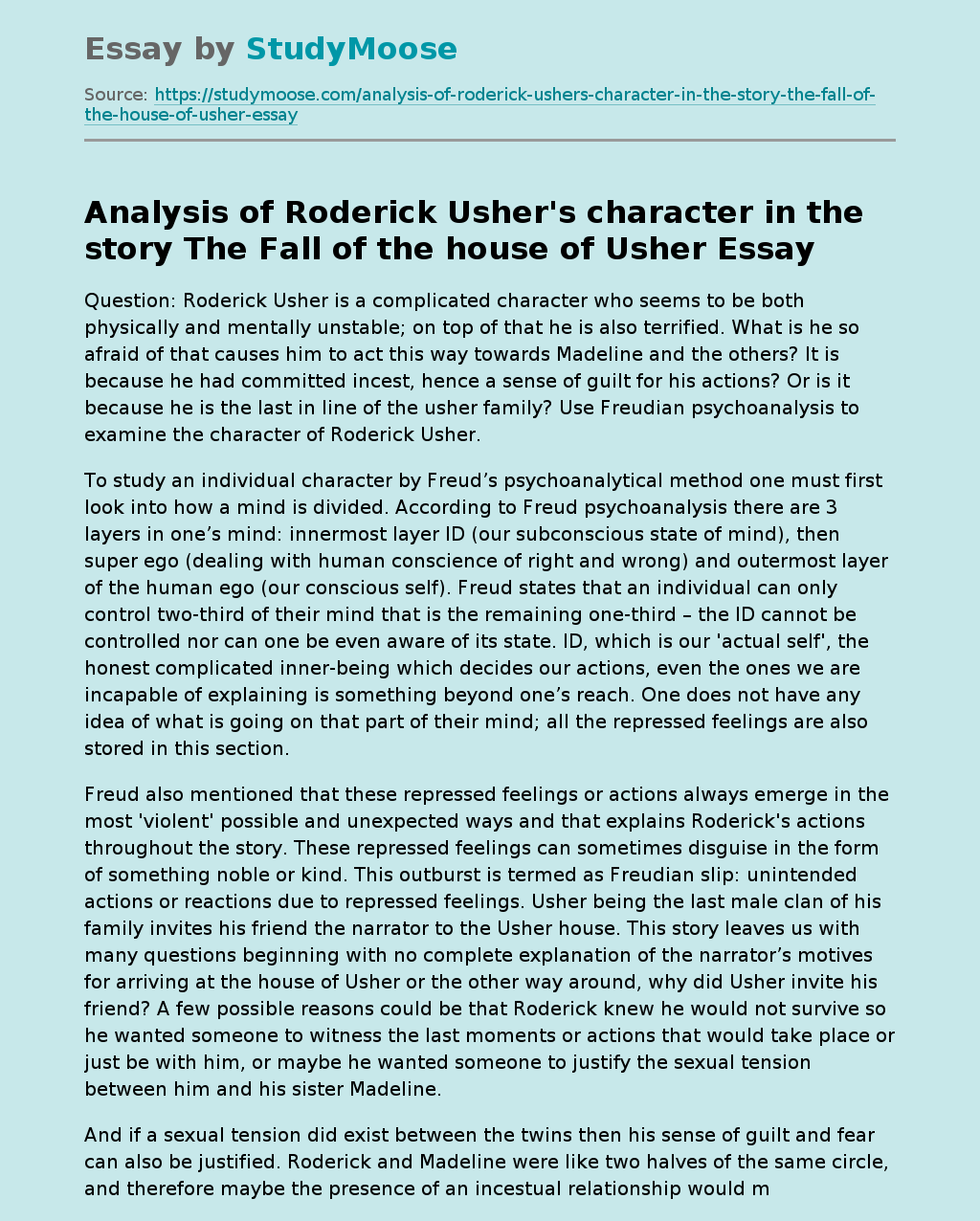