Freudian Theory in "Lord of the Flies"

“The Lord of the Flies” by William Golding is a social experiment with a twist. It is executed by isolating young boys on a deserted island. They arrive on the island because their airplane was shot down while they were trying to escape a bombing in England. The boys are young so they have not been completely molded by society; therefore they have room to deviate quickly. The isolation removes the blinders of civilization and the true identity of the boys and human nature is revealed.

Don't use plagiarized sources. Get your custom essay on
“ Freudian Theory in “Lord of the Flies” ”
Get custom paper
NEW! smart matching with writer

If the reader uses a Freudian approach to reading the novel one will find that Golding’s characters and conflicts follow Freud’s theories of the id, ego, and superego, thus making them more understandable. Studying the Freudian theory allows one to see Jack as the id, Ralph as the ego, Piggy and Simon as the superego, and why they clash.

The famous psychologist Sigmund Freud developed a theory that uses people’s personality traits to classify them into three different categories of id, ego, and superego.

Although every person contains all three of the forces, one can dominates. “For Freud, we are simply actors in the drama of our minds, pushed by desire, pulled by conscience” (Understanding the Id, Ego, and Superego in Psychology). This theory allows one to realize that people tend to exhibit behaviors of their category. The id is the primal force of desires and needs. Impulse is controlled by the id. It can be compared to the devil on the shoulder of cartoon characters, and Mr.

Hyde. Some people do not keep the id in check so it dominates their personality. Signs of the id are forceful speech, physical expression, and emotional outbursts.

The ego is the mediator between the id, the superego, and the external world. Ego is the negotiator between desires and morals. Negotiations with the id help it get what it wants without causing too much damage. It also tries to harness the power of the id to achieve things by regulating it. People that have ego personalities want to please everyone; they tell people what they want to hear. The superego is the moral judge and conscience. “While the ego negotiates with the id, trying to prevent another tantrum, the superego judges the performance” (Understanding the Id, Ego, and Superego in Psychology). Usually the superego’s morals and standards come from figures of authority or society. Most importantly the superego is not affected by impulse or others. Each of the characters in Lord of the Flies each embodies a certain force which is why they can not work with each other.

Jack is a boy who gets angry quickly, acts on his desires, has emotional outbursts, and enjoys hunting and killing, he obviously embodies the id. These traits are a result of the id not being kept in check inside of ones self. Blushing is a sign of Jack’s anger, which happens every time his pride is wounded; “Jack’s face disappeared under a blush of mortification” (Golding 23). Jack becomes angry so often because he does not censor his emotions. He always does whatever he feels like. The main things that Jack likes to do are hunt and kill. He is driven to do it and his “compulsion to track down and kill that was swallowing him up” (47). This is very primal and the desire to kill shows his lack of conscience. Since he becomes obsessed with hunting he also has a bloodlust.

Sometimes Jack burst out in emotion some times happiness; “He [Jack] began to dance and his laughter became a bloodthirsty snarling” (Golding 58), and sometimes anger; “I’m going up the mountain. The words came from Jack viciously, as thought they were a curse” (Golding 119). Jack bursts out because he wants to make it known that he will do whatever he wants, and no one will get in his way. The biggest conflict caused by Jack clashing with the other forces is his separation from the tribe and the creation of his own faction.

Jack cannot coexist with the other boys because of his id state. He does not want to be governed so he leaves; “I’m not going to be part of Ralph’s lot─ I’m going off by myself” (Golding 127). He leaves because his id was under constant scrutiny by the ego and superego of the tribe, so he acted on an impulse. This causes conflict because he takes almost all of the boys with him. Later the same boys kill Simon and Piggy, and hunt down Ralph. Although the id can be beneficial, without the checks from the other forces nothing productive or any long term good can come from it.

Ralph is the islands leader he seeks the approval of every one, he is highly influenced by the superegos, he is the only one who can reason with the id, and he can use the id to his advantage, therefore he can be classified as the ego. The ego is the only mediator between id and superego. Ralph strives for the approval of the other boys. He says things that will make them look up to him; “He’s [Ralph’s father] a commander in the navy. When he gets
leave he’ll come and rescue us” (Golding 13). He says things like this because he thinks if he does the boys will like him more. Some things that Ralph wants to do come from the suggestions of the superego; “The first thing we ought to have made was shelters down there by the beach” (Golding 45). This influence from the superego becomes Ralph’s goal.

This happens because he is ego; the id would not heed the suggestions of the superego. Ralph is the only one who can negotiate with Jack, who is the id. When Jack does not become chief, Ralph negotiates and gives him the consolation of having an army of hunters; “The choir belongs to you of course. They can be an army─ Or hunters─ They could be” (Golding 23). He is able to make sure that the id does not go wild or revolt by offering it other choices. Ralph uses Jack to help him keep a fire; “We’ve got to have special people for looking after the fire. Any day there could be a ship out there.” “Ralph I’ll split up the choir my hunters, that is into groups, and we’ll be responsible for keeping the fire going” (Golding 43). Ralph is using the ego’s influence on the id to accomplish a goal. The gradual breakdown of the tribal assemblies is caused by Ralph being the ego. He is not assertive enough as a leader and is overly concerned with the influence of the superego. He is also worried about what people think of him and if he is making them happy. The ego kept order on the island longer than it would have lasted if it was not present.

Simon and Piggy are the only boys that bring morals and the values of society to the island, they act as the superegos. Piggy often reminds the boys of the grownups and the rules of where they came from; “What’s grownups going to think?” (Golding 84). He does this because his superego cannot stand rules being broken. He constantly reproaches their behavior and tries to invoke rules. Simon displays more of a moral value; “Then, amid the roar of bees in the afternoon sunlight, Simon found for [the littluns] the fruit they could not reach…[and] passed them back down to the endless, outstretched hands.” (Golding 51).

He does what is thought of as good and right. He is superego but not in the way piggy is. Piggy’s superego conveys rules, Simon’s conveys morals. Piggy and Simon are both killed because they are superego. The id cannot tolerate the blocks of value set up by superego, so it seeks to destroy them. With the superegos out of the way the id has more freedom to do what it pleases. The superego is vital for a functioning human or society, without it a breakdown will quickly begin to transpire.

Golding’s characters clearly represent Freudian forces. Since each is a different force many conflicts arise. The conflicts would not necessarily have happened if the characters were not set into specific roles. This all makes sense because of the Freudian theory. Golding’s novel demonstrates that in order for civilization or a human to prosper there must be a balance of the Freudian forces. The island lacks a balance of desires, rules, and the pleasing others, which are an essential part of the functioning mind or society, thus the island breaks down.

Freudian Theory in "Lord of the Flies". (2016, Jul 30). Retrieved from http://studymoose.com/freudian-theory-in-lord-of-the-flies-essay 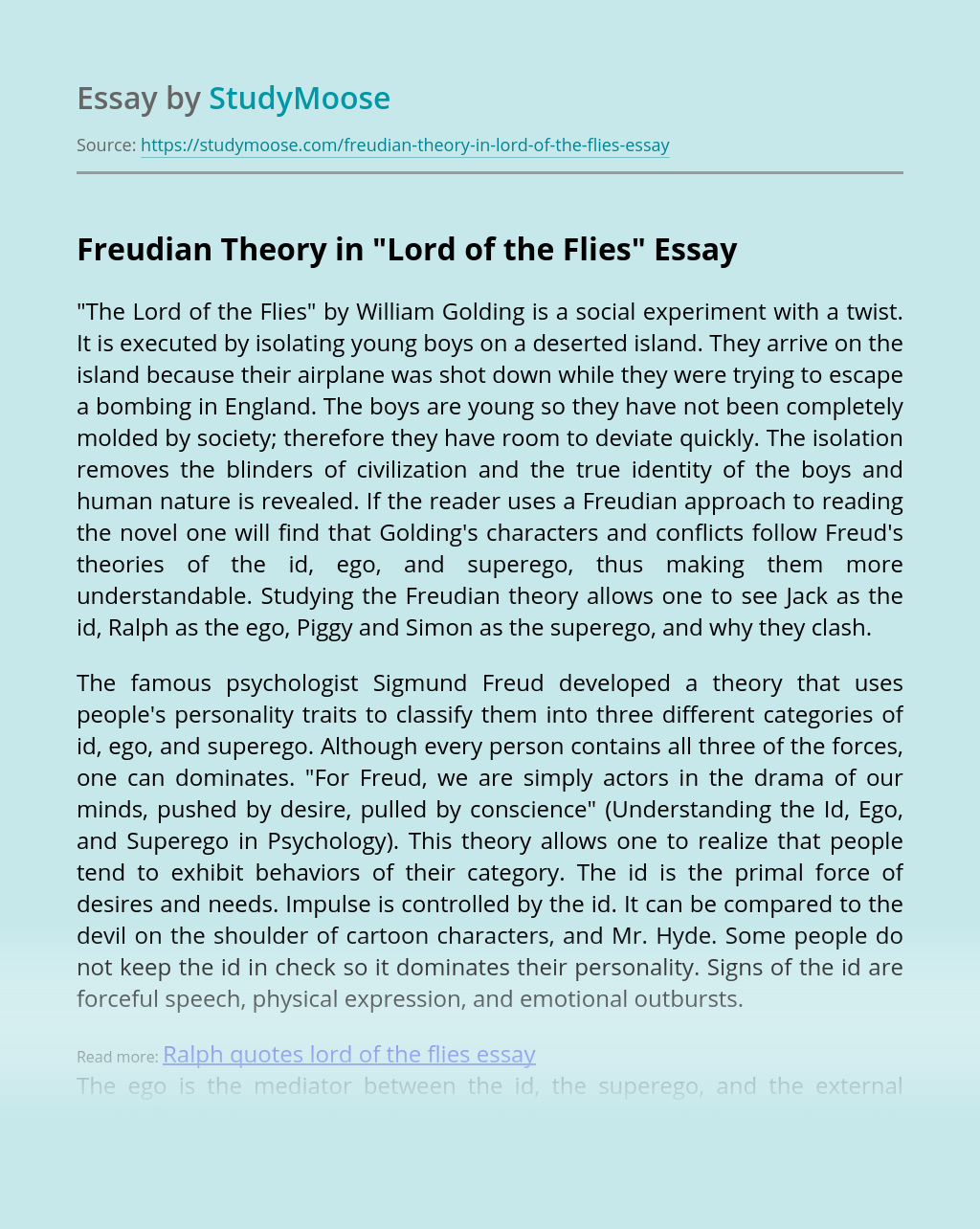