Psychoanalysis is the science of the unconscious functions of the mind and personality. The theories originate from Austrian neurologist, Sigmund Freud. He discovered these as a treatment for health problems and also as a way to understanding more about your mind. In this essay I am going to discuss how these theories discovered many years ago have contributed to popular culture and media. Sigmund Freud divided the soul into the conscious and the unconscious. The conscious is the part of which we are mentally aware and in contrast the unconscious is where all are restrained wishes are stored.

Don't use plagiarized sources. Get your custom essay on
“ Psychoanalysis, Popular Culture and Media ”
Get custom paper
NEW! smart matching with writer

Freud stated that: “Each individual who makes a fresh entry into human society repeats this sacrifice of instinctual satisfaction for the benefit of the whole community”(Storey 2001:91). He also added: “Society believes that no greater threat to its civilization could arise than if the sexual instincts were to be liberated and returned to their original aims”(Storey 2001:91). What Freud is saying here is that we are born imperfect with many instinctual drives.

Proficient in: Media And Culture

From social to sexual drives, basically anything that are ID desires.

He believes that these instinctual desires, especially sexual have to be restrained in the unconscious as they would have a detrimental act on society if they were to be followed through and would cause us to act in inappropriate manner to the views of our cultural society. This is where psychoanalysis demonstrates to us how it contributes to media and popular culture. It does this by teaching us certain ways to behave in order to fit in.

There are right and wrong ways and psychoanalysis gives us an explanation to how our soul teaches us the appropriate mannerisms.

Freud continued on with his discoveries and further divided the psyche into the ego, the ID and the superego. The ID is something we are born with and is totally unconscious. It is driven by the pleasure principle which means that it wants instant satisfaction for all its desires. Freud described the ID as the: “dark, inaccessible part of our personality”(Storey 2001:92) It is impossible to change our ID and are instinctual desires. The ego is the reality part of personality. It tries to satisfy the ID and its desires after weighing up the pros and cons and waiting until an appropriate time to do so.

It develops as in becomes more in touch with culture, furthermore creating the superego. The superego is where we adopt qualities from people who have learnt how to cope in society, mainly are parents and other important figures in our lives at the time. By learning from other people and from what we hear and see on television etc we determine a sense of right and wrong. As a result, our superego helps to restrain the unacceptable urges of the ID, and tries to make the ego act in an appropriate manner that society expects and requires.

Furthermore this psychoanalysis theory and breakdown of the psyche demonstrates to us how culture and media play a fundamental role on how we act in society. Its like a big circle, we learn how to act from elders and society and then people learn from us and so on. John Storey describes the superego as “the voice of culture” as it is what we learn from and Freud says that “our nature is governed by culture”(Storey 2001:92). He believes that human nature is in fact something that is not natural and controlled by the ever changing culture and media at that particular time.

In my opinion, the ego of a person depends on the era they live, who they are surrounded by, the media and many other social and cultural factors. We learn from our contact with society and culture and that includes who we are with or what we here on TV, or see in the newspapers. Whether it be intentional or not, we consume all of that information and that forms are opinions on what is right and wrong etc and makes us who we are. We are in fact controlled by culture and what is going on around us, as this is the make up of our personality and determines the way we act in society.

Furthermore, the superego keeps everything in balance. Without it we would be driven by our pleasure principle (ID) and not know how to express are opinions correctly or behave, essentially causing havoc. This results in their being a constant, ongoing conflict between the pleasure and reality principle. In conclusion, Sigmund Freud and Jacques Lacan have been greatly influential when it comes to culture and media. In my opinion the theory of psychoanalysis can be seen in everyday life when it comes to watching films etc as everything can be interpreted and has an effect on us.

It had a large impact on how sound work in early childhood development and also in cinema. Psychoanalysis can be used to interpret different meanings, and what you get from it can vary from observer to observer. The cinema is full of hidden meanings and tempting us with desires. Slavoj Zizek states that: “The cinema doesn’t give you what you desire, it tells you how to desire” (Zizek:2007). When we are watching a film our instinctual drives are not fulfilled but it tells us how we should desire, and can be seen as a form of release.

Many would argue that not every human desire has to be taught such as sleeping or drinking but many would argue they are not desires just basic needs. For an actual fact the desire is in the quantity of how much we want. The media affects are desires greatly by large and effective ad campaigns. Take for example McDonalds, the ad campaigns, the way they make the food look and its popularity entices us to desire it. If there wasn’t thousands of them an it wasn’t that popular I doubt we would desire it as much, however, it’s a big part of our fast-food culture. Psychoanalysis is very effective and demonstrates to us how our psyche works. 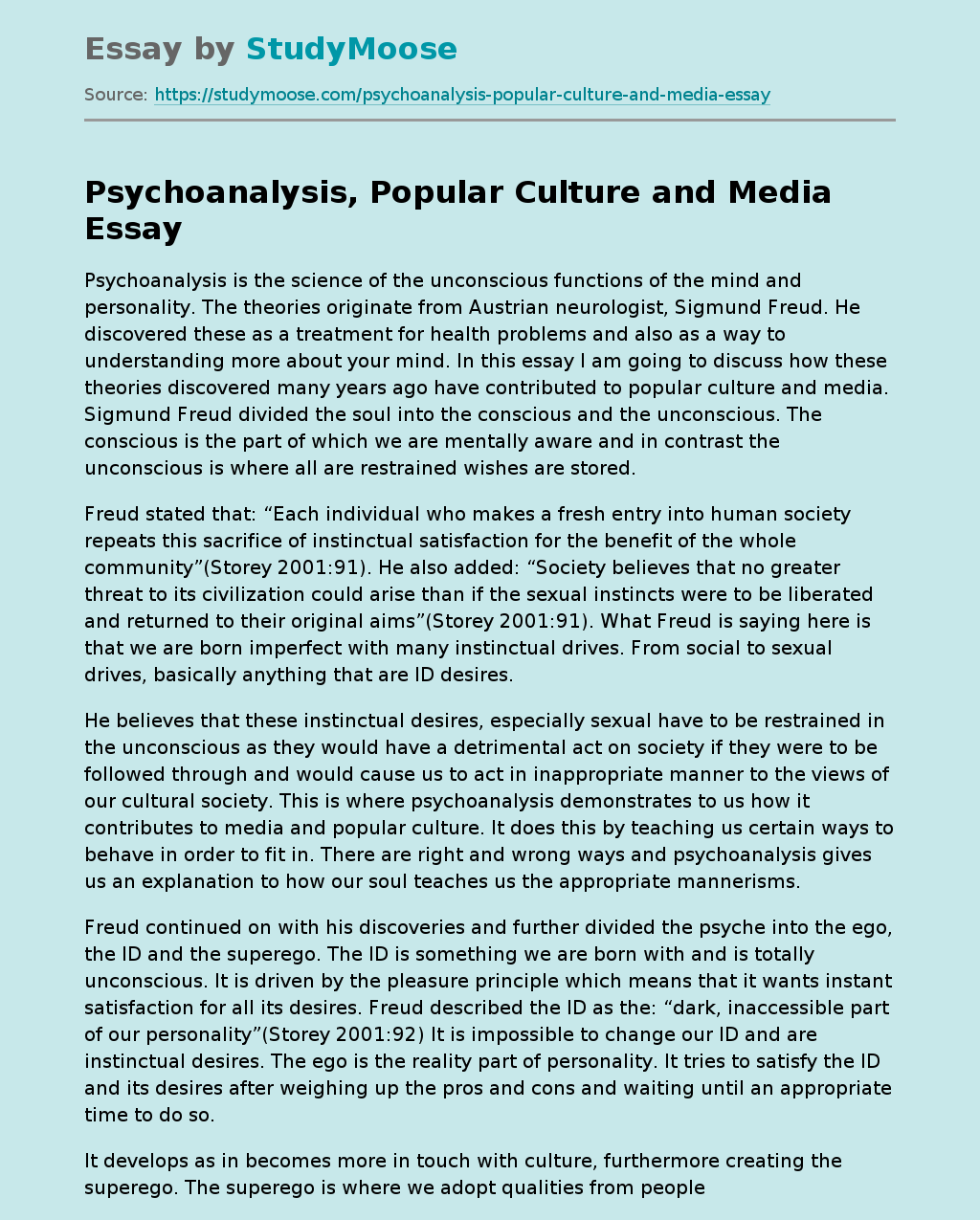