Freudian literary theories in "A Martian Sends A Postcard Home"

Throughout Craig Raine’s seventeen-stanza poem several functional devices become apparent with defamiliarisation being the most prominent. Raine also utilises alienation to enable the audience to observe Earth and human behaviour from a Martian’s “alien” point of view. Marxist theories aid in the interpretation of this poem in that Raine suggests that the printing presses rule the world- or at least its censorship. Freudian literary theories also come in useful when analysing “A Martian Sends a Postcard Home” especially with the last two stanzas being about the metaphysical world of dreams.

Don't use plagiarized sources. Get your custom essay on
“ Freudian literary theories in “A Martian Sends A Postcard Home” ”
Get custom paper
NEW! smart matching with writer

Raine’s unusual world hypothetically assumes a future state, where Martians do exist to the extent that they have landed on Earth and are able to have mail delivered back to their home planet giving the poem a somewhat farcical nature . However this poem makes one of its functions very clear; it raises the question of are we alone in the universe straight to the forefront of our minds for a fresh examination.

The structure of “A Martian Sends A Postcard Back Home” is very much like a postcard in itself, only this is a confused postcard. Postcards rarely require a response however, this one certainly does in the form of clarification. The Martian gets confused with the difference between a baby and a telephone, (st10-12), emphasising the confusion between technology and the natural instigated in stanza one, with “Caxtons” being “mechanical bird[s]”, meaning newspapers and books.

The suggestion of literature controlling our emotions brought forth in the early stages of the poem introduces Marxist theory into the poem; ideology in modern capitalist societies suggests that whoever owns the publishing houses controls cultural production, and therefore the strength of capitalism itself .

Also reinforcing Marxist theories throughout the poem is the fact that the poem is stereotypical of all human houses not mentioning poverty or excessive wealth. For example stanza ten;

“In homes a haunted apparatus sleeps,”

This insinuates that all homes have a baby, later revealing it to mean telephones also. Marx theorists believe that there are only two sorts of people: those who labour, and those who profit from labour. This poem disregards that theory, and suggests that all humans are the same with the only difference being whether young or old.

The fact that Raine makes the reader of the poem stand back and defamiliarise themselves from the world, enables one to consider and perhaps scrutinise the way the world is run. Marxists are constantly looking at the world in this way in order to attempt to improve it- often in moves against capitalism. Many of both sociologists and psychologists believe that the best way to judge is to defamiliarise, this shouldn’t be too difficult as Erich Fromm believed that;

Modern man is alienated from himself, from his fellow men, and from nature. He has been Transformed into a commodity, experiences his life forces as an investment, which must bring him, the maximum profit obtainable under existing market conditions

This obviously ties in with the Marxist beliefs that there are the workers, and those who are worked for.

Another point from Raine’s poem that adds to Marxist subjects is that of the “Model T”, referring to the car made by Ford. This manufacturer being a Western huge-scale corporation would definitely be a topic for Marxist theorists to discuss, them of course tending to be against the capitalist corporations. One can certainly read Raine’s negative stereotypes in the way that he portrays these companies, and Western societies as a whole throughout his poems, not only this one.

When Raine depicts the pulse and its comparison with a watch, (again emphasising the confusion between technology and the natural), the subject of the importance of time to the smooth running of the planet emerges. Without time the western capitalist world would be in turmoil, but even the “Third World” needs time in some form or another. Where would we be without our watches, but more importantly where would we be without our pulses! After all one can never regain time, the only conclusion is death. Other questions that are brought to light concerning time are those of why it is so significant and should it really be that important? In the poem time is so important that the pain of stanzas thirteen to fifteen is an inconvenience rather than a break in proceedings.

In stanzas thirteen to fifteen we see the poet’s humorous imagery of the suffering brought on by the “punishment room”. This obviously referring to the toilet is one of the examples of how Raine uses humour to get his messages across. How much time does the average person spend sitting with their trousers around their ankles in a lifetime? That time could surely be spent being more productive!

The last two stanzas of the poem are based around the theme of dreams:

At Night, when all the colours die,

They hide in pairs

And read about themselves-

In colour, with their eyelids shut.

This is a generalisation on Raine’s part, assuming that all people sleep in pairs, reinforcing the strong imagery of the stereotypical western capitalist countries’ homes: A couple with a car, and child, a television (st6), and literate. Raine writes about the sleeping reading about themselves with their eyes shut, which is where Freudian literary theory is strongest- dreams. The sources of dream symbols have always been a problem to psychologists with hundreds of theories emerging every year. Sigmund Freud believed that Dreams reflect the past, with a “layer of antiquity “, and that they include needs that the individual finds unacceptable or worrying: others would partially agree with that however believing that dreams emphasise fantasy and folklore equally to anything else .

Returning to the “haunted apparatus”, or child imagery, if this is to be interpreted as an infant sleeping then Freud comes back onto the scene. In his “Oedipus Complex” Freud talks of the ego development of the infant between the ages of three and five, which, he argued can later be responsible for a great deal of unconscious torment and guilt. This guilt can be shown through individuals choosing sexual partners who resemble parents or, through their dreams therefore continuing- or rather beginning in this case- the theme of the subconscious and metaphysical confusion within “A Martian Sends A Postcard Home”. A young child is often seen as viewing the world in awe, hence the continued “why” question game. Maybe therefore the Martian is supposed to viewing the world in the same mystified way. A “typical day” to an adult is often seen as dull and uninspiring, however to an alienated figure or an infant it must be a weird and interesting thing.

Through the humorous, (and often tongue in cheek), metaphors we get an unusual perspective on a familiar and often mundane reality. He does this by describing every-day objects and functions in a figurative way, which presumably to an alien would be literal . Raine uses conceit when expressing one thing in terms of another; the most blatant example of this far-fetched device being that “Caxtons are Mechanical birds with many wings”.

“A Martian Sends A Postcard Back Home” is riddled with hidden meanings which in order to understand one must decipher the numerous manifest dream-like, condensed images and riddles he includes. Ranging from the tortures of the “punishment room” to time being “kept in a box, tickling with impatience”. These riddles are all designed to make the reader think more deeply into the meaning of the poem even for only a basic understanding. With this thinking about the riddles comes the deeper thinking about the broader interpretations such as both the capitalist and confusion themes. However, Elena Semino would argue that:

Raine’s poem reads more as a list of clever and suggestive riddles than as a serious examination of the customs of a particular society.

“A Martian Sends A Postcard Back Home” can be interpreted in multiple ways, but the most dominating analysis is that of the poem being intended to make the audience think. The main structural method that Raine utilises is the fact that the poem is a postcard: Not necessarily a postcard from a Martian to his home, but a postcard from a defamiliarised individual looking at the world with a different outlook than that of a Western capitalist society. 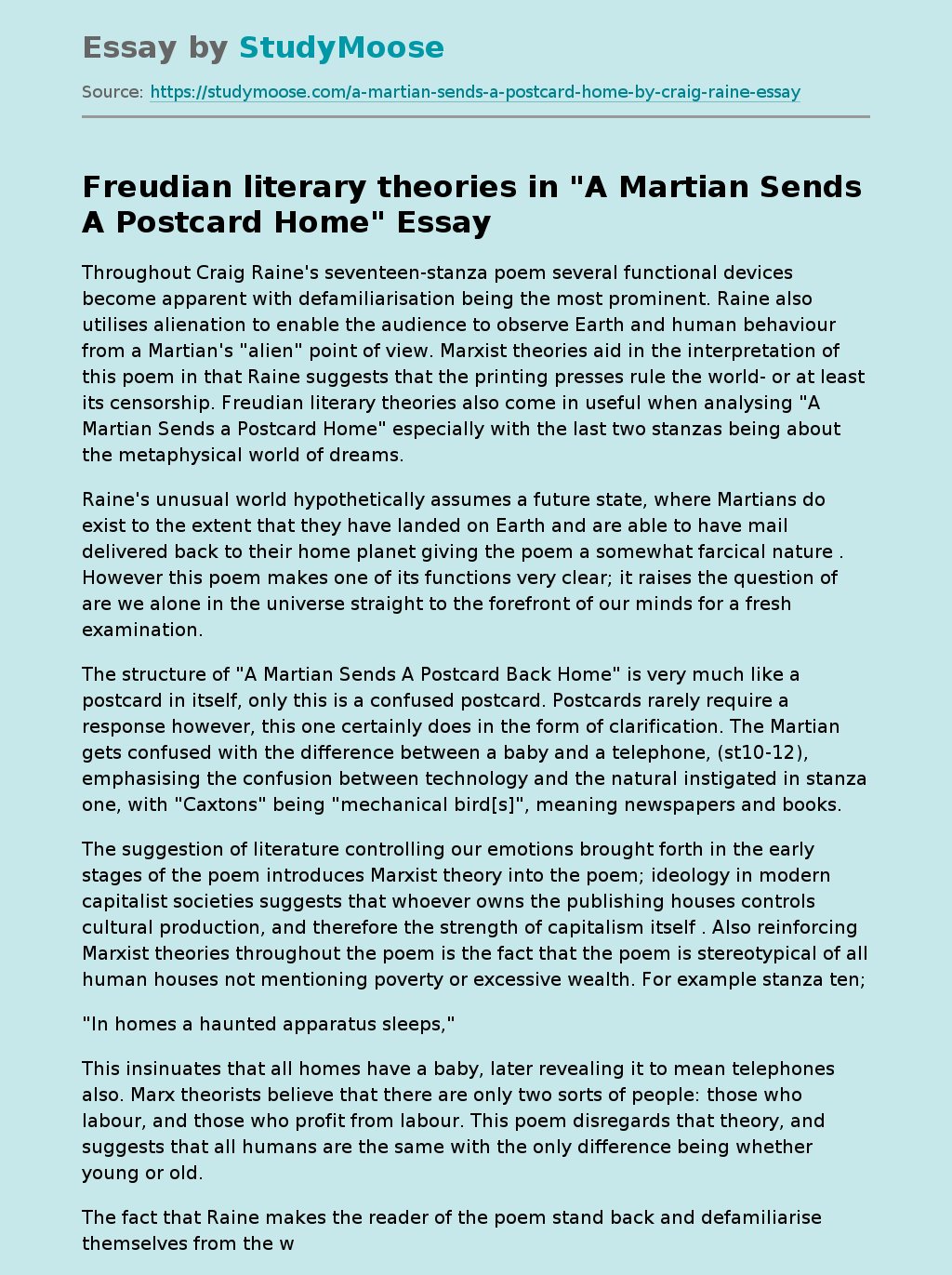