"A Martian Sends A Postcard Home" by Craig Raine

In “A Martian Sends a Postcard Home,” Craig Raine uses many metaphors to describe what a Martian would see if he came to earth. In the first stanza Raine uses metaphors to describe what a Martian may think a book looks like. Raine makes reference to William Caxton, who was the first to print books in England, in the first stanza; “Caxtons are mechanical birds with many wings / and some are treasured for their markings. A book would resemble a bird when opened, the wings being the many pages, and many books have marked a spot in history or is cherished by the person reading it.

Don't use plagiarized sources. Get your custom essay on
“ “A Martian Sends A Postcard Home” by Craig Raine ”
Get custom paper
NEW! smart matching with writer

In the next four lines the Martian observes the different emotions one may have while reading a “mechanical bird,” and although he’s never witnessed one actually flying, which is impossible, he notices that they are sometimes in someone’s hand. In stanzas five and six the Martian is trying to explain fog. “Rain is when the earth is television / It has the property of making colours darker,” meaning when the colors are changed on a television the picture would look unclear, and cloudy even.

Raine simply describes a car as a “Model T,” in the next two stanzas. Explaining a car to be “a room with the lock inside,” is a very imaginative metaphor. By writing “But time is tied to the wrist / or kept in a box, ticking with impatience,” Raine is expressing that the Martian is encountering a watch or a clock.

In stanzas ten through twelve the Martian has come upon a telephone, which he describes as a “haunted apparatus,” which usually “sleeps,” and cries, or rings until it is picked up. Raine also adds the element of humor to the poem, an example is in the twelfth stanza when he writes, “And yet they wake it up / deliberately, by tickling with a finger.”

The Martian believes that humans “tickle” the keypad with their fingers, when they’re making a call. “A punishment room / with water but nothing to eat,” is a bathroom. The Martian observes that “Only the young are allowed to suffer openly,” which is really when I child would be getting their diaper changed, and adults must be alone when they go to the “punishment room.” Finally, in the last two stanzas the Martian is describing the nighttime routine of humans, “At night when all the colours die / they hide in pairs / and read about themselves / in colour, with their eyes shut,” in other words at the end of the day humans close their eyes to fall asleep and dream.

This poem uses a multiple metaphors to describe what a Martian would encounter if he visited Earth. The poem is interesting to read because it requires the reader to use their imagination, the reader must think in order to figure out these everyday things the Martian is seeing for the first time, it’s somewhat of a brainteaser. It’s obvious that the Martian is seeing these things for the first time, it makes the reader wonder why a simple thing such as a watch or a clock is not found on his planet, is time insignificant were he’s from?

"A Martian Sends A Postcard Home" by Craig Raine. (2016, Jun 21). Retrieved from https://studymoose.com/a-martian-sends-a-postcard-home-by-craig-raine-2-essay 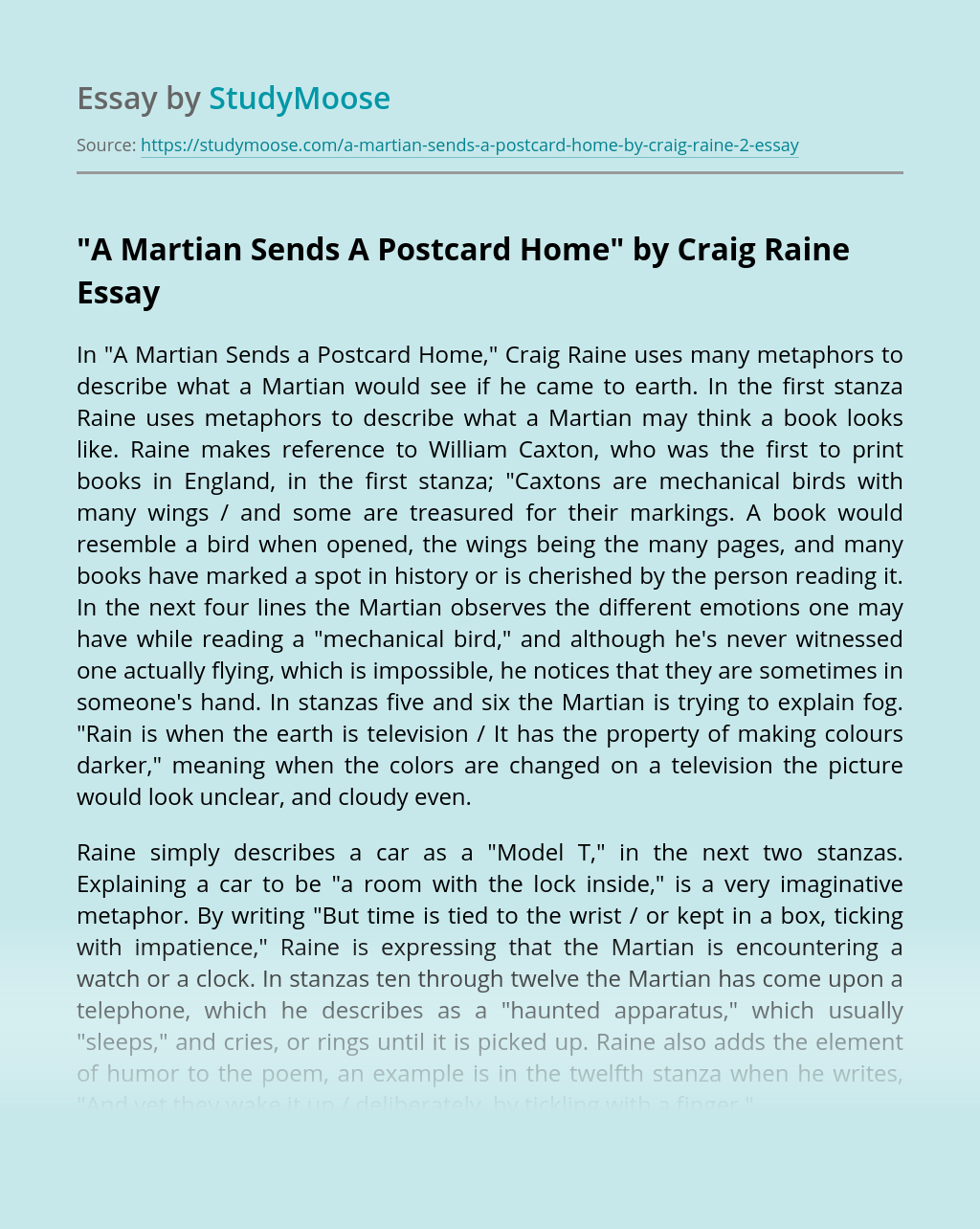