This essay will discuss how the use of irony expresses the theme of revenge in the story “Dumb Martian” written by John Wyndham. This short story is categorized as science fiction, however John Wyndham classifies his series of short stories as logical fantasy. “Dumb Martian” was written after the Second World War, where John Wyndham served as a censor in the Ministry of Information. Mr. Wyndham was inspired by his brother’s success in the writing industry and resurrected his writing career in 1951, producing dozens of science fiction short stories as well as novels.

Don't use plagiarized sources. Get your custom essay on
“ Dumb Martian Essay ”
Get custom paper
NEW! smart matching with writer

“Dumb Martian” is the story of Duncan Weaver, a middle-aged Earthman, as he takes up the job of a “way-load station supervisor” on Jupiter IV/II, a sub-moon of Callisto (itself a moon of Jupiter), his home for the next 5 years. It is little more than a small asteroid, with featureless and formidable rocks and two domes. The larger dome was for living space, while the smaller dome was for storage.

As a precaution against the possible insanity caused by the sheer isolation and loneliness of his 5-year stint, Duncan decides to take a Martian woman along with him.

As well as “company- of a sort”, he wants someone to cook and deal with domestic chores. Duncan constantly moans about her inability to express emotions and her intellect, and soon turns violent towards her. Alan Whint, a scientist stationed on the same asteroid to conduct a geological survey over the period of 12 months, soon discovers Duncan’s behavior and quarrels for Lellie’s, the Martian and her rights.

Duncan sabotages one of Alan’s excursions, leading to his death. But Ellie did not react to Alan’s death or suspect Duncan until the final days of the 5-year stint and avenges Alan’s death.

Lellie’s revenge is a major plot twist in the story, accentuated by irony. Duncan had a feeble impression of Lellie, first shown when he offers a pathetic sum of 700 pounds for her services when “Marts” were priced lowest at 1500 pounds. Duncan also refers to her as “Dumb” and “the very look of her irritated him intensely”. Duncan clearly regards her as inferior; nothing but a possession, which he intends on selling for a high price at the end of his spell on Jupiter IV/II. The author captured Lellie’s revenge by making it remarkable, remarkable enough to cost a man’s life.

Lellie endured much of Duncan’s abuse, both physically and verbally. “His hand slapped her face harder than he had intended” and “sent her sailing across the room in a spin of arms and legs” highlights the horrible treatment of Lellie by Duncan. This abusive behaviour of Duncan, together with the death of Alan Whint which the author had faintly mentioned how Duncan murdered him, sparked a change in Lellie. Lellie wanted to express her anger and prove that she was not dumb in the cruelest way. Lellie fooled Duncan into believing she forgot about Alan and that she did not know what caused his death, and left Duncan outside the dome to slowly die in the emptiness of space. She let him know about her suspicions after she locked him out of the dome by holding Alan’s book in her hands while Duncan stared at her from behind the impermeable membrane of the dome.

The use of irony comes up when the reader finds that Lellie had a sharp contrast from Duncan’s views of her. Lellie seemed innocent, weak and dumb from Duncan and other’s point of views. She could not pronounce proper English and her eyes gave her a permanent “expression of innocence”. It would be easy to believe that Duncan’s perspective of her was true, making the plot twist astonish the reader as much as it had. The author manipulates us into believing Lellie was dumb by the frequent use of the word.

Plus, most of the story is told from Duncan’s point of view so Lellie’s deep thoughts were not expressed at all in the story. All the descriptions of Lellie’s naïve personality lead up to the moment of revenge to create dramatic irony. The irony has a dramatic flair as it shows that at that moment when Duncan realized he was about o die, Lellie was portrayed not as his slave but the master of his faith.

The use of dramatic irony emphasizes the extent of Lellie’s revenge on Duncan to create the theme of revenge. 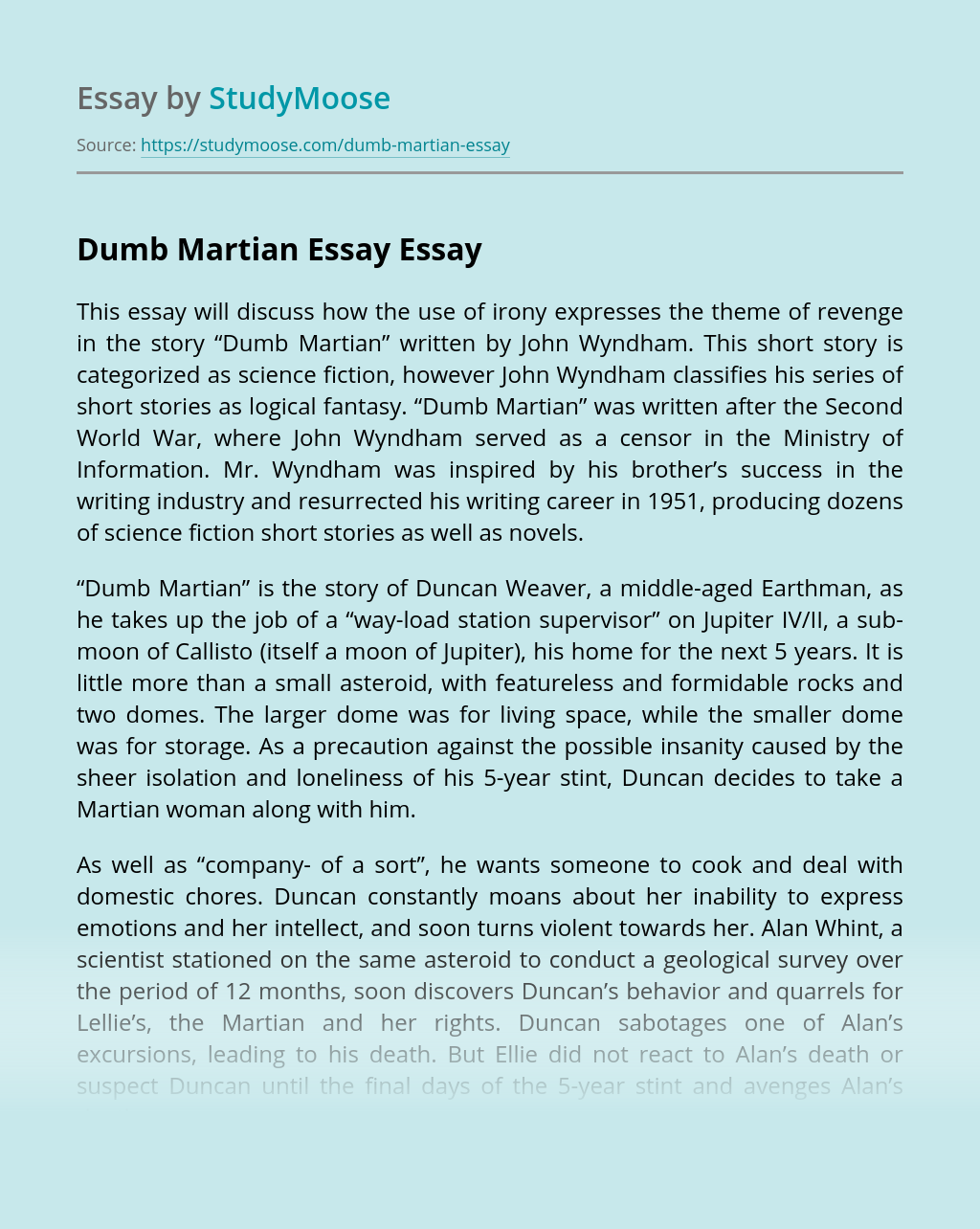