‘In this coming of age story, Charlie must question his conventional notions of what is right and wrong as he navigates small town morality, racism and hypocrisy.’

In the novel ‘Jasper Jones’ written by Craig Silvey, the main character Charlie Bucktin experiences many life changing events that occur throughout the novel, which makes Charlie dramatically change his outlook on life. During the novel Charlie slowly uncovers that life in Corrigan is made up of rumours and lies. Charlie learns a great deal about himself, others, Corrigan and important decisions that teaches him some of life’s great lessons.

Don't use plagiarized sources. Get your custom essay on
“ Novel Jasper Jones by Craig Silvey ”
Get custom paper
NEW! smart matching with writer

The protagonist of the novel Charlie Bucktin is an innocent little boy until he encounters the ‘fearful’ character Jasper Jones when he appears at Charlie’s bedroom window one night by surprise. Charlie changes his thoughts from right to wrong completely. The town’s thoughts of Jasper are unbearable and should stay away from him. The major event that brings the two boys together is the brutal death of Laura Wishart.

Jasper taking Charlie to where Laura Wishart’s body is, which then Charlie has to face make a decision whether he can keep it a secret it or not. ‘No, it’s too late. Like Jasper Jones, I have seen what I Have seen.

I am involved.’ Charlie makes the choice to keep it a secret from the people of Corrigan. Charlie now starts telling lies to people to protect the ones that he loves. ‘How strange and unsettled I am. Like a snow dome paperweight that’s been shaken…Everything in my world that was steady and sure and sturdy has been shaken out of place, and it’s now drifting and swirling back down in a confetti of a debris’ Charlie compares himself to a nobody before he meets Jasper Jones, but after Charlie has officially meets Jasper he feels as though he has purpose in life.

In the small town of Corrigan it is filled with rumours and lies. A huge amount of secrecy and mistrust is conducted by everyone in Corrigan. The lack of tolerance and understanding of each other in Corrigan creates rumours that are untrue, but people still believe them because they have nothing else to believe.

A character named ‘Mad Jack Lionel’ is an example of which where the people of Corrigan misjudged him ‘but as the myth grows in girth, so too does our fear of speculation and intrigue for the kids of Corrigan’ thinking that Jack Lionel murdered a women. Realistically he was in a car accident which where the women was killed. Charlie and Jasper share thoughts on their views of the world, and are clearly outsiders in the community. The thoughts of Jasper Jones in the community of Corrigan ‘a thief, a liar, a thug’ had no impact on Charlie, he ignores all the propaganda targeting Jasper and pursues an unbreakable bond between the two of them. As Charlie uncovers the town of Corrigan, he realises how racist and hypocritical Corrigan actually is. Not only is the town racist to Jasper, but also to Charlie’s best friend Jeffery Lu. Charlie learns through different situations throughout the novel.

‘Jeffery’s parents are Vietnamese, so he’s ruthlessly bullied and belted around by the boys at school…But he takes it all astonishingly well, which has always eased my guilt given that I’m answer brave enough to intervene. Jeffery is unflappable’ as Jeffery is bullied so much at school he has never looked back at the bullies; he always has a smile on his face. Jasper is also a target for racism in the town of Corrigan. Being somewhat rebellious half-cast young boy, and not socially accepted because he is indigenous. He is the only indigenous member of the community even though the rest of the community treat him as an outsider.

Charlie comes to the conclusion to trust Jasper and not to believe what other people. His learns to not to judge something until you fully understand the situation. The duration of the novel Charlie started off as an innocent little boy, facing many events which made ‘grow up’ and not just think about the importance of himself but by the others around him also. This new found lesson will benefit Charlie later in life as he will make better decisions and back himself, and trust other people which will lead to greater trust and respect between them. 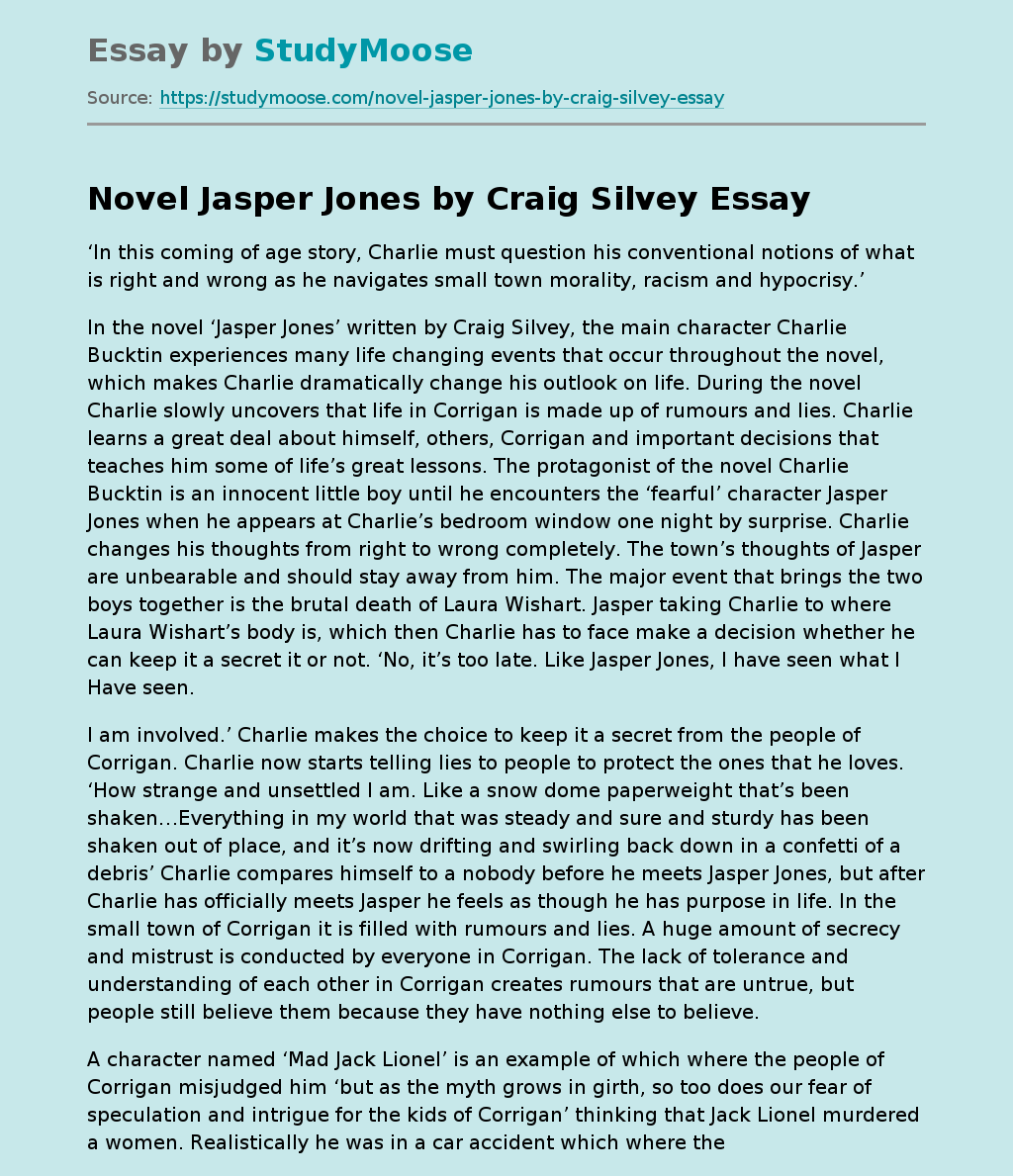