A Psychoanalytical and Feminist Perspective of Frankenstein, a Novel by Mary Shelley

Contrary to traditional readings of texts, which assumed that ideas were inherent to texts, modern texts recognise the role of the reader in shaping meaning through consideration of critical reading perspectives. Frankenstein (1818) by Mary Shelley is an ambiguous novel that offers the prospect for various reading practices that contrast the invited readings. Tragic hero Victor Frankenstein creates a grotesque but sapient creature in an unorthodox scientific experiment. The unnamed creature is rejected by Victor and humankind itself, seeking revenge through murder and terror.

Don't use plagiarized sources. Get your custom essay on
“ A Psychoanalytical and Feminist Perspective of Frankenstein, a Novel by Mary Shelley ”
Get custom paper
NEW! smart matching with writer

This Romantic text explores the dangers of unchecked ambition and desire for revenge, as well as the adverse personal and societal implications resulting from a lack of upbringing and acceptance.

Through the utilisation of a psychoanalytical lens that focuses on the sublimation and division of the human psyche, the Freudian idea forms that our we need to satisfy our unconscious or it will haunt us. Shelley constructed the relationship between titular character Frankenstein and his monster as one of disgust and hatred, and their attempts at revenge results in their own moral corruption and depravity.

Through this character relationship and a psychoanalytical lens, the reader can temper the line between the psyches of the id and the ego, in understanding the necessity of psychological balance. As a mad scientist archetype, Victor recounts how he “created a rational creature in a fit of enthusiastic madness, and was bound towards him.” The juxtaposing adjectives of rational and enthusiastic reflect how the monster was born coherent to balance the rampant acts of Victor.

The metaphor that he was bound towards his monster reflects their psychological and physical connection, and how the monster has been moulded as a physical representation of Frankenstein’s unconscious. The monster’s birth did originally satisfy Victor’s unchecked ambition, however through rejection and neglect as a result of abandonment, the monster feels vengeance. Husband of Mary, Percy Shelley wrote how the monster’s “original goodness was turned into misanthropy and revenge,” reflecting how Victor did not satisfy his inner self, and so it began to haunt him, as he refers to his creature a “mental torment.”

Additionally, the creature’s murderous rampages and destructive search for guidance and acceptance mirrors Frankenstein’s own life struggles. The creature’s first-person dialogue states, “while I destroyed his hopes, I did not satisfy my own desires.” While the creature was able to taunt at the sanity of his maker, he needed his ego, Victor, to satisfy these desires for him. Victor feels compelled to do so, stating how he “was the slave not the master… which [he] detested, but could not disobey.” This metaphor that recognises him a servant, reflects how humans are powered by their internal desires, and by avoiding them you only bring about internal corruption and depravity. Both Victor and Frankenstein survive until the end of the novel, as neither the id or the ego can function without the other because it would cause an imbalance in the human psyche. Their character developments and conflict represent the human psyche and its struggle to create a balance between wrong and right, informing a psychoanalytic reader that we need to satisfy our unconscious to maintain a moral balance.

As a conformation to the common 19th Century belief from philosopher John Locke that humans are born as a tabula rasa, Shelley constructs the idea that humans need a mother figure, and their upbringing is vital in formation of their ideologies. By applying a feminist lens to this invited reading, that focuses on the constructionalist view of gender and prioritises the marginalisation of female characters, Frankenstein can be seen to warn readers of the dangers of bypassing the feminine and rejecting the female role in society. Frankenstein circumvented maternity in the birthing process, usurping the major role of women in the text’s context of production. The monster was created in Victor’s “workshop of filthy creation,” and the adjective ‘filthy’ suggests an impurity in the birth. The destruction of the female role soon erupts in Victor’s nightmare, when he thought he held “the corpse of [his] dead mother in [his] arms.” Symbolically, through viewing the death of his mother, this nightmare foreshadows the devastating consequences of eliminating the necessity for females. The monster refers to himself as “the miserable and the abandoned” and “an abortion.” This diction has connotations of rejection, and the universal pronoun of the gives a sense of marginalisation towards not only the monster, but all who feel this way. The monster ends up wreaking havoc in society, which has “fatal effects.” Therefore, it can be seen as a warning as to the effects of a male attempt to take away the role of women in society.

As a representation of the patriarchal context of production, Frankenstein contains passive, marginal female characters, most of whom are deceased by the conclusion. Through an understanding of the omission of major female characters, a reader can utilise a feminist lens to focus on the treatment of women, particularly in the Romantic Era, the idea emerges that women are possessions of their male counterparts. In the time period, women are expected to comply to the needs of men. Minor character Elizabeth is constructed as an innocent, murdered merely for revenge, reflective of her inferiority. Victor’s first-person narration states, “I loved to tend on her as I should on a favourite animal.” This simile suggests she is possessable like a pet, and a willing receptor of Victor’s needs. Her comparison to an animal suggests her inferiority and ability to be controlled. Further supporting this idea, Frankenstein’s monster “demand[s] a creature of another sex,” because “one as deformed and horrible as [himself) wouldn’t deny herself to [him].” The verb ‘demand’ and the idea that she wouldn’t deny herself suggests an aggressive desire for sex, rather than a relationship based on love or amity. Therefore, women are represented through Elizabeth as submissive and easily manipulated, specifically by the dominant men in the 19th century patriarchal society.

The ambiguity of the Romantic novel Frankenstein allows for a successful of a variety of literary reading practices, including a psychoanalytical lens and a feminist lens, forming ideas about the division of the Freudian psyche, and also the marginalisation of women. Therefore, a combination of the literal invited reading, and also using critical perspectives, which enhance understanding an enjoyment of a text, can produce nuanced and complex ideas.

A Psychoanalytical and Feminist Perspective of Frankenstein, a Novel by Mary Shelley. (2021, Sep 16). Retrieved from https://studymoose.com/a-psychoanalytical-and-feminist-perspective-of-frankenstein-a-novel-by-mary-shelley-essay 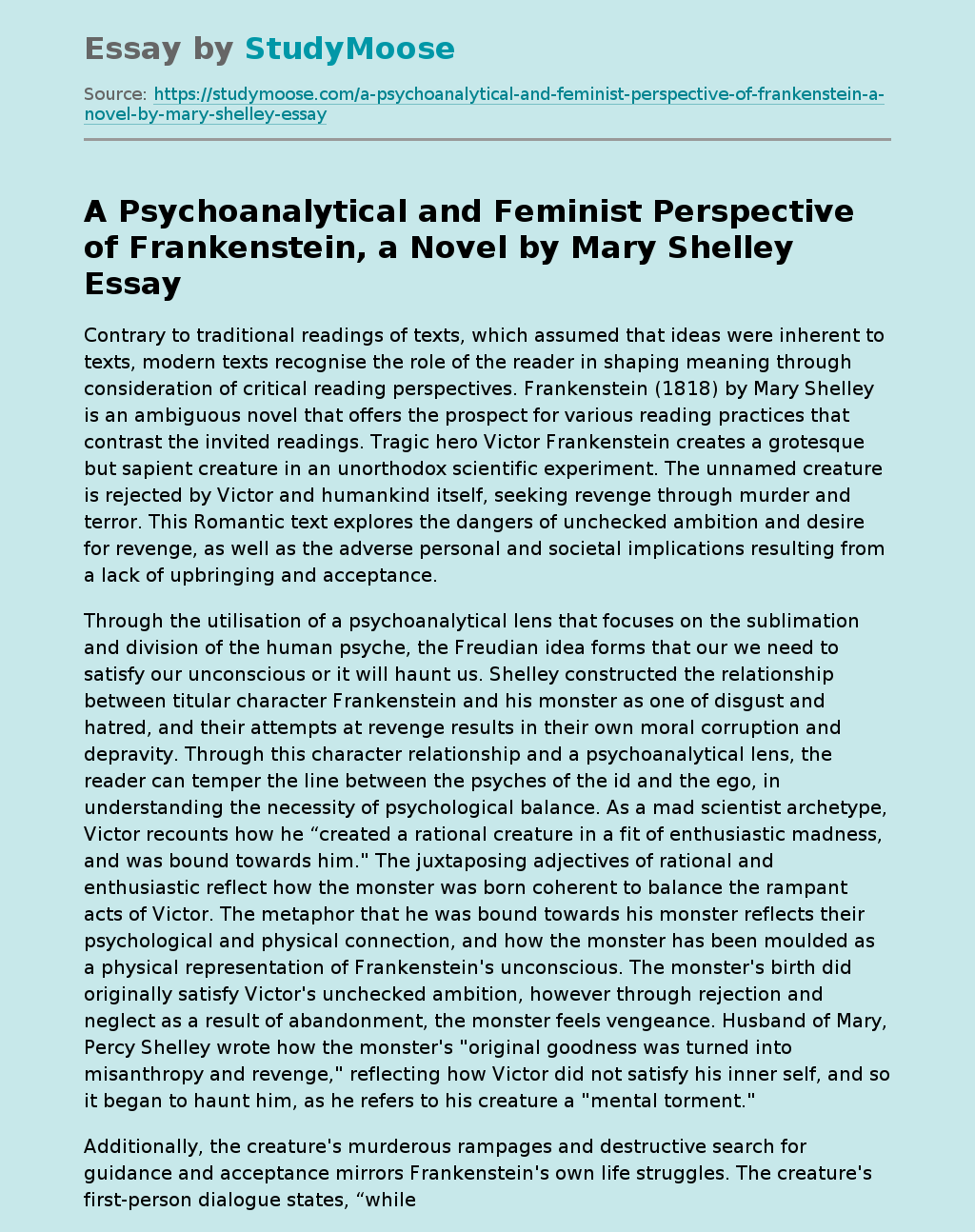