Elizabeth Lavenza is a woman who is constantly commodified throughout Shelley’s work. Elizabeth is objectified by Shelley as an object of Victor’s, since she is only ever discussed in terms of her significance to others. To Victor, Elizabeth is “the beautiful and adored companion of all [his] occupations and…pleasures” “mine, mine to protect, love, and cherish…since till death she was to be mine only”(37). Never within the chapters is it discussed about how Elizabeth feels about exposed and forced to a new family and home.

Don't use plagiarized sources. Get your custom essay on
“ Mary Shelley’s Frankenstein viewed from a feminist lens ”
Get custom paper
NEW! smart matching with writer

Because of this love and care that Elizabeth provides, the commodification that is brought upon her is partly her own fault. Elizabeth’s inability to defend herself in crucial situation leads Victor to constantly see her as a mere object for his own pleasure and nothing more.

The female monster is a character that is commodified by the the societal reject known as the monster as an object that will ensure his euphoria and jubilation. Her entire existence is morphed into an object for the pleasure of the monster.

The monster demands “you [Victor] must create a female for me, with whom I can live in the interchange of those sympathies necessary for my being” (147). The way the monster describes her as “necessary for my being” is very telling towards the attitudes of the dominant male figures in society. Shelley uses these words to show the monster herself does not matter, only the companionship that she will provide for the monster. She is also commodified as a bribe. A bribe in which the monster will abandon the violence and destruction he is causing in the world of Victor Frankenstein, if Victor makes him a female.

Safie is a character who is commodified by Shelley as a token of negotiation not only through the concrete agreement between Felix and Safie’s father, but also the abstract agreement of acceptance between the DeLacey family and the monster. In the gothic novel, Safie is used by her father as a reward for his freedom from prison, but really his freedom from the rejection of his European identity because he is casted out as an “other”. Safie’s father promises Felix “her hand in marriage so soon as he should be conveyed to a place of safety”(126). Safie is objectified as an object of bribery through her father’s reward of his underserved freedom and the loss of Safie’s deserved freedom. Similarly to Elizabeth, Shelley commodifies Safie as a treasure without ever distinguishing her opinion, therefore making her a mere object of a man. Safie is also representative of what the monster wants but cannot achieve because of the societal hierarchy.

This societal hierarchy in which only the females are commodified and the males who do not fit the Eurocentric character are casted out as “others”. The monster thus becomes socially casted out of society, and literally casted out of the DeLaceys home. Through her commodification 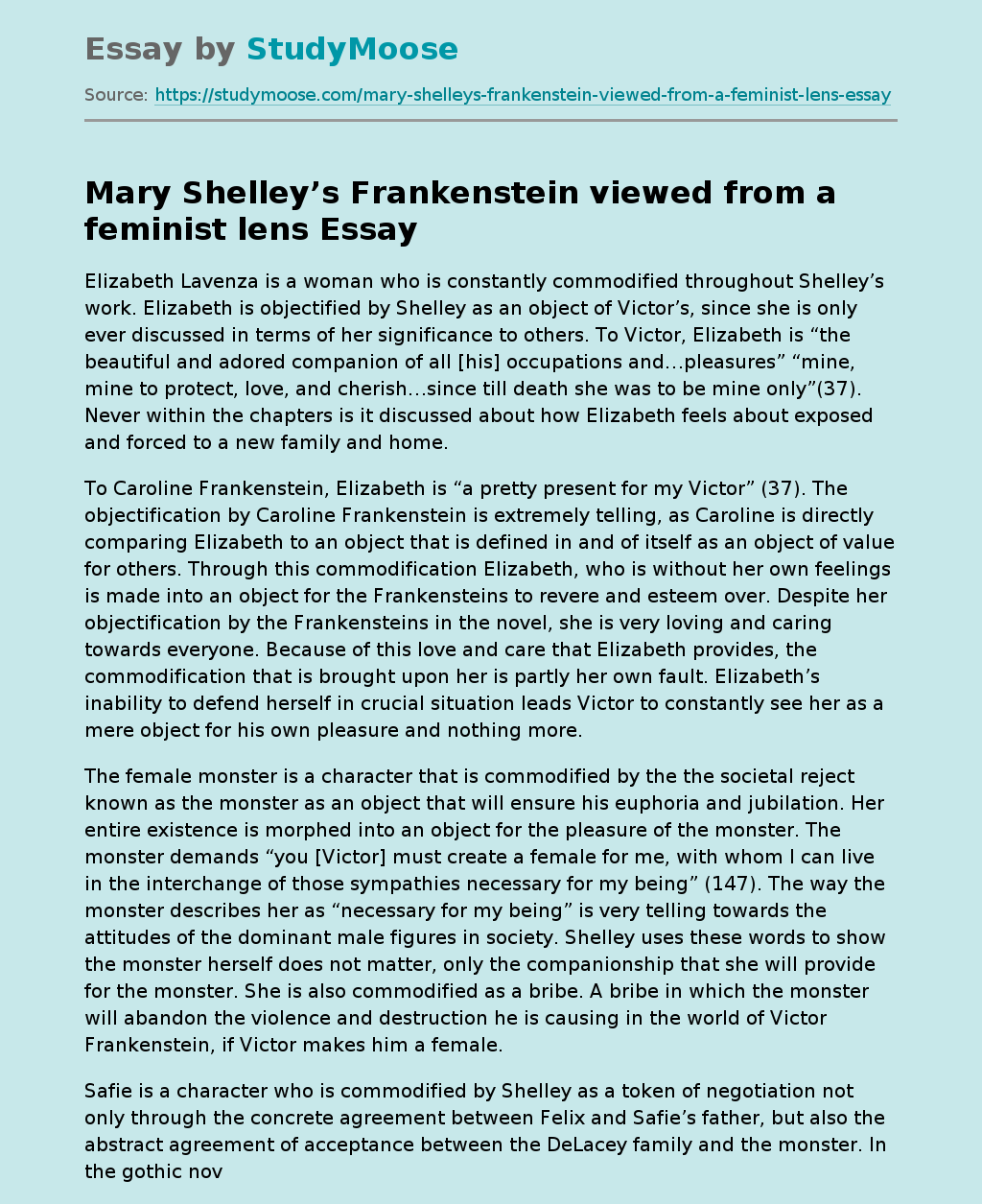