Id, Ego and Superego in Literature

Within Joseph Conrad’s Heart of Darkness, Marlow asserts that “the mind of man is capable of anything–because everything is in it, all the past as well as all the future” (HOD 109.) As Marlow journeys deeper into the Congo he is forced to adapt to the jungle environment and in the process he begins to lose his understanding of societal rules and ideals. His “psychological self” is coerced into adapting to the rustic environment of the Congo hence disturbing the balance between his id, ego and superego.

+84 relevant experts are online
Hire writer
Turn in your highest-quality paper
Get a qualified writer to help you with
“ Id, Ego and Superego in Literature ”
Get high-quality paper
NEW! AI matching with writers

William Golding’s Lord of the Flies similarly deals with this deteriorating awareness of societal standards in foreign environments, but does so with a group of young boys on an uninhabited island. Throughout Joseph Conrad’s Heart of Darkness and William Golding’s Lord of the Flies Marlow, Kurtz and the boys clearly demonstrate the capacity of the human mind in reflection to the principles of Sigmund Freud according to his definition of the id, ego and superego.

In Heart of Darkness, Marlow demonstrates the capability of the human mind as he makes his journey up the Congo River and adapts to the savage environment that surrounds him. While adapting to his environment, Marlow begins to disregard societal standards and hence his “psychological sense” is altered in that Marlow’s ego and super ego subside in his overall nature, resorting to the “pleasure principle” that we now call the id. Marlow’s id begins to cease control of his personality and his innate instinctive nature is released.

It is this imbalance of his “psychological self” which acts as an instigator for the evil found in him and all men. When Marlow states that “Going up that river was like traveling back to the earliest beginnings of the world,” (HOD 105) he is trying to depict his journey up the river as a representation of his discovery of the innate wickedness present in all mankind. The disappearance of Marlow’s super ego is imminent throughout his journey up the Congo. The presence of authority, society, and civilized people begin to fade just as his concepts of right and wrong are lost as he journeys further on and thus the innate wickedness of man emerges. Marlow’s savagery is the result of adaptation and the growing disproportion of his id to his ego and super ego.

His disregarding of his ego and super ego can be seen when he says, “but if you try to shout I’ll smash your head with’…’I will throttle you for good” (HOD 148.) This statement confirms that Marlow is straying further from the ideals of society and shows that Marlow’s perceived self is making a transition from being civilized (superego) to becoming a savage (id.) When Marlow meets Kurtz, he finds a man that has totally thrown off the restraints of his own ego/superego and has deteriorated into the primitive state of the id. Therefore Kurtz serves as an excellent example of Marlow’s assertion in that he has forgotten society to such an extent that he does not even remember his life in Europe.

Kurtz’s isolation in Africa as well as his unbelievable power over the natives corrupted him and drove him to condone unspeakable acts such as cannibalism and human sacrifice (destruction/Thanatos=pleasure for Kurtz.) In Heart of Darkness, Kurtz’s last words depict his terror and his realization of his final fate, “The horror! The horror!” (HOD 154) Kurtz realizes how far he has strayed from society, and finally admits to his evil acts in Africa. Hence, it was the imbalance of the characters “psychological selves” due to displacement from society (society gave them the sense of right and wrong) that caused the innate evil to reveal itself in the characters Marlow and Kurtz. The augmented id created a disproportion between the other counterparts of the “psychological self” and thus facilitated the intrinsically evil nature of all men including Marlow and Kurtz.

In William Golding’s Lord of the Flies, the boys are reduced to an instinctive and almost animalistic state due to the lack of authority and society, as well as the need to adapt to a new primordial surrounding. The boys are stranded on an island by themselves and must adapt in order to assure their survival. When they first arrive the boys act in an orderly fashion, and begin the construction of a governmental system to parallel a functional society. This system is representative of the boy’s super egos. This system soon fails however, when the boys learn that they must revert to their animal instincts (id) in order to survive. This transition from being civilized to becoming savage is revealed in the book when the narrator states, “They bumped Piggy, who was burnt and yelled and danced. Immediately, Ralph and the crowd of boys were united and relieved by a storm of laughter” (LOTF 149.) This example simply depicts the great change that has occurred among the boys in that they further hurt Piggy’s burn wound on the account of carelessness while playing a savage like game.

The fact that none of the children apologize for their acts further prove the transition of the boys from being civilized to becoming savage-like. The simple fact that a group of choirboys, who were exemplary individuals, could change into savages that kill one another further proves Marlow’s assertion that the mind is capable of anything. At the end of Lord of the Flies, the boys come to realize the transformation of their initial choirboy natures when they are confronted with authority in the form of a naval officer. The narrator states that “One of them came close to the officer and looked up. I’m…I’m; but there was no more to come” (LOTF 201.)

Percival has changed so much throughout his time on the island that he cannot even recall his own name. On the whole, three characters can be linked with each of the three psychodynamic principles: Jack represents the id with his constant desire to hunt and kill (death drive,) Ralph represents the ego with his attempts to satisfy both sides of his own mind and others on a greater level while keeping in touch with reality, and Piggy represents the superego by acting as the conscience for the group, maintaining the very principles that the boys have lost. If one were to look at this novel as an analysis of the individuals one would perhaps miss out on the greater picture. By combining the characteristics and actions of all the characters you can really see the greater picture of what Freud describes in his theories.

Both Joseph Conrad’s Heart of Darkness and William Golding’s Lord of the Flies contain characters that are changed from civilized beings, that are able to balance the urges of the id and constraints of the ego/superego, into savages. Within the novels the lack of authority and society as well as the presence of a primeval surrounding causes the innate evil within man to awaken. By removing societal pressures and surroundings, the instinctive id nature overpowers mans ego and super ego. This disturbance in equilibrium causes the innate evil found in all people to manifest itself.

Freud’s conception of the human psyche illustrated that the majority of what we experience in our lives, the underlying emotions, beliefs, feelings, and impulses are not available to us at a conscious level. He believed that most of what drives us is buried in our unconscious. Like mentioned above, these choirboys and sophisticated Europeans never imagined that they would be acting as they did when they reached their respective destinations. The immense unconscious id took over in many of the characters but when brought back into society returned to their previous balances.

William Golding’s Lord of the Flies, published in 1959 by Perigee Trade

Id, Ego and Superego in Literature. (2016, Jul 19). Retrieved from http://studymoose.com/id-ego-and-superego-in-literature-essay 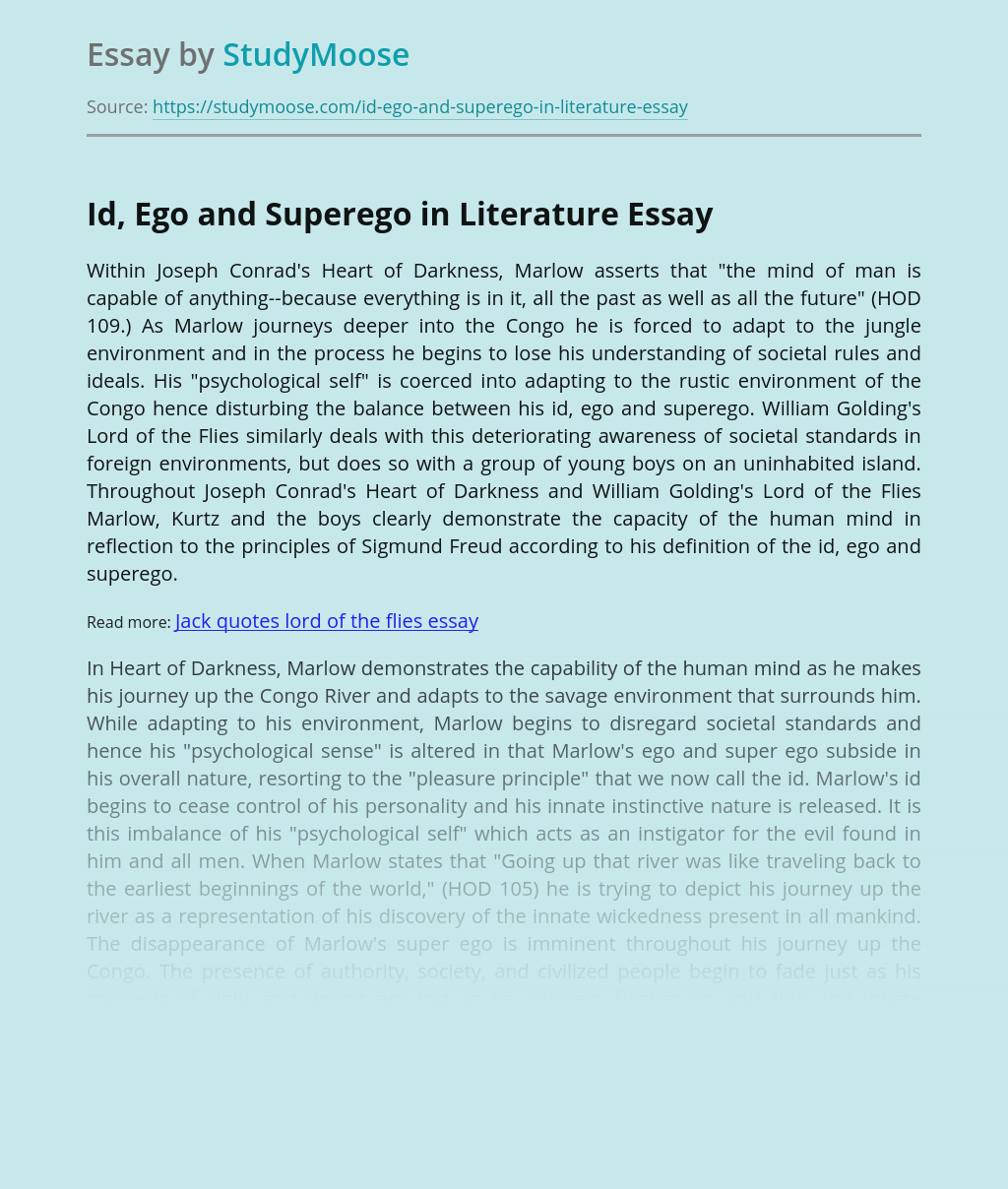 Turn in your highest-quality paper
Get a qualified writer to help you with
“ Id, Ego and Superego in Literature ”
Get high-quality paper
Helping students since 2015
Stay Safe, Stay Original