The Scarlet Letter: A Psychological Analysis

“I experienced a sensation…of burning heat; and as if the letter sere not of red cloth, but red-hot iron.” These words in the introduction to The Scarlet Letter describe the letter as an object that contains power. The power left in the little red piece of cloth represents all the emotional toil that was associated with it – guilt, pain, betrayal, and vengeance. Throughout the novel the letter will stir all these emotions, creating an intense psychological drama. Nathaniel Hawthorne attempted to open a window to the human psyche during the novel to show that humans deal with emotional tumult in complex ways.

Don't use plagiarized sources. Get your custom essay on
“ The Scarlet Letter: A Psychological Analysis ”
Get custom paper
NEW! smart matching with writer

Probably one of the most prominent, if not the most, themes in the novel is guilt. Around every corner, a character is forced to deal with the plaguing guilt that eats away at their souls from the inside. For example, Dimmesdale is actually driven to sickness by his conscience whispering in the back of his mind because of the sin he committed.

At one point, he is driven to the edge of sanity as a result of the grinding, stewing emotion that he won’t let himself reveal. Also, for a period, Hester Prynne’s life was ruined, simply because she could not face another townsperson as a result of the guilt she felt. This was illustrated in the scene where Pearl constantly strewn Hester’s chest with flowers, and Hester resisted the impulse to cover her breast: “whether from pride or resignation, or a feeling that her penance might be best wrought out by this unutterable pain, she resisted the impulse, and sat erect, pale as death…”However, Hawthorne is showing the positive tendencies of human behavior.

He does this by displaying that humans have a conscience; morals; a sense of what’s right and what’s wrong.

They say that idle hands are the devil’s workshop, and the saying, while it doesn’t fit the situation completely, can be related to the novel. Through all the guilt and pain that Hester suffered, what did she do? Did she sit around, feeling sorry for herself? No. she put a pair of sewing needles in her hands, made some clothes, and took care of Pearl. And gradually, she began to feel better about her life. At the end of the novel, in fact, the people of the town no longer saw the scarlet “A” as standing for “adulteress,” but for “able.” This shows that through keeping herself busy and living her life the way she should besides stewing in pain and guilt, Hester once again became a respected member of society. However, we could see that Reverand Dimmesdale was almost stagnant in the community apart from his sermons, and the affect on his health was tragic. He let the guilt and pain get the better of him, and it slowly corroded away his soul until the was nothing left.

A third point that Hawthorne is attempting to make in the novel about human psychology is that it is the natural instinct of man to find companionship to share pain with. For example, as the reader, one never really sees Hester alone and dealing with her guilt and inner anguish: when she needed Dimmesdale, she met him in the forest; most times she was with Pearl anyway; and even in prison, Chillingworth at least made for a human, even if he did little to comfort Hester. Hawthorne also showed that having company to share pain with played into how well the character dealt overall with the situation. Hester had company and in the end turned out well.

However, Dimmsedale, yet again the example of the negative side of the novel, did not have a friend to turn to when he needed one, and we know how he eventually turned out. One example of this was on the night of the scene on the scaffold, when Dimmesdale stood alone at the top, and Pearl and Hester eventually joined him. Nothing was said, but just the fact that they were all together helped all of them deal with whatever guilt or turmoil they were feeling, and was actually one of the only times Dimmesdale had any company.

In conclusion, man deals with pain in several ways, most of which are psychologically complex and some of which that are completely unexplainable. Through the feeling of guilt, keeping oneself busy, and finding companionship, the characters in “The Scarlet Letter” dealt with their emotion, sometimes successfully, sometimes not. However, it all goes the same for humans everywhere, so we can all, one day, deal with our own scarlet letters.

The Scarlet Letter: A Psychological Analysis. (2016, Jun 25). Retrieved from https://studymoose.com/the-scarlet-letter-a-psychological-analysis-essay 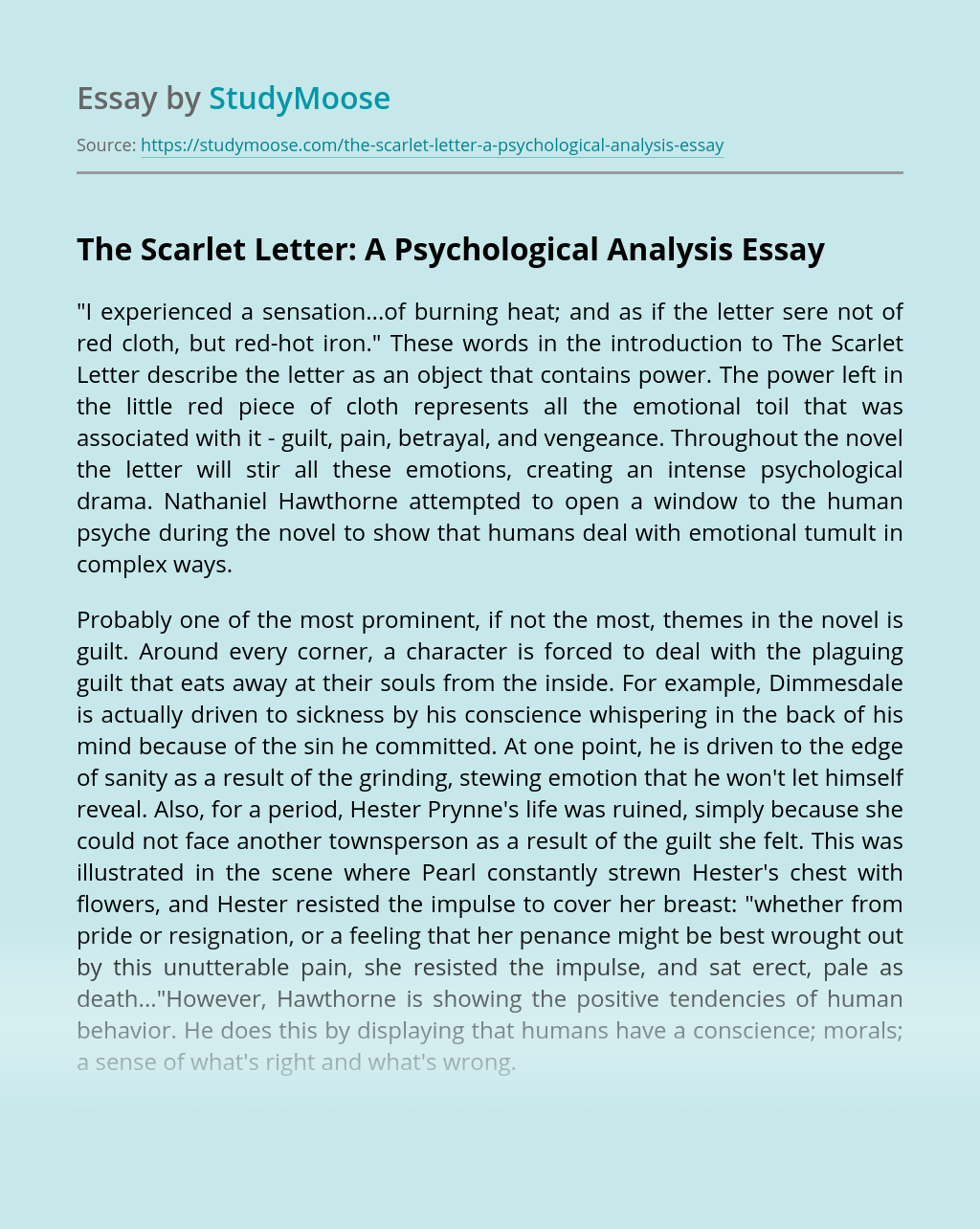