Good and Evil in Scarlet Letter

“Inside each of us, there is the seed of both good and evil. It’s a constant struggle as to which one will win. And one cannot exist without the other” (Burdon). The novel _The Scarlet Letter_ perfectly illustrates this point using complex and intricate characters that mirror reality with both positive and negative aspects of their personas. The story begins in mid-17th century New England with Hester Prynne being publicly humiliated for having a child out of wedlock. She is branded with a scarlet letter “A” as an adulterer but refuses to disclose who the father is.

Turn in your highest-quality paper
Get a qualified writer to help you with
“ Good and Evil in Scarlet Letter ”
Get high-quality paper
NEW! AI matching with writer

Soon after, Hester’s former husband shows up under the pseudonym of Roger Chillingworth and makes Hester promise not to tell anyone who he is as he tries to hunt down her lover. As the story progresses, the reader and Chillingworth discover the identity of Hester’s beloved as the minister, Arthur Dimmesdale. As Chillingworth begins to psychologically torment Dimmesdale, He progressively becomes more ugly, evil, and twisted.

In his novel, _The Scarlet Letter_, Hawthorne uses the symbolism of the scarlet letter to convey that within each person exists the capacity for both good and evil.

First, Hawthorne utilizes the scarlet letter to assert that from all evil, some kind of good is blossoms, whether it is drastic or subtle. Even the most unfavorable of situations, such as carrying the burden of the scarlet letter, yields an advantageous quality of some sort. For example, as the plot of the story begins, the women of the town are slandering Hester Prynne for her misdeeds and discuss ways to punish her and brand her as an adulterer.

While the unforgiving women attempt to scorn her, Hester enters the scene from the prison with her badge of shame. Hester Prynne had sewn her own scarlet letter to advertise her sin.

“It was so artistically done, and with so much fertility and gorgeous luxuriance of fancy, that it had all the effect of a last and fitting decoration to the apparel which she wore, and which was of a splendor in accordance with the taste of the age, but greatly beyond what was allowed by the sumptuary regulations of the colony” (Hawthorne 9). Even in the strictly puritan colony of Boston, Hester chooses to retaliate as an individual rather than reform. Hawthorne uses the apparent mark of shame to express Hester’s distinction as an elegant, strong, and fertile woman that can derive the beauty from even the worst situations.

Later in the book, the governor questions Hester on why she should be able to keep Pearl. He calls Hester “One who hath stumbled and fallen amid the pitfalls of this world” (61) and questions her ability to care for Pearl’s “temporal and eternal welfare” (61). “‘I can teach my little Pearl what I have learned from this!’ answered Hester Prynne, Laying her finger on the red token” (61). From the governor’s view, the scarlet letter is a clear symbol of sin. However, in her own reality, Hester has shifted the meaning of the letter to not only a valuable lesson that she can pass on, but also a badge that exhibits her individuality along with her immorality. The scarlet letter undoubtedly displays that there is merit in even the worst evil or disgrace.

Secondly, Hawthorne employs the scarlet letter to convey that within all good, there is evil hidden, no matter how pure the element may seem. Even the most exemplary appearing citizens may conceal dark and evil sins. For instance, as Pearl is playing by the sea, her mother watches her make an array of things out of seaweed. Along with the scarves and headdresses, Pearl creates a letter “A” on her own bosom. As Hester questions her as to what she thinks it means, Pearl begins to inquire Hester in response. “‘What does the letter mean, mother? And why dost thou wear it? And why does the minister keep his hand over his heart?’ ‘What shall I say?’ thought Hester to herself. “No! If this be the price of the child’s sympathy, I cannot pay it” (Hawthorne 127). Despite the pleas of her child, Hester still refuses to enlighten Pearl to what the scarlet letter on her bosom signifies.

Hawthorne uses the scarlet letter as an analogy of secrets that are held. Many reprehensible acts are kept hidden to protect people who are too young, naïve, or innocent to know the truth. Later in the book, Reverend Dimmesdale becomes mortally ill. As he walks up onto the scaffold, He hardly has any strength left. Dimmesdale must be supported by Hester and Pearl just to stand up. With his last bit of vigor, Dimmesdale announces that he is guilty of the same sin for which the people have punished Hester.

“With a convulsive motion, he tore the ministerial band from before his breast. It was revealed! But it were irreverent to describe that revelation” (198). With all of his strength and life, Dimmesdale died revealing his dark secret: That he was a sinner instead of the morally perfect man he had feigned being. However, as a truly good man, Dimmesdale knew that before he passed, he needed to prove that even the most respected among man concealed some sort of evil and that visible sinners should not be shunned. Hester’s and Dimmesdale’s letters both epitomize the evil that hides within all good.

Finally, Hawthorne uses the symbol of the scarlet letter to prove that no matter how good a person is, he or she can never eradicate evil within his or her self. Even the most holy and kind people have some sort of black tarnish that cannot be erased. Likewise, As Hester confronts Chillingworth about his persecution of Dimmesdale, Chillingworth begins to sympathize with Hester. In an attempt to comfort Hester, if only for a moment, Chillingworth informs her about the council’s discussion concerning the removal of her scarlet letter. Instead of the gracious response he expected, Chillingworth was met with a much colder and wiser retort: “‘it lies not in the pleasure of the magistrates to take off the badge,’ calmly replied Hester. ‘Were I worthy to be quit of it, it would fall away of its own nature, or be transformed into something that should speak a different purport'” (Hawthorne 115).

Even when the opportunity arises, Hester knows that she does not have the ability to escape her dark deed. Despite Chillingworth making a motion that would inevitably improve her life, Hester is very aware of the fact that no matter what she does, her mark would stay with her forever: physically or at heart. Later in the story, Dimmesdale and Hester are planning to run away to England together. As the renounce their old lives, Hester thrusts her scarlet letter across the river to start their new epoch together. However, as they call over Pearl to join them, she refuses to come near.

Hester realizes that Pearl will not come near because of the fact that her mother is missing something that is part of who she is. “But, in very truth, she is right as regards to this hateful token. I must bear its torture yet a little longer…” (156). although Pearl is not exactly sure what the scarlet letter symbolizes, she knows that it is an important part of Hester that she cannot evade. Hester quickly comprehends Pearls wisdom and admits that she must live with her sin. The scarlet letter clearly demonstrates that good can never fully cast aside evil.

In conclusion, the scarlet letter in Hawthorne’s _The Scarlet Letter_ represents the unbreakable link between good and evil within everybody. Whether he is stating that from all evil, good blossoms; within good, people hide evil; or that good can never fully cast aside evil, Hawthorne strongly conveys the point that Evil and Good cannot exist within someone without their counterpart.

Good and Evil in Scarlet Letter. (2016, Aug 08). Retrieved from https://studymoose.com/good-and-evil-in-scarlet-letter-essay 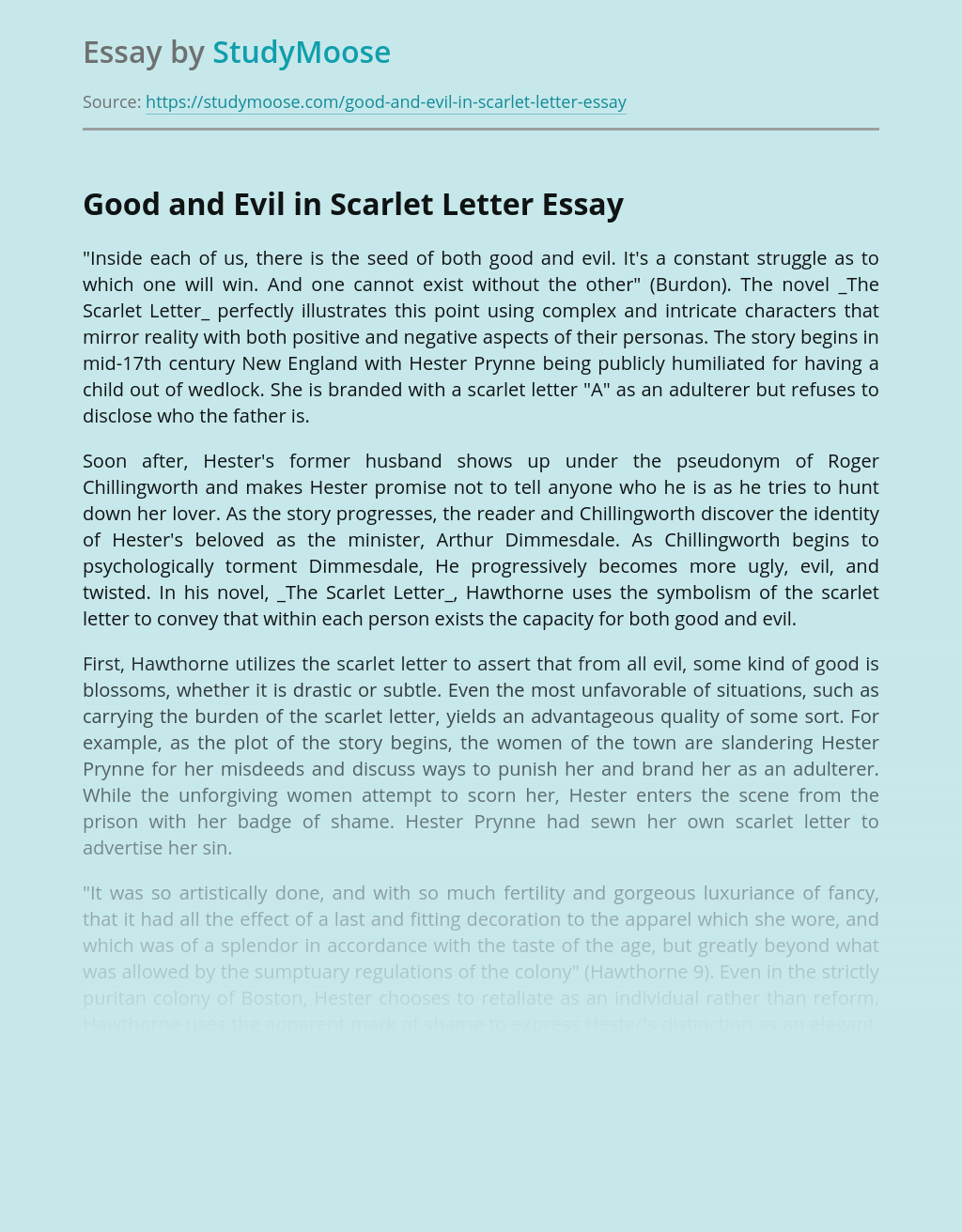 Turn in your highest-quality paper
Get a qualified writer to help you with
“ Good and Evil in Scarlet Letter ”
Get high-quality paper
Helping students since 2015
Stay Safe, Stay Original