The Puritan Society is an important part of American history, it outlines America’s brief moment of theocracy and extreme social order. The Scarlet Letter, written by Nathaniel Hawthorne, depicts Boston, Massachusetts during the time of puritanism and follows a young woman, Hester Prynne, through her trials and tribulations under her sin. The Scarlet Letter is repetitive of its time period through Dimmesdale’s state of religious anxiety and self-punishment, the glorification of punishment by puritans, and puritan fear of witchcraft and the devil.

Don't use plagiarized sources. Get your custom essay on
“ The scarlet letter ”
Get custom paper
NEW! smart matching with writer

In The Scarlet Letter, Arthur Dimmesdale lives in a state of religious anxiety and punishes himself for his sin like many other puritans have done.

Dimmesdale, the clergy man, knows of his sin of adultery and feels guilty for it. His guilt increases every day until he begins to punish himself for it. Pbs writes, “Puritans lived in a constant state of spiritual anxiety, searching for signs of God’s favor or anger,” This describes how much puritans think about God every day.

Similarly, Dimmesdale worries about his sin all the time.

Hawthorne writes; In Mr. Dimmesdale’s secret closet, under lock and key, there was a bloody scourge…he kept vigils, likewise, night after night, sometimes in utter darkness; sometimes with a glimmering lamp; and sometimes, viewing his own face in a looking glass…he this typified constant introspection where with he tortured, but could not purify, himself. (Hawthorne 111) Hawthorne describes the pain in which Dimmesdale puts himself through because of the sin he has committed.

Like the time period, The Scarlet Letter, is repetitive by depicting Dimmesdale’s spiritual anxiety like many other puritans of that period had once exhibited.

Puritans upheld social order and obedience to God in the highest degree, so they created prisons in order to house offenders. Hawthorne describes the prison holding Hester Prynne in the very first chapter, letting readers know that the prison is the center of Puritan Boston. Hawthorne writes; A throng of bearded men, in sad-colored garments and grey, steeple-crowned hats was assembled in front of a wooden edifice, the door of which was heavily timbered with oak, and studded with iron spikes…In accordance with this rule, it may safely be assumed that the forefathers of Boston had built the first prison-house…” (Hawthorne 33)

Hawthorne opens the book by describing the prison and gives reads the feeling that it is important. Similarly, Library of Congress suggests that prisons were important for puritan society. It is written;

They sought to establish an ideal community in America that could act as a model of influence for what they saw as a corrupt civil and religious order in England. This sense of mission was the center of their religious and social identity. Directed toward the realization of such an ideal, the Puritans required a strict moral regulation;

Puritan society considered moral conduct important for not only salvation for themselves, but for others, so if that person chose to sin, a prison could steer them in the right direction. During Puritan times, Puritans greatly feared the devil and things they deemed evil and witch-like. In The Scarlet Letter, Hawthorne writes of a woman called Mistress Hibbins and her frequent visits in the forest with the ‘Black Man,’ who we can assume is the devil.

In conclusion, The Scarlet Letter is repetitive of its time period through Dimmesdale’s state of religious anxiety and self-punishment, puritan punishment, and puritan fear of witchcraft and the devil. This book highly reflects beliefs and actions during the period, and is an accurate representation of how thing operated during that time period. The Scarlet Letter is an honest example of American Puritanism. 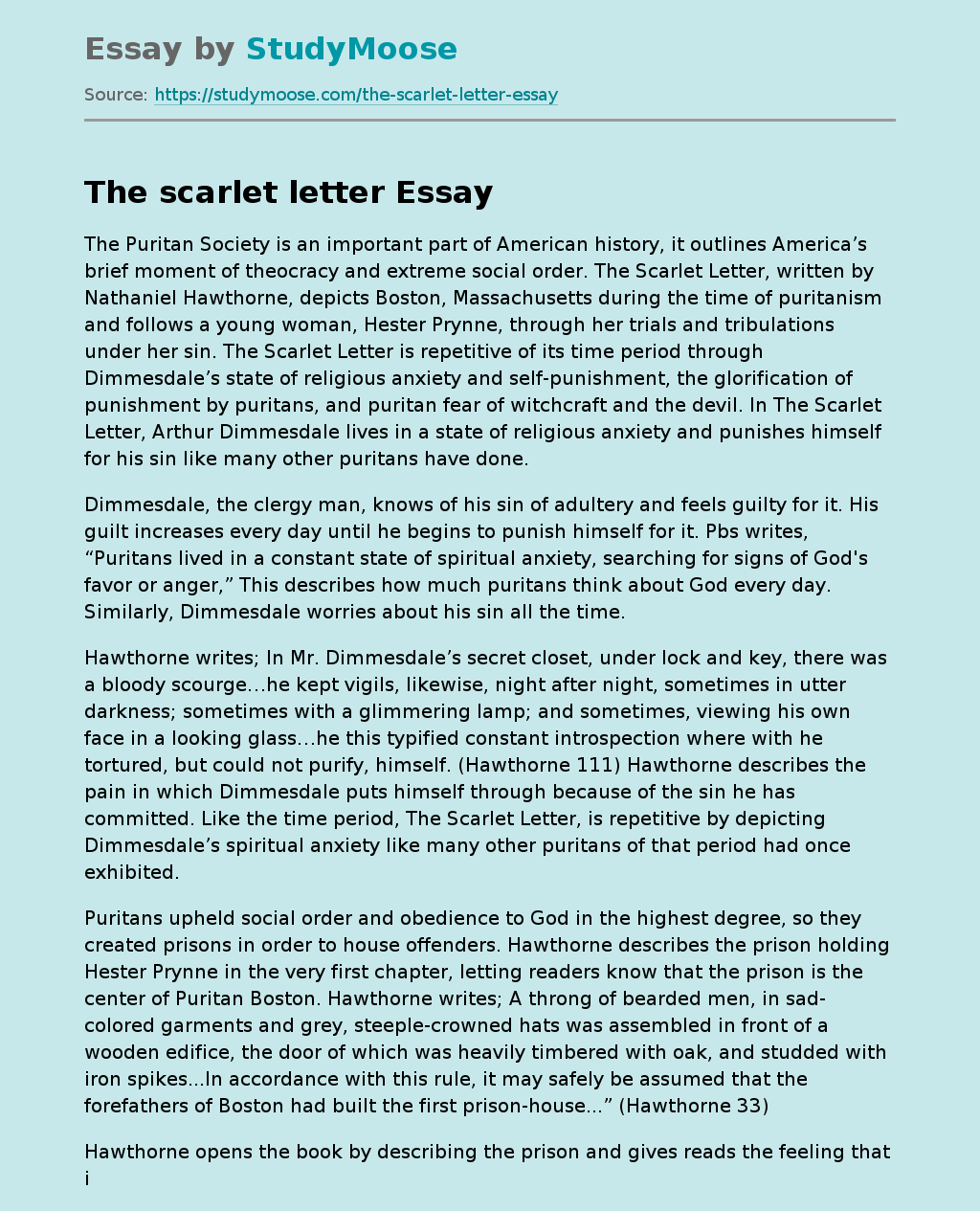