The Heroism Of Hester Prynne

Nathaniel Hawthorne’s The Scarlet Letter focuses on seven years in the lives of four people living in a puritan community in seventeenth century Boston. Hester Prynne, the wife of Roger Chillingworth, falls in love with the Rev. Arthur Dimmesdale and the two have a child, Pearl. The novel explores the effects of adultery on these four characters. Ralph Waldo Emerson once said, “It is the surmounting of difficulties that makes heroes.” A hero has the qualities of loyalty and bravery, and he is always willing to make great sacrifices for the well being of others.

Don't use plagiarized sources. Get your custom essay on
“ The Heroism Of Hester Prynne ”
Get custom paper
NEW! smart matching with writer

Hester Prynne possesses all of the qualities of a true hero in this novel.

These examples establish Hester’s loyalty to others.

Another quality of heroism is bravery. Hester reveals her extreme bravery numerous times throughout the novel. One example of her bravery occurs during the public punishment Hester receives for the crime of adultery. Hester maintains dignity throughout the duration of this punishment. The average person would lose control in a similar situation. Hester is of a rarer quality than the average person. She remains dignified regardless of the insults she receives from the townspeople. Hester also reveals bravery by remaining in the community even though the townspeople treat her cruelly.

Eric Hall Hester moves to the outskirts of town, continues with her needlework, does charity work, and raises her daughter.

A final element of heroism is being willing to make great sacrifices for the well being of others. Hester illustrates this quality when she makes “coarse garments for the poor” population of Boston, despite their insults and ungratefulness. The average person would certainly not do charity work for people who treat them ungratefully. Another example of Hester making sacrifices for others is when she sacrifices her dignity for the welfare of Pearl. This occurs when Hester uses verbal force to barter with the magistrates in her daughter’s behalf. She illustrates the significance of Pearl in her life when Hester says these words to Governor Bellingham, Roger Chillingworth, the Rev. Arthur Dimmesdale, and Rev. Wilson. “Ye shall not take her! I will die first!” This quote reveals the extreme sacrifice that Hester is willing to make for her child. These examples reveal Hester’s willingness to make sacrifices for other people.

Hester Prynne reveals loyalty when she keeps the identities of both Roger Chillingworth and Arthur Dimmesdale secret. Hester illustrates bravery by both being dignified in the first scaffold scene and remaining in Boston despite numerous hardships. Hester proves that she is willing to make sacrifices for others when she does charity work and fights for the welfare of Pearl. Hester Prynne possesses all of the qualities of a true hero in The Scarlet Letter. She is loyal, brave, and willing to make sacrifices for others.

The Heroism Of Hester Prynne. (2016, Jul 15). Retrieved from https://studymoose.com/the-heroism-of-hester-prynne-essay 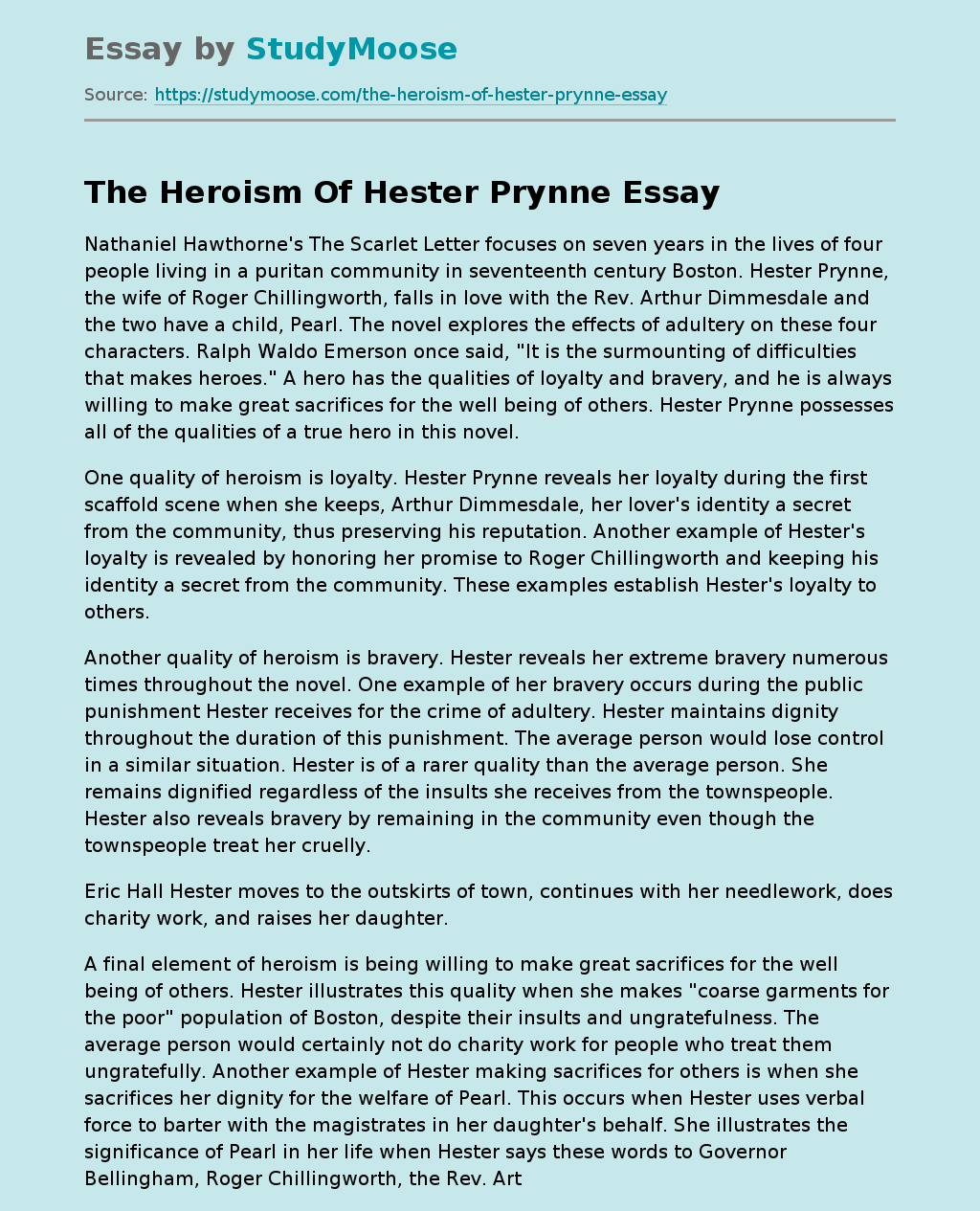