A Dual-Criticism Look at "The Birthmark" by Nathaniel Hawthorne

Literature is many things: provoking, heartwarming, emotional, traumatic, poetic, maybe even life-changing. Literature can also be incredibly ambiguous. While literature can be “simply read”, when one takes a step back and looks at a piece through specific lenses, the work can take on an incredibly different, deeper meaning. Taking the lead of criticisms such as formalist, psychoanalytical, biological, feminist, Marxist, etc., one can dig deeper into a text and discover new meanings and morals from it.

Not only can this confirm obvious written meanings, it can also take a seemingly black and white concept and fill it in with shades of grey, providing new possibilities and interpretations that might conflict, support, or enhance an initial reading.

Turn in your highest-quality paper
Get a qualified writer to help you with
“ A Dual-Criticism Look at “The Birthmark” by Nathaniel Hawthorne ”
Get high-quality paper
NEW! AI matching with writers

For the purposes of delving deeper into multiple possible interpretations, looking at a piece through the lenses of multiple different criticisms can be incredibly helpful. Not only can this give you alternative ways of looking at things, it might also be able to explain subtleties or behavior through a much more concrete understanding.

This concept is especially the case with Nathaniel Hawthorne’s The Birthmark. From an initial reading, The Birthmark seems to be rather clear. There are many elements in play, and all of them have something incredibly important to say. Like most literature, however, the absolute meaning of the story is debatable. There can be many different interpretations of the story: is it propaganda against the advances of science? Is it comparing the power of science with the power or nature? Is it reflecting on the fatal flaws of mankind? Is it a comparison of earth/body versus spirituality/soul? There is no set answer.

However, looking at even just one passage from the points of view from two different types of criticisms, we can find multiple different meanings and morals laved through the action of the story.

The Birthmark follows a brilliant but possibly mad scientist, Aylmer, and his beautiful but cosmetically scarred wife Georgiana. Georgiana is described as being perfect in every way – save for a hideous birthmark in the shape of a hand that mars her otherwise flawless cheek. Aylmer becomes obsessed with this birthmark, being both repulsed by its sight and intrigued as to whether it is curable. Aylmer sets out on a mission to cure his wife of her birthmark, and turns to his science and alchemy to accomplish this task. Georgiana, who never saw much fault with her birthmark before marrying Aylmer, goes along with the plan after seeing how abhorred he was with her birthmark.

Hawthorne spends adequate time setting up the importance of this birthmark. Near the beginning of the story, he writes: Had she been less beautiful, – if Envy’s self could have found aught else to sneer at, – he might have felt his affection heightened by the prettiness of this mimic hand, now vaguely portrayed, now lost, now stealing forth again and glimmering to and fro with every pulse of emotion that throbbed within her heart; but seeing her otherwise so perfect, he found this one defect grow more and more intolerable with every moment of their united lives.

It was the fatal flaw of humanity which Nature, in one shape or another, stamps ineffaceably on all her productions, either to imply that they are temporary and finite, or that their perfection much be wrought by toil and pain. The crimson hand expressed the ineludible gripe in which mortality clutches the highest and purest of earthly mold, degrading them into kindred with the lowest, and even with the very brutes, like whom their visible frames return to dust.

In this manner, selecting it as the symbol of his wife’s liability to sin, sorrow, decay, and death, Aylmer’s somber imagination was not long in rendering the birthmark a frightful object, causing him more trouble and horror than ever Georgiana’s beauty, whether of soul or sense, had given him delight. From an initial reading, this passage seems somewhat cut and dry. Georgiana has birthmark, Aylmer hates said birthmark, and thus Georgiana’s overall beauty is lost on Aylmer. Is there more to this, though? What subtleties might potentially be written into this descriptive passage? What criticism theories can we apply to this passage to enhance our critical thinking?

One of the most popular criticisms used with this piece is that of Feminist Criticism. Feminist Criticism takes literature and underscores it with tones of female repression and abuse, mostly from males, and the general victimization of women versus the overbearing, cruel dominance of men. Even
from a first glance at this passage, one can see that this passage could easily be attacked by feminist critics. Aylmer is obviously in the role of “master” in this story. While he may love Georgiana, his word is law, and what he wants for her is what he executes.

In this passage especially, there is a focus on Georgiana needing to reach an impossibly high standard of perfection to even be considered delightful. It did not matter that she was beautiful. It did not matter that she was kind, compassionate, loving, and loyal. The effects of these positive traits paled in comparison to the negative feelings that even just one tiny blemish brought on. Aylmer cannot focus on anything except Georgiana’s birthmark, even though she is supposedly the epitome of female beauty. All of this doesn’t matter because she fails on only one simple level.

Another way that one can approach this passage is from a psychoanalytical standpoint. Psychoanalytical criticism focuses heavily on Freudian psychology, stating that characters – and sometimes even the author – project their own insecurities and flaws onto other people or situations. With these lenses on, an interpretation can be made that perhaps Aylmer is projecting his own insecurities concerning his own failures onto his bride. Aylmer claims to be a great alchemist, but when we see Aylmer actually perform an experiment, something goes horribly wrong.

Aylmer strives for perfection and glory, but falls short. If he can’t be perfect – why should anyone else get to be? From a psychoanalytical criticism standpoint, Aylmer’s obsession with Georgiana’s “flaw”, and his dedication to purging it, could be seen as Aylmer trying to purify his own failures by projecting them onto Georgiana through her birthmark. If he can remove her flaw, then
surely he could remove his own imperfections.

These two viewpoints approach the same block of text very differently. From a feminist standpoint, Aylmer can be seen as a controlling, abusive husband who holds ridiculously high standards for his wife, standards of perfection that she could not possibly hope to ever reach. This sort of reading leads us to feel sorry for Georgiana and her plight, and to hate Aylmer with a burning passion. In contrast, the psychoanalytical approach sees a much more human side of Aylmer, a side that is uncomfortable in his own insecurities so he projects them on others.

He has trouble coping with his own failures, so he instead obsesses over the “failures” of others. This approach of reading helps one feel more pity for Aylmer, and to perhaps connect with him more on a human level. By taking only two different forms of criticism, we can see two completely different sides of the same character. Should we feel sorry for Georgiana or Aylmer? Is Aylmer’s behavior abusive or abused? From even just these two perspectives, the story and its characters take on a whole new meaning and provide readers with a world full of brand new possibilities.

A Dual-Criticism Look at "The Birthmark" by Nathaniel Hawthorne. (2016, May 01). Retrieved from http://studymoose.com/a-dual-criticism-look-at-the-birthmark-essay 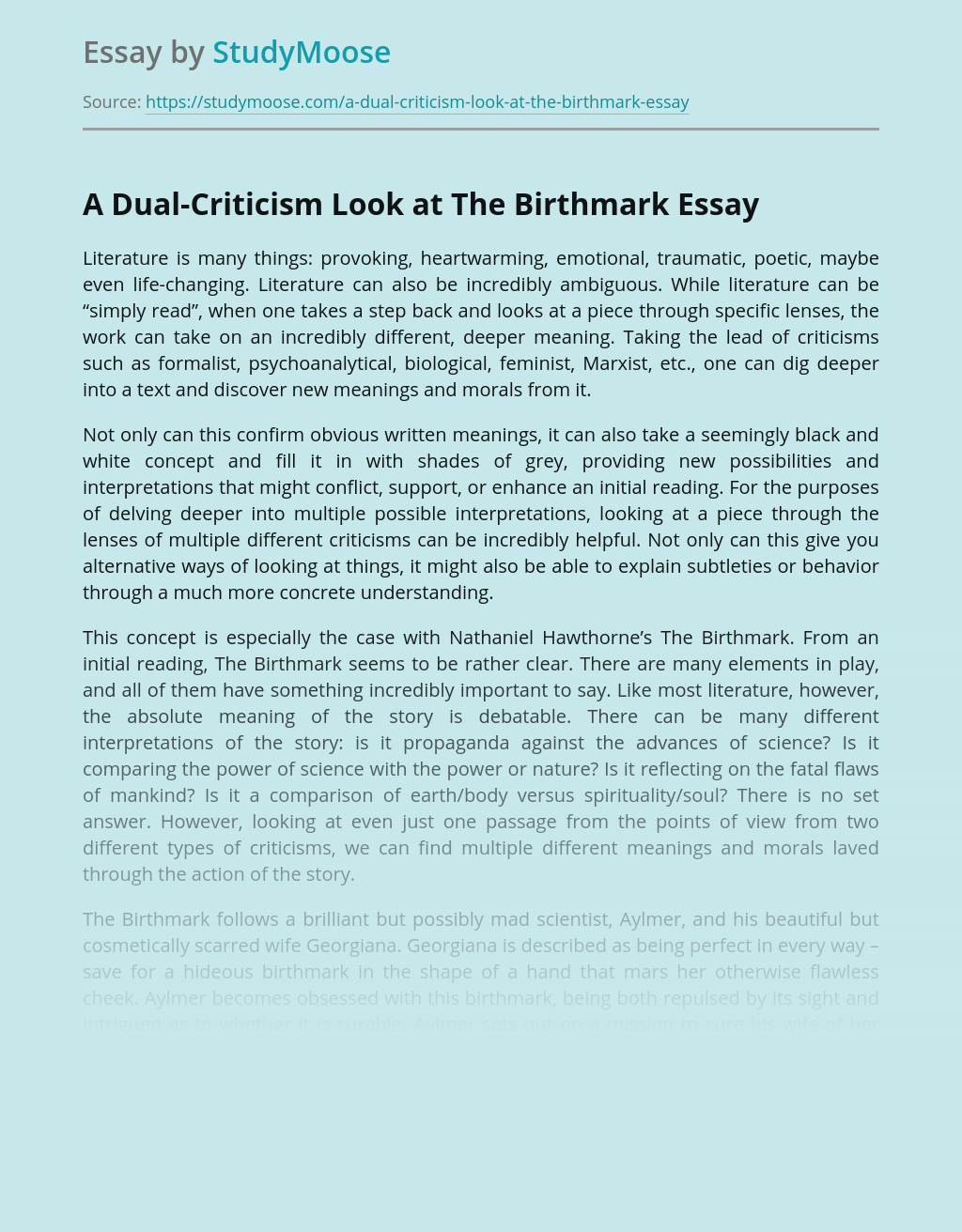 Turn in your highest-quality paper
Get a qualified writer to help you with
“ A Dual-Criticism Look at “The Birthmark” by Nathaniel Hawthorne ”
Get high-quality paper
Helping students since 2015
Stay Safe, Stay Original