Symbolism in Nathaniel Hawthorne's "The Birthmark"

Nathaniel Hawthorne’s The Birthmark is a story wrought with potent symbolism and destructive irony. It is the story of a cerebral scientist’s imprudent and superficial endeavor, and the all too trusting wife that had faith in him. This short story provides us with a moral allegory and theme that is universally vital through symbolism. The crimson hand-shaped mark bestowed upon the otherwise perfect face of a beautiful woman contains much meaning. Through his use of symbolism, Hawthorne addresses the issues of science and manipulation, humanity’s flaws, and mankind’s mortality.

Turn in your highest-quality paper
Get a qualified writer to help you with
“ Symbolism in Nathaniel Hawthorne’s “The Birthmark” ”
Get high-quality paper
NEW! AI matching with writers

The birthmark bequeathed upon Georgiana’s otherwise perfect face symbolizes many things. One of which, is the idea that scientists are infatuated with perfecting nature even while guessing the inevitable consequences. The main characters in the story are a married couple by the names Aylmer and Georgiana. There is no doubt that the two are truly in love, yet, there is a twist to this love story. Georgina is perfect in every way, except for one tiny flaw that Aylmer can’t accept.

“At all the seasons which should have been their happiest, he invariably and without intending it…reverted to this one disastrous topic…it [the mark] became the central point of all…a symbol of imperfection.” (263)

Being a scientist, Aylmer decides that he must find a way to rid Georgiana and himself of the hideous birthmark. Yet, all went wrong; not only did the birthmark fade, but also so did the life within her. Aylmer’s obsession with manipulating nature was the eventual downfall of his true love.

Yet, he did not care about the demise because the power of changing nature had driven him to ignore the fact the there may be consequences.

In addition, the birthmark symbolizes the “fatal flaw” that inevitably exists in the “real world”. Nothing and no one is perfect, yet Aylmer continues to naively dream that he alone can make perfection reality. Moreover, The birthmark represents human’s capacity to be mortal and sin while representing all that is good and profound within a human. The removal of her one flaw ultimately rids Georgiana of the ability to be imperfect and hence mortal. Consequently, she dies. “The fatal hand had grappled with the mystery of life, and was the bond by which an angelic spirit kept itself in union with a mortal frame.” (272)

All that the crimson imperfection symbolizes, Aylmer wants to rid himself of. In it he sees imperfection in himself that he is afraid of facing. Although, other people did not see the birthmark as a flaw but rather a blessing. “Georgiana’s lovers were wont to say that some fairy at her birth hour had laid her tiny hand upon the infant’s cheek, and left this impress there in token of the magic endowments that were to give her such sway over all hearts. Many a desperate swain would have risked life for the privilege of pressing his lips to the mysterious hand.”(262)

Others, however, believed otherwise. “[They] affirmed that the bloody hand, as they chose to call it, quite destroyed the effect of Georgiana’s beauty, and rendered her countenance even hideous.” Yet still this opinion varies from Aylmer’s because he did not think her hideous. Rather, he could not stop concentrating on her only flaw, while he alleged the rest of her to be attractive. Aylmer’s view was more in the middle. ” [Some] contented themselves with wishing it away, that the world might possess one living specimen of ideal loveliness without the semblance of a flaw…Aylmer discovered that this was the case with himself.” (262)

Through his use of symbolism, Hawthorne addresses the issues of science and manipulation, humanity’s flaws, and mankind’s mortality. Moreover, the tale takes us through a love story and shows us how humanity’s flaws can be looked at in numerous ways. It’s the way one reacts to the flaw that ultimately determines its fate.

Symbolism in Nathaniel Hawthorne's "The Birthmark". (2016, Jun 20). Retrieved from http://studymoose.com/symbolism-in-nathaniel-hawthornes-the-birthmark-essay 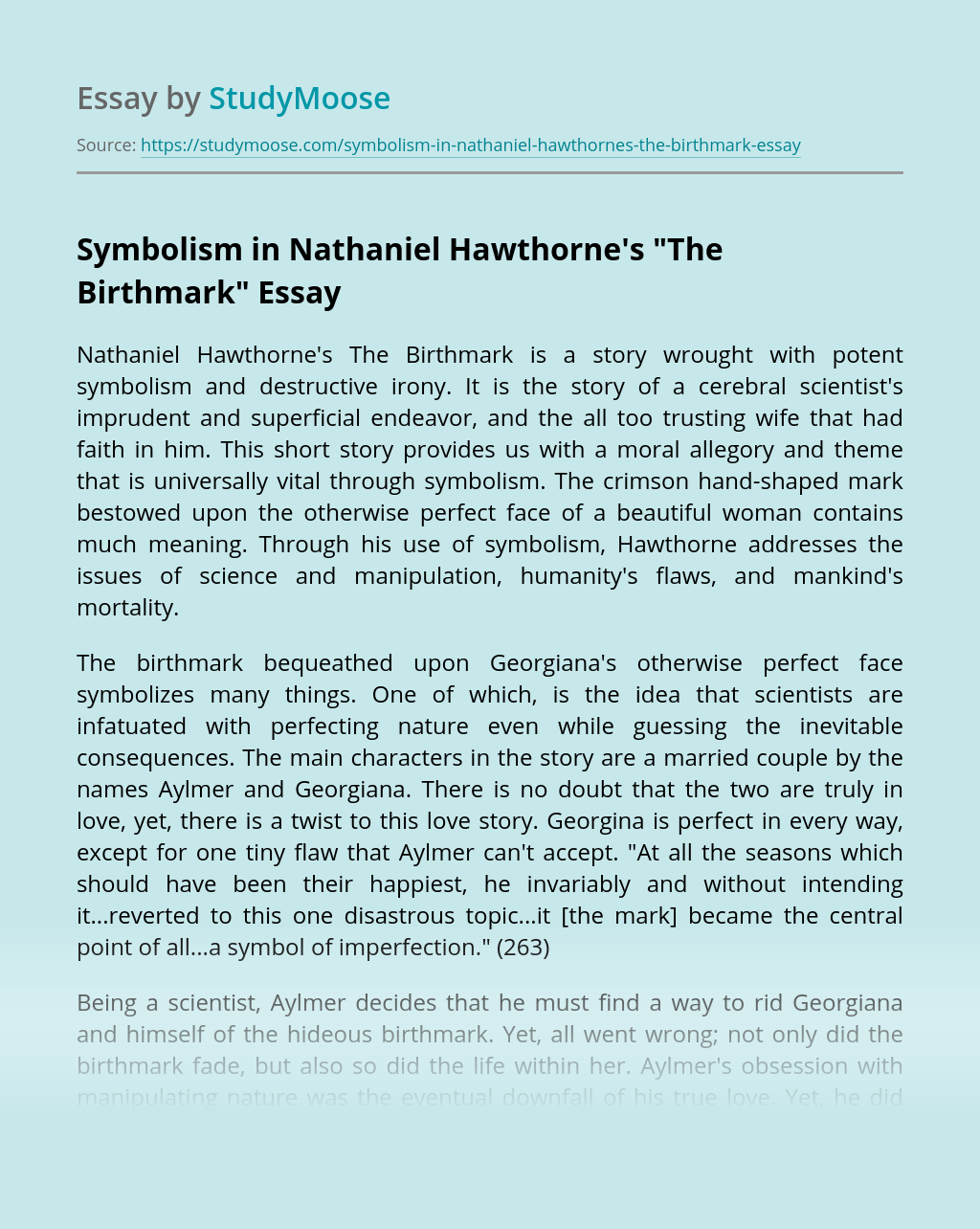 Turn in your highest-quality paper
Get a qualified writer to help you with
“ Symbolism in Nathaniel Hawthorne’s “The Birthmark” ”
Get high-quality paper
Helping students since 2015
Stay Safe, Stay Original