Comparison between Frankenstein and "The Birthmark"

The Industrial Revolution that was happening in the early twilight of the 19th centuries changed the world forever. The introduction of science as a possible cure for all became apparent. Many fascination inventions such as steamboat, cars and electricity were created and the outlook for the future was bright. However, because of this, many scientists turned a blind eye to the dangers of knowledge and unwittingly caused many sorrows in their process to become “god”. Such examples are introduced in the following two stories: Frankenstein and “The birthmark”.

Turn in your highest-quality paper
Get a qualified writer to help you with
“ Comparison between Frankenstein and “The Birthmark” ”
Get high-quality paper
NEW! AI matching with writer

In both stories, the author created a character that was to symbolize the scientists of the early 19th centuries who believed that anything was possible with science. In “The Birthmark”, Hawthorne’s character Aylmer tries to remove his wife’s birthmark with his use of science but ends up killing her. While in Frankenstein, the protagonist Victor attempts to use science to create life but ends up destroying those there were closest to him.

There are many similarities between the two stories, especially between the characteristics of Victor Frankenstein and Aylmer. Both men have a deep passion and love for science that borders on obsession. One of the prevalent themes in both stories is the danger of playing god. In Frankenstein, Victor attempts to go beyond accepted human limits and access the knowledge of life and therefore becoming godlike. The story begins with Walton’s letter to his sister. From the letter, we are introduced to the danger of science. Victor tells Walton, “You seek for knowledge and wisdom, as I once did; and I ardently hope that the gratification of your wishes may not be a serpent to sting you, as mine has been.

The theme of destructive knowledge is then developed further throughout the story as the tragic events and consequences of Victor’s obsession for life is unfold. He cuts himself off from the world and eventually commits himself entirely to his task, “while I pursued my undertaking with unremitting ardour, my cheek has grown pale with study and my person has become emaciated with confinement.” (pg 55) This is similar to what Aylmer went through, “He was pale as death, anxious and absorbed, and hung over the furnace as if it depended upon his utmost watchfulness… or misery. (pg 70) He was so obsessed about perfection that he forsakes the consequences of his action.

Throughout Frankenstein, Victor repeatedly convinced himself that what he is doing is absolutely right and because of this, his fall from grace mirrors those of Aylmer. Both of them have unrealistic goals to achieve and both unintentionally destroy those that are precious to them.

For all their similarities, Dr. Frankenstein and Aylmer are still significantly different characters. Victor wants to be god but does not know what to do with the power, “When I found so astonishing a power placed within my hands, I hesitated a long time concerning the manner in which I should employ it.” (pg 54) Victor views science as the path to new knowledge: “in other studies you go as far as others have gone before you… but in scientific pursuit, there is continual food for discovery and wonder.”(pg 52)

While Aylmer views science as the path to greater power, “We know Aylmer possessed this degree of faith in man’s ultimate control over nature.”(pg 59) He tries to play god in order to bend the laws of nature and make imperfection to perfection, “I feel myself fully competent to render this dear cheek as faultless… and then, most beloved, what will be my triumph when I shall have corrected what Nature left imperfect in her fairest work!” (pg 63) In the end however, it was nature that got the last laugh when the potion that Aylmer gave Georgiana resulted in her death.

Both Frankenstein and Aylmer are victims of the destructive fascination for science and nature. Both men try to transcend to godhood and, ultimately, both fail. Perhaps, that is why both Shelley and Hawthorne wrote similar stories in an attempt to illustrate the danger of ambition, science and godhood.

Comparison between Frankenstein and "The Birthmark". (2016, Jul 27). Retrieved from https://studymoose.com/comparison-between-frankenstein-and-the-birthmark-essay 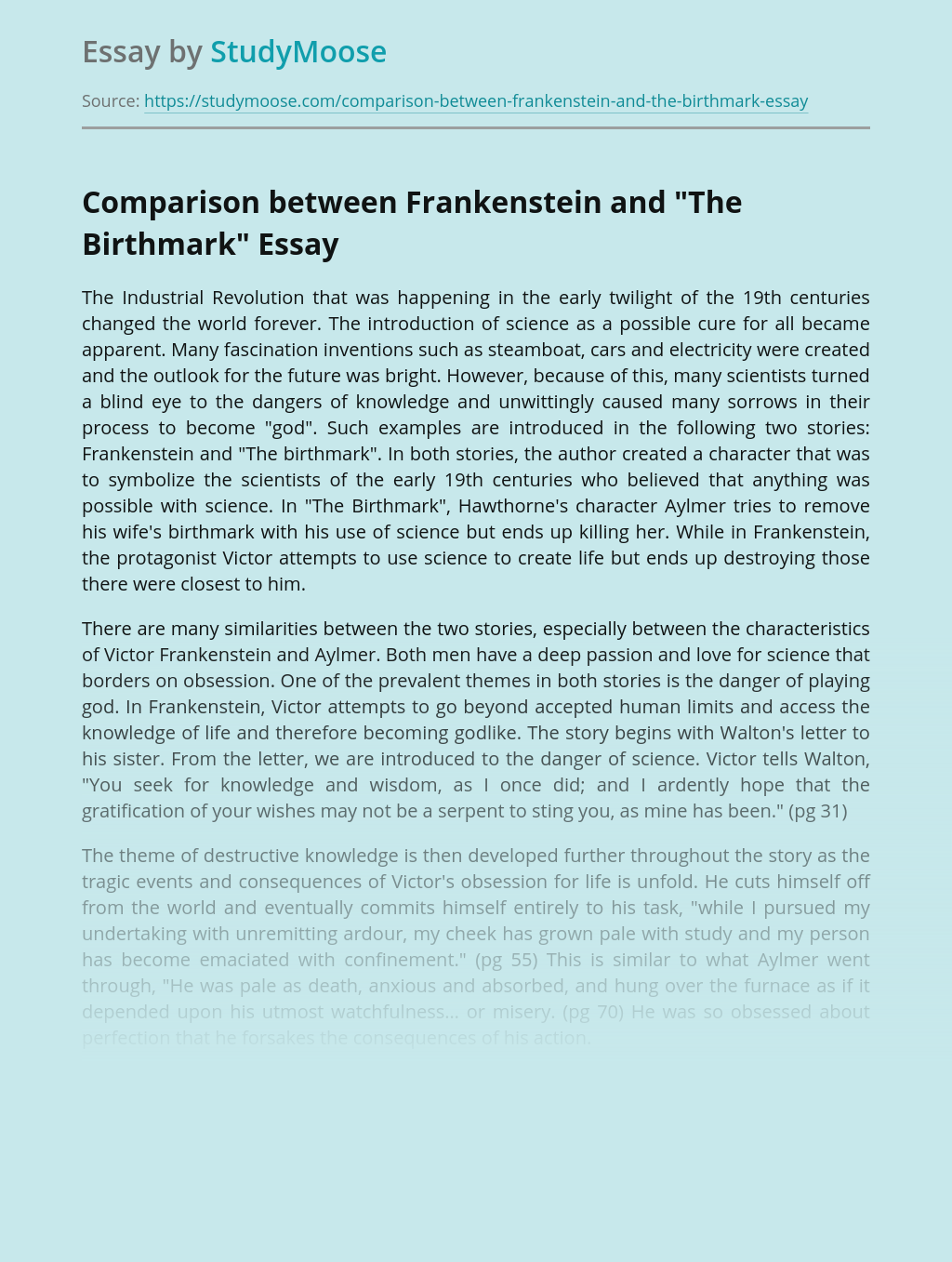 Turn in your highest-quality paper
Get a qualified writer to help you with
“ Comparison between Frankenstein and “The Birthmark” ”
Get high-quality paper
Helping students since 2015
Stay Safe, Stay Original