Mirror Imagery in The Scarlet Letter by Nathaniel Hawthorne

According to research in the field of psychology, guilt manifests itself in many ways. Often those who feel guilty see assurances for their feeling in the action of others—even when the public has no interest in his or her private life. In a conservative society, however, rules are imposed upon him or her, barring the person from moving ahead with their life, no matter how insignificant the crime. Michael L. Lasser takes a similar approach, arguing that Pearl is a mirror image of Hesters guilt—a constant reminder of her mistake.

Turn in your highest-quality paper
Get a qualified writer to help you with
“ Mirror Imagery in The Scarlet Letter by Nathaniel Hawthorne ”
Get high-quality paper
NEW! AI matching with writers

Lassers argument has merit because Hawthorne not only uses mirror imagery in relation to Hesters guilt, but also in regards the emotions of all characters.

In Mirror Imagery in The Scarlet Letter, Michael Lasser argues that Hawthorne uses mirror imagery to reveal a characters innermost secrets and ulterior motives. The child Pearl is described as, the scarlet letter in another form; the scarlet letter endowed with life! Having made this statement, he explains his argument through Hesters impressions of Pearls eyes—full of smiling malice.

When Hester and Pearl visit the governors mansion, Hester notices a look of naughty merriment in the little girls eyes. Hawthorne also mentions a fiend that occasionally peeps out of Pearls eyes.

Through his description of Hesters impression of the evil that lurks within Pearl, Lasser comments on the notion that Pearl is evil by using the Puritan statement that no good comes from evil. Since Pearl is illegitimate and the result of an act of sin—the ultimate Puritan evil—she is seen as evil as well.

Lasser argues that Hawthorne uses similar mirror imagery techniques with Dimmesdale and Chillingworth as he does with Hester. In his final moments, Dimmesdale holds a private vigil by his mirror in which he sees diabolical shapes—representing Dimmesdales untold sin—angels, and finally Hester and Pearl. The description the soul beheld its features in the mirror of the passing moment compares time to a mirror and the soul contemplating its past as the image that appears on the mirror. On the other hand, Chillingworth is a reflection of his own malevolence. His warped body represents his inner ill will—his desire to torture Dimmesdale. Hawthorne further describes Chillingworths eyes, saying, Sometimes a light glimmered out of the physician’s eyes, burning blue and ominous, like the reflection of a furnace, or, let us say, like one of those gleams of ghastly fire that darted from Bunyan’s awful doorway in the hillside, and quivered on the pilgrim’s face. Chillingworths eyes are used as a reflection of his evil—the ghastly fire that lives within him. Lasser concludes that Hawthorne uses such imagery to imply certain views upon a reader, leaving the reader to carry this suggestion throughout the story.

If we look closely at the reactions Hester sees in her child, we can see the characteristics of a guilt-ridden mind. People are constantly judging me and their judgment is important to me is how someone psychologically bothered by his or her guilt would think. This perception of continuous judgment is very obvious with Hesters reaction seeing even her child demonstrating accusations in various forms. A child does not know how to be polite and socially appropriate when speaking. Such habits come from years of training. Often maturity is judged by the tolerance one develops towards others mistakes. Even her normal reaction of trying to play with her own reflection in water is described with reference to a mirror.

The picturesque detail found in the sentence Here and there, she came to a full stop, and peeped curiously into a pool, left by the retiring tide as a mirror for Pearl to see her face in ties in the mirror as one of the objects connected with the story in readers mind. The brook itself is a mirror of Pearl. Hawthorne describes the brook as, [Gushing] from a well-spring as mysterious, and had flowed through scenes shadowed as heavily with gloom. Pearl, like the brook, springs from an unknown source—her mysterious parentage—and flows through a world filled with gloom and guilt.

In addition to making explicit references to mirror and reflections of images, there are many instances where mirror is implied. For example, whenever Hester suffers Pearls playful acts, it is her inner turmoil that is mirrored in the acts of the child. Hester views her child as the product of a crime and, therefore, an evil entity; this is no surprise knowing the ideas that existed in a puritanical society wherein they saw the child as an extension of his or her parents characteristics. Thus the societys ideas are reflected and perpetuated by even those who are victims.

Since such behavior has not been eradicated even in the current, modern society, it is only natural to expect a puritanical society to have brainwashed Hester to feel guilt towards her childs actions. One day, as her mother stooped over the cradle, the infant’s eyes had been caught by the glimmering of the gold embroidery about the letter; and, putting up her little hand, she grasped at it, smiling, not doubtfully, but with a decided gleam that gave her face the look of a much older child. Then, gasping for breath, did Hester Prynne clutch the fatal token, instinctively endeavoring to tear it away; so infinite was the torture inflicted by the intelligent touch of Pearl’s baby-hand. By describing Pearls intuitive grasp of Hesters guilt—her letter A— Hawthorne enforces Pearls role as a mirror of Hesters conscience.

My imagination was a tarnished mirror, says Nathaniel Hawthorne in his introduction to Scarlet Letter. Michael Lasser picks out such references throughout and shows us the writers mastery in making mirrors an important symbolic artifact, be it the shiny breastplate that magnifies the letter A on Hesters chest or the brook that reflects shadowy and intangible qualities of the characters of this story.

Mirror Imagery in The Scarlet Letter by Nathaniel Hawthorne. (2016, Jul 31). Retrieved from http://studymoose.com/mirror-imagery-in-the-scarlet-letter-by-nathaniel-hawthorne-essay 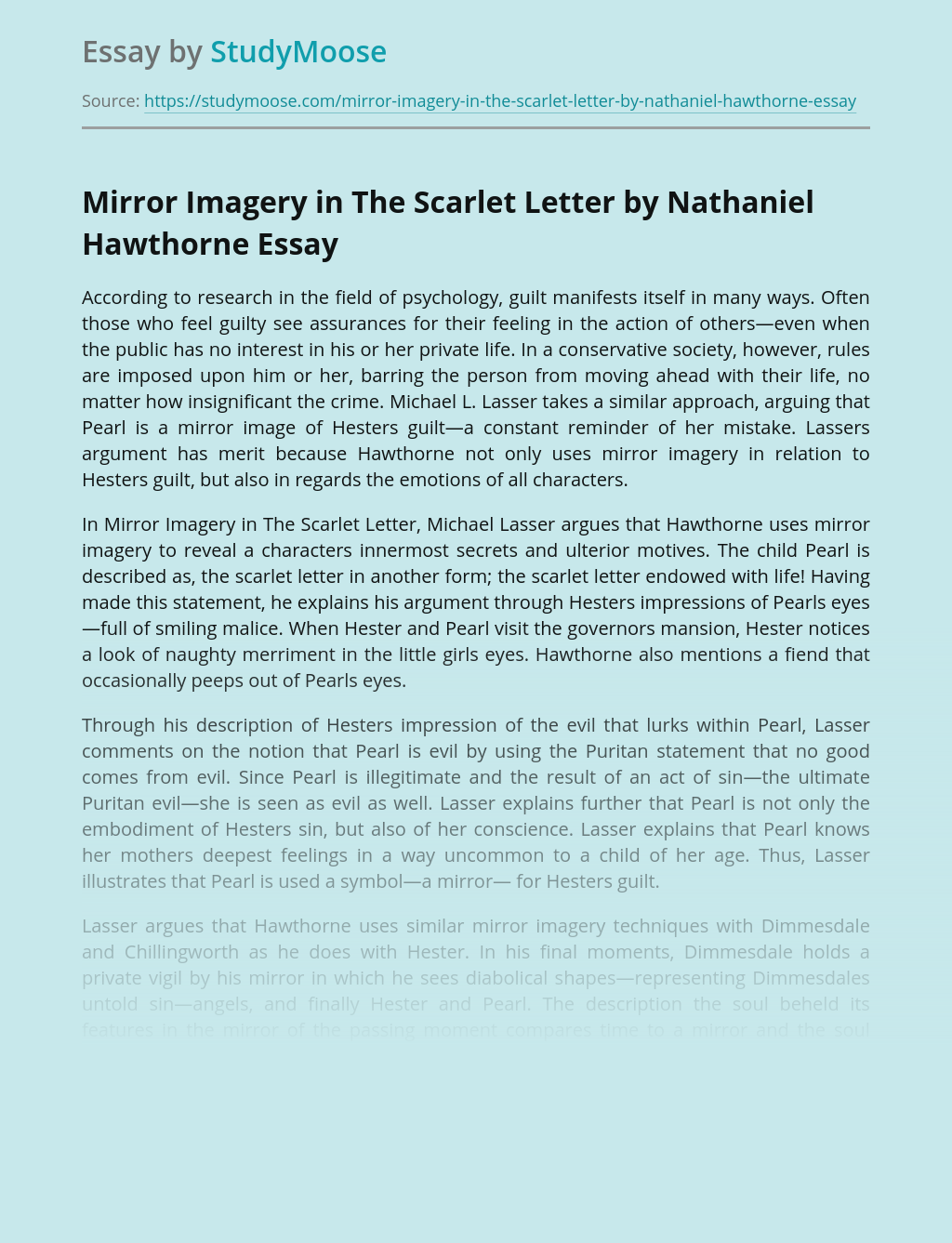 Turn in your highest-quality paper
Get a qualified writer to help you with
“ Mirror Imagery in The Scarlet Letter by Nathaniel Hawthorne ”
Get high-quality paper
Helping students since 2015
Stay Safe, Stay Original