Revenge is the defining theme in Nathaniel Hawthorne’s The Scarlet Letter. It is the driving force behind the actions of the main antagonist Roger Chillingworth. In the novel his obsession for revenge is seen as an uncontrollable desire that consumes the character. Chillingworth told his wife, Hester Prynne, that he would find the adulterer and have him punished. He wanted Hester’s partner to suffer the same humiliation she had to endure. Chillingworth wanted him to stand on the scaffold for three hours, wearing a letter “A” and become an outcast of the community.

He witnessed the suffering of his wife and wanted the same for the man. He also made it clear to his wife that he will not take revenge on her or her newborn child. His revenge and hatred was saved solely for the man that defiled his wife.

When Hester refuses to reveal the name of Pearl’s father Chillingworth promises to “destroy that man’s soul.

” Roger Chillingworth uses his profession as the town doctor to discover the identity of Hester’s lover. He is called upon to attend the very sick Reverend Dimmesdale. Chillingworth discovers that Dimmesdale’s ailments are a direct result of his inner guilt and correctly deduces that he is the man who impregnated his wife. When Chillingworth makes this discovery something inside of him changes. He evolves from an angry spiteful person into a madman. He becomes obsessed with torturing Dimmesdale. Instead of treating his patient in an attempt to heal him, he inflicts more guilt and suffering.

Chillingworth becomes good friends with Dimmesdale and moves into his house so he can remain close and torment him. Chillingworth causes misery by discussing secrets, and their power, which increases the painful guilt he has for his own sin.

He makes it his sole purpose to torment Reverend Dimmesdale “Not the less, he shall be mine.” (Hawthorne 78) The physical effects of revenge begin to change Chillingworth as well, his deformed shoulders become even more deformed, his face ages, and his wrinkles deepen. Revenge finally destroys Chillingworth when Dimmesdale decides to leave for Europe with Hester and Pearl. Chillingworth desperately tries to persuade him to stay by stating that leaving with Hester would taint his honor.

When this plot fails he buys passage on the ship so he could remain close and continue his persecution. Dimmesdale, finally consumed by his guilt, confesses his great sin in front of the community and then suddenly dies of heart failure. Chillingworth had spent the last few years of his life obsessed with torturing Reverend Dimmesdale. As a result Chillingworth loses his reason for living and dies one year later. Chillingworth is a prime example of how revenge can fully consume a person’s mind and body. Instead of feeling satisfaction from Dimmesdale’s suffering and death, he is filled with emptiness and a desolate soul. In the end revenge killed one man and destroyed the other. 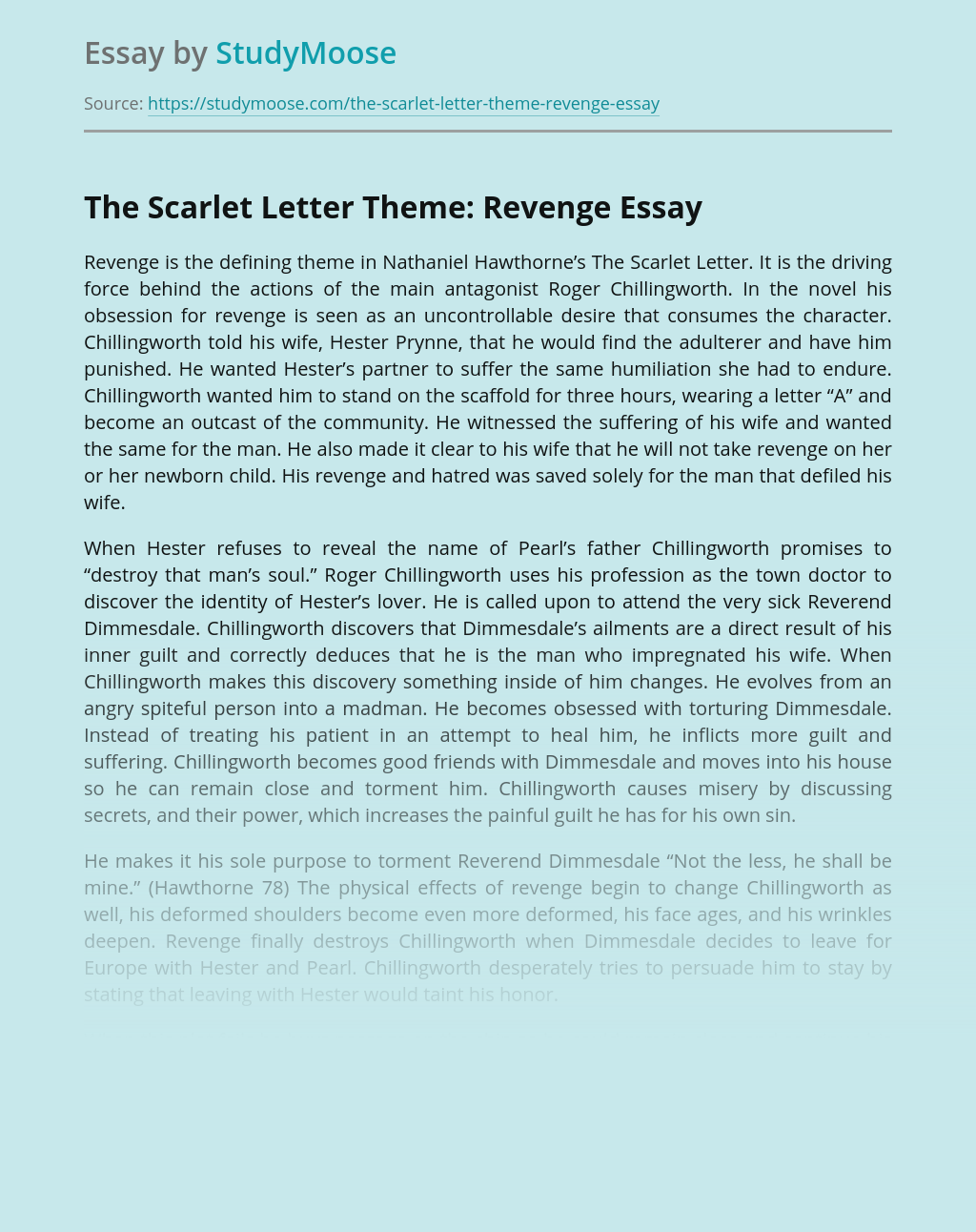