The Immortal Life of Henrietta Lacks

1. “This is a work of non-fiction. No names have been changed, no characters invented, no event fabricated. While writing this book, I conducted more than a thousand hours of interviews with family and friends of Henrietta Lacks, as well as with lawyers, ethicists, scientists, and journalists who’ve written about the Lacks family. I relied on extensive archival photos and documents, scientific and historical research, and the personal journals of Henrietta’s daughter, Deborah Lacks.” (page xiii) This passage shows the writer’s credibility by reassuring the authentication of the book itself.

Don't use plagiarized sources. Get your custom essay on
“ The Immortal Life of Henrietta Lacks ”
Get custom paper
NEW! smart matching with writer

She states her sources of information and explains her research thoroughly which gives the reader a feeling of confidence that what their reading is genuine.

2. “Her real name is Henrietta Lacks. I’ve spent years staring at that photo, wondering what kind of life she led, what happened to her children, and what she’d think about cells from her cervix living on forever—bought, sold, packaged, and shipped by the trillions to laboratories around the world.

” (Prologue, page 1) This passage shows the writer’s empathy for the circumstance. She put herself in Henrietta’s shoes and tried to imagine her emotions and reactions. She tries to grasp a better understanding if this unjustifiable occurrence by learning from Henrietta’s story and her family. She said on page 7, “The Lackses challenged everything I thought I knew about faith, science, journalism, and race. Ultimately, this book is the result. It’s not only the story of HeLa cells and Henrietta Lacks, but of Henrietta’s family—particularly Deborah—and their lifelong struggle to make peace with the existence of those cells, and the science that made them possible.

3. “Her cells were part of research into the genes that cause cancer and those that suppress it; they helped develop drugs for treating herpes, leukemia, influenza, hemophilia, and Parkinson’s disease; and they’ve been used to study lactose digestion, sexually transmitted diseases, appendicitis, human longevity, mosquito mating, and the negative cellular effects of working in sewers.” (Prologue, page 4) This passage shows that the writer is a qualified speaker by displaying her knowledge on the subject. She is very informative and proves that she had in-fact done an abundance of research of the history of HeLa cells.

Question: What is the Occasion?
Why did the author choose to write this text at this time?

Answer: This is a quote directly from Rebecca Skloot herself from her website explaining why she decided to write this book. “The prologue of the book tells the story of how I learned about Henrietta’s cells for the first time when I was sixteen, but it doesn’t really go into why that story grabbed me to the extent that it did. I think that’s because it wasn’t until after the book was published that I began to understand why the story had such an impact on me. When I first learned about Henrietta’s cells in Mr. Defler’s biology class, the first questions I asked him were whether she had any children, what they thought about Henrietta’s cells living on all these years after her death, and what did the fact that she was black have to do with it all? I realize now that my questions weren’t obvious ones for a sixteen-year-old to ask, but something was happening in my life that I think primed me to ask questions about the cells. That same year, my father had gotten sick with a mysterious illness no one was able to diagnose.

He’d gone from being my very active and athletic dad to being a man who had problems thinking, and he spent all of his time lying in our living room because he couldn’t walk. It turned out that a virus had caused brain damage, and he eventually enrolled in an experimental drug study. Since he couldn’t operate a car, I drove him to and from the hospital several times a week and sat with him and many other patients as they got experimental treatments. So I was in the midst of watching my own father go through research and was experiencing the hopes that can come from science, but also the frustration and fear. It was a frightening time, the research didn’t help him, and in the end the study was dissolved without fulfilling promises it made to the patients about access to treatment.

The experience really taught me about the wonder and hope of science, but also the complicated and sometimes painful ways it can affect people’s lives. I was in the middle of that experience when my teacher mentioned that Henrietta’s cells had been growing in labs decades after her death. So I asked the questions I did because I was a kid wrestling with watching my own father being used as a research subject. But I couldn’t shake the questions Henrietta’s cells raised in my mind, and nearly a decade later when I took my first writing class, my curious obsession with Henrietta was the first thing I wrote about.” (Skloot FAQ)

Question: Who is the Audience?

I don’t believe that this book has primarily one audience. It is a story of humanity and the effects sickness can have on a family. Anyone who has gone through loss can relate to the topics in this book. This book is really for anyone who is mature enough to handle the content in this book, although it may appeal more to those who are interested in science and biology.

Choose a quote that establishes the intended audience and give an explanation as to how the quote helps to establish audience. 1. “I had a vision of my target audience: The spectrum ran from someone who hadn’t finished high school to Nobel-winning chemists! I was actively trying to write for this huge range of people and felt—still feel—that doing so was just as important for Nobel winners as for the general public.” (Skloot FAQ)

Question: What is the Purpose?

Answer: The purpose of this book is to inform readers about Henrietta Lacks, the woman behind the immortal cells. Skloot’s purpose was to inform readers of where the scientifically famous HeLa cells came from. “Did she know how important her cells were? Did she have any children?” (Prologue, page 4) These are all questions Skloot had after her teacher, Mr. Defler, reassured her that “no one knows anything about her.” (Prologue page 4) Skloot could not settle with this answer. It puzzled her that someone so important to mankind is just known as four letters. As Skloot continued to study Biology in high school and college, the “HeLa cells were always omnipresent.” (Prologue page 4)

However, Mr. Defler was the only one to “mention Henrietta.” (Prologue page 4) From there, Skloot committed herself to writing a book that would tell of the person Henrietta was before she was an immortal vial in a laboratory. Skloot’s purpose was to tell a story “of both the cells and the woman they came from.” (Prologue page 6) Are the purpose and occasion similar or different in this piece? Explain your reasoning. The Purpose and Occasion are similar because she, on a personal level, understood and comprehended the feeling of pain and the feeling of helplessness that Henrietta’s children went through.

Question: What is the Subject?

Answer: The subject of the story, Henrietta’s life, is told through a timeline. The timeline appears at the top of every chapter as the author skips between the past and the present. She tells stories of how she gained information on Henrietta, and then states the information itself. Pick 3 subjects the author writes about and create a sentence dealing with that particular subject that helps reveal possible themes for the novel. 1. Cootie, Henrietta’s first cousin, contracted polio and was only treated because he had somewhat light skin. (Racism) 2. Fred came back to help his family out by giving Henrietta and her family all of his money. (family) 3. How far should doctors and scientists be allowed to go for the sake of research? Is it acceptable for patients to be used for research without their knowledge or consent? (morality and ethics)

For each tone, find one quote from the text that illustrates the tone. 1. “Another scientist calculated that if you could lay all HeLa cells ever grown end-to-end, they’d wrap around the Earth at least three times, spanning more than 350 million feet. In her prime, Henrietta herself stood only a bit over five feet tall.” (Prologue, page 2) 2. “Then, matter-of-factly, almost as an afterthought, he said, “She was a black woman.” He erased her name in one fast swipe and blew the chalk from his hands. Class was over. As the other students filed out of the room, I sat thinking, that’s it? That’s all we get? There has to be more to the story. I followed Defler to his office. “Where was she from?” I asked. “Did she know how important her cells were? Did she have any children?” “I wish I could tell you,” he said, “but no one knows anything about her.”

After class, I ran home and threw myself onto my bed with my biology textbook. I looked up “cell culture” in the index, and there she was, a small parenthetical…” (Prologue, page 4) 3. “I became fixated on the idea of someday telling Henrietta’s story. At one point I even called directory assistance in Baltimore looking for Henrietta’s husband, David Lacks, but he wasn’t listed. I had the idea that I’d write a book that was a biography of both the cells and the woman they came from—someone’s daughter, wife, and mother.” (Prologue, page 6)

Explain how the tone effects the effectiveness of each passage. The tone of the author’s writing was informative, inquisitive and passionate. Skloot informs her audience in a professional manner, but the connotation of her words shows her passion for the subject. Her inquisitive nature shows in the way she dares to question the unknown and pushes past the boundaries of mere science and facts and into something deeper, into something unidentified. She proves that HeLa cells are just a minuscule part of Henrietta’s life. She shows that before the tumor devoured Henrietta’s body, she was a person, with a life, a family, and a story.

The Immortal Life of Henrietta Lacks. (2016, Jun 03). Retrieved from http://studymoose.com/the-immortal-life-of-henrietta-lacks-essay 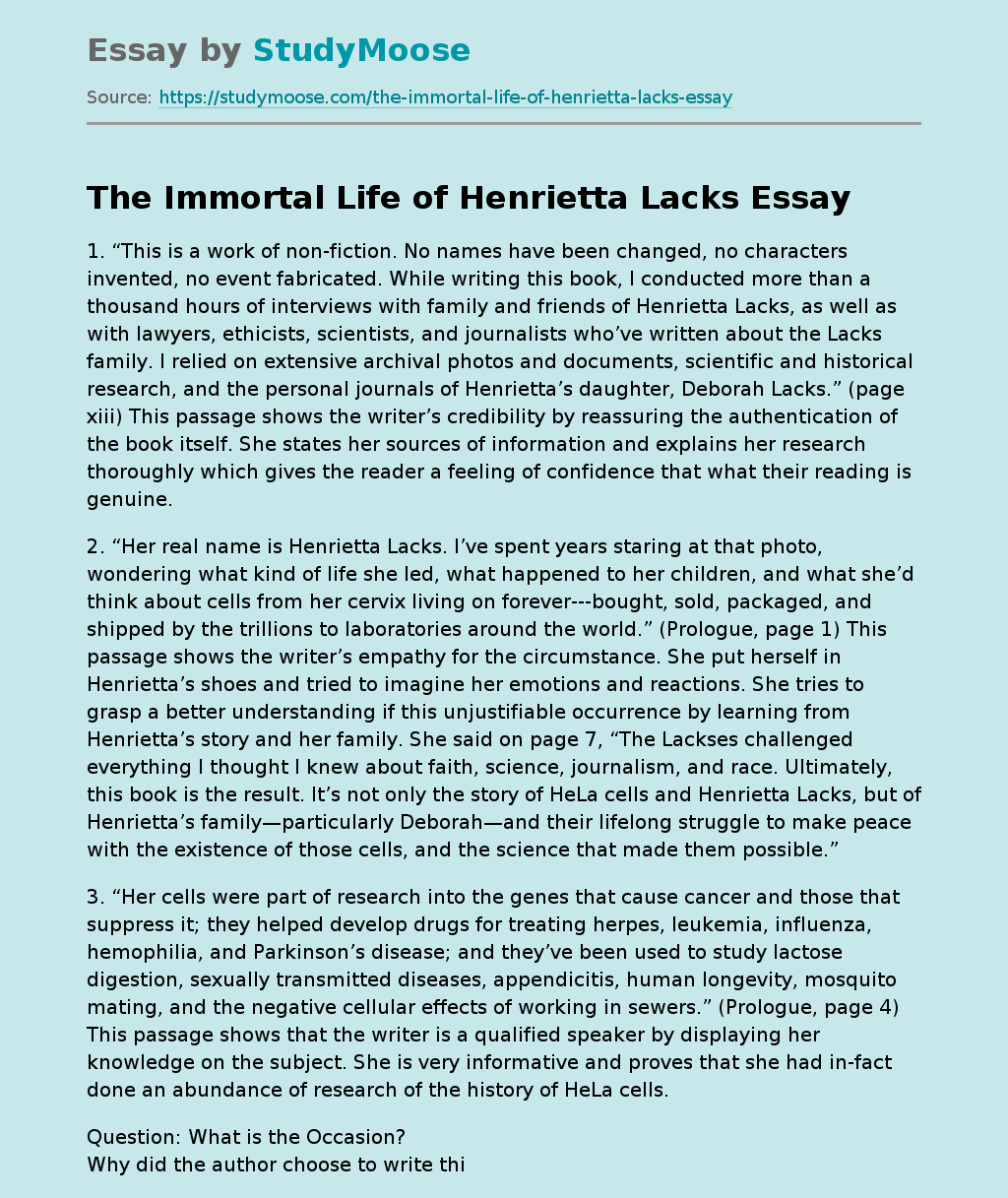