Today there are many different opinions in the society about if getting married or stay single. Men and women can choose in the way they prefer to live because nowadays is very common the concept of being married and still being single due to people leaving together without any attachment other than share the same house . The truth is that simplest things such as companionship, responsibility and lifestyle change when you marry that special person in your life.

Firstly, companionship is the first difference between single and married life.

Single people would spend their time mostly by themselves, without anybody to share how they have been during the day or how they have been feeling. In contrast, married people know that when they get home their partner is going to be there willing to listen to their problems and to make them feel better. Also when being single the only concern would be about their personal interests when making a choice, but this comes along without emotional and physical support in the hard moments.

While being married the decisions involve both people in the relationship, making difficult things easier to bear. Thinking about the future is another big contrast included in companionships, due to single people not being ready to think about children or start a family. Married people make plans in long term. They agreed in when is the right moment to bring children to this world, just depending in the economic situation.

Secondly, responsibility in another distinct difference between people who remain single and people who choose to get married.

Single people don’t have to worry about managing their time when doing the daily activities or going to school full time. This will be easier for them than people who have someone depending on them. Married people need to put an extra effort to achieve a career while raising their children and taking care of their husband or wife. As an advantage, single people don’t have to pay bills and expenses other than their own, but sometimes this is bad because they carry all the responsibilities by themselves. On the other hand, married people have the support of their partners with all the regular expenses such as clothes, rent and food. Single people also have more time to go out with friends and socialize doing things like going to the gym and shopping. While, married people have to plan the same activities with more time because their schedule is more complicated.

Finally, lifestyle which is a significant difference present in single people and married people. Single people enjoy eating whatever they want because there is nobody telling them it is healthy or not. If they cook there is no need to worry about what the other person likes. However, married people most of the time exchange ideas in food. They also establish an appropriate hour that fits everybody in the family to eat together. Changes in sleeping habits are very notable when switching from a single life to a married life. Before getting married, a convenient time to go to sleep is set and to change bedsides is more comfortable . In contrast, after being married is common to have an specific time to go to bed, mostly in company of your spouse, turning those moment in great memories.

Clearly, the statute of being single or married is an important decision that change people lives depending in how they prefer to live and how happy they want to be or even if they prefer to have children or don’t. 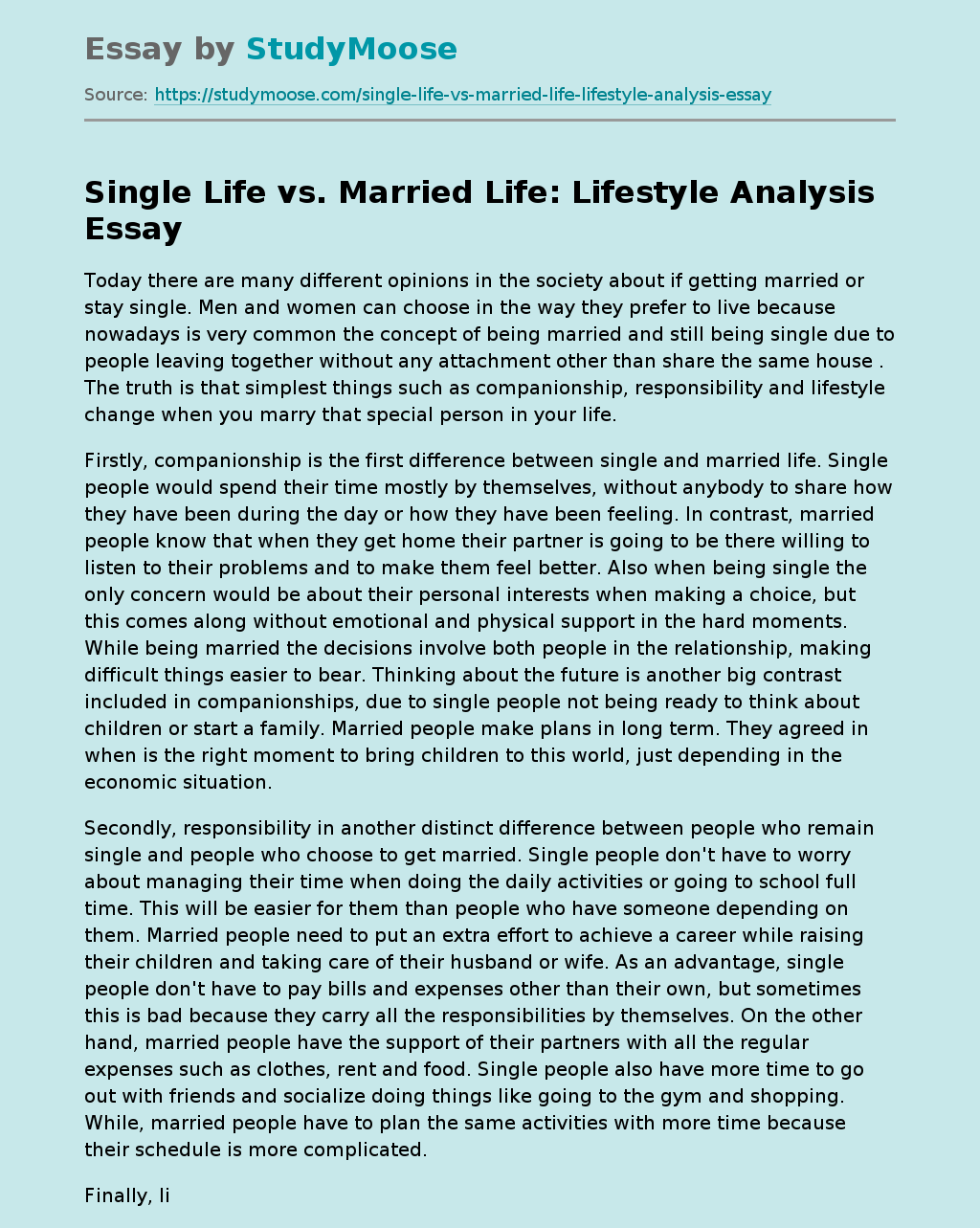