“Washington’s Farewell Address” was a letter that stressed unity, patriotism, independence, and the milestones the United States accomplished. However, the American people felt about the announcement of his retirement, Washington stressed the importance of unity, independence, and liberty.

Within in his farewell address, he gave the American people a few reminders such as not to split into political parties, not to be divided by geographical location, and to stay away from foreign affairs. While reading “Washington’s Farewell Address”, a reader can see the use of timing, rhetorical devices, and his appeals to logos, pathos, and ethos to reinsure a sense of unity and patriotism to the American people while delivering warning messages.

While analyzing the arguments and messages, I noticed Washington chose specific timing to introduce the specific warning that made up the majority of his “Farewell Address”.

“Washington’s Farewell Address” was written in 1796, this was a time period where the American Revolution defined the newly founded nation and the commencement of the United States. The United States of America was carving out its place in the world and was being led by a public figure who was loved and respected among Americans. Washington was the role model for Americans and took on the role of the father of the United States. While analyzing his speech, he referred to himself as a “parting friend” and “an old and affectionate friend”. “Washington’s Farewell Address” was purposely written and circulated at a time where his popularity called for him to serve another term as president. As a result of his farewell address being circulated at his heightened sense of popularity, it was assumed that Americans would pay close attention to his last message.

While Americans were told this would be his farewell address, this helped the nation become more willing to listen and accept his farewell address. I believe if Washington had written the essay earlier on the nation would have not clung to his words. So, if Washington waited, there would be a new commander-in-chief and he would lose ethos, which would seem less important and more removed than while he was still president. Washington’s timing created a calculating move and he chose the best time to convey his message and used his farewell address as the best delivery method to explain his important message.

Washington used quite a few rhetorical devices to help capture the attention of the nation. He uses personal pronouns, descriptive adjectives, and allusions to strengthen the idea of an independent America. The first rhetorical device used was the abundance of personal pronouns such as: I, me, you, your, we, our, and us. The personal pronouns used for various reasons such as: to show Washington’s personal views and help the nation humanize him which helps close the gap between the president and citizens; to connect with Washington’s audience so they are able to relate to and personalize the argument Washington was making; to create a group mentality, and building a feeling of shared ownership and empowerment.

The second rhetorical device used was descriptive adjectives to help describe the United States, so the readers can visualize this nation. The third rhetorical device was how Washington used allusions to build on the patriotism he shared with the American people. He referred to the events and important documents that gave the nation pride such as: The Constitution, the Bill of Rights, and the American Revolution. These documents are seen as triumphs in American history and with his allusions to these important documents; Washington helped recreate a feeling of unity.

Washington used timing, rhetorical devices, logos, pathos, and ethos throughout his speech to give the nation a warning. The warning spoke about not splitting into political parties, not be separated by geographical rivalries, and not tin becomes involved in foreign policy. The speech automatically brings ethos into the conversation because it is written by a beloved leader who presents himself as an educated friend and he is able to point out faults in his presidency. While regarding logos, Washington is able to bring up the multiple reasons why the nation should stick together as a whole and he provided examples of European disputes that the United States should stay away from. As a president, he has a firsthand account of the instability of Europe and explains why the United States is better off on its own.

Finally, Washington instills pathos in his speech to encourage the nation to always unify and isolate themselves from other countries. “Washington’s Farewell Address” conveys the message of avoiding foreign entanglements, the establishment of political parties, and allowing geographical differences and rivalries to stand in the way of unifying. His advice was followed initially; however, it fell apart eventually. The nation ended up splitting into political parties, which today has interfered with easily accomplishing tasks for the American people. The nation ended up allowing geographical differences to come between them unifying, which resulted in the Civil War. Finally, the nation abandoned Washington’s idea of isolationism, which leads to wars such as War World I, War World II, and the continued presence in the Middle East. I believe that “Washington’s Farewell Address” is relevant today and he predicted the problems our nation has continued to face. 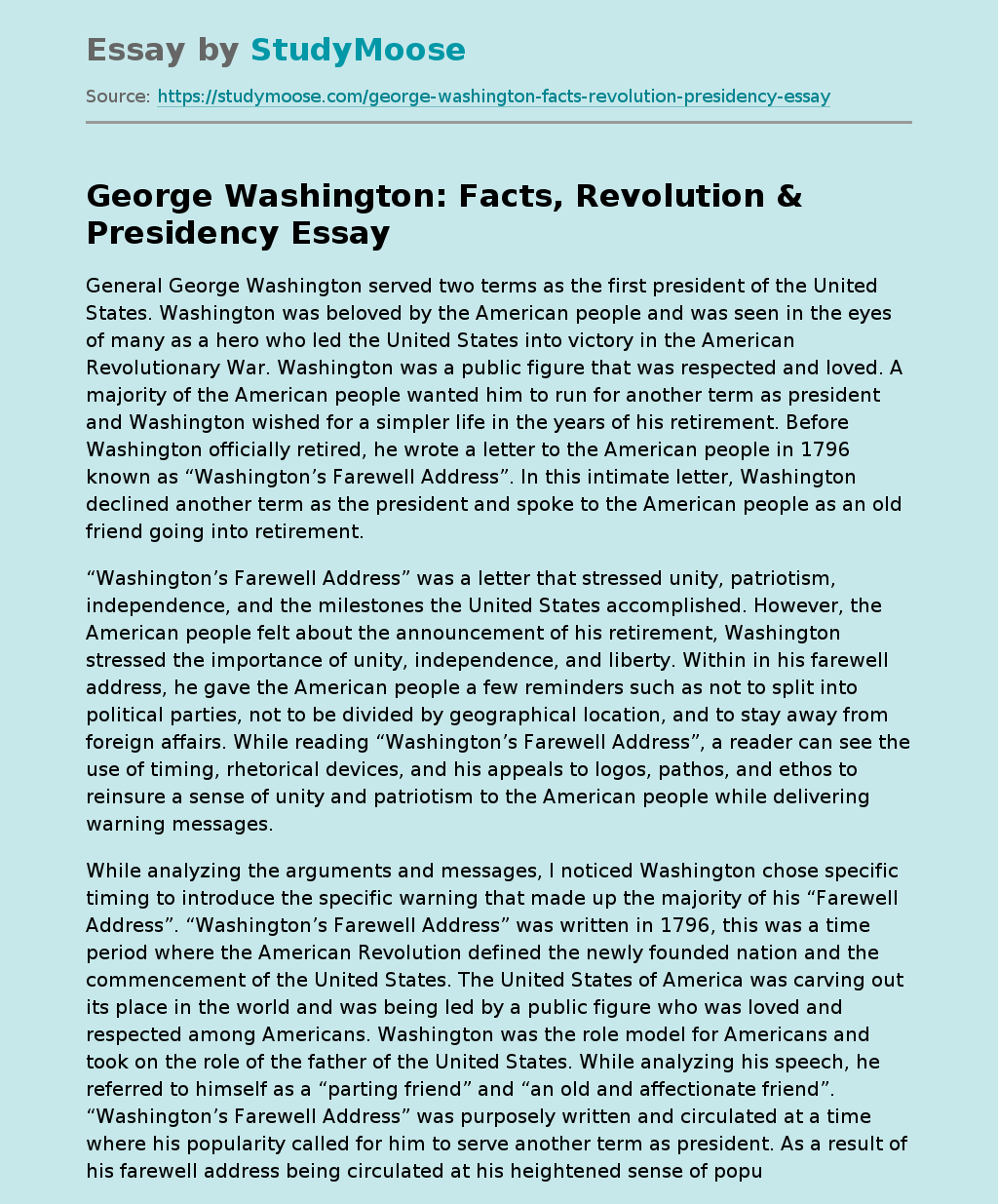