Why did Germany lose the First World War in 1918?

The First World War was a huge event which ended abruptly; going from huge German advances after March 1918 to Germany asking for peace later that year: they were forced from a hard hitting offensive to defeat for various reasons:

One of the key reasons for Germany’s defeat is the internal problems suffered by Germany from late 1917. Morale in the ranks of the Germany army was diminished to a painfully low point: they were exhausted from the spring offensive and on low morale from the turn of the tide at 1918 and the new of the entry of America into the war on the Allied side.

Don't use plagiarized sources. Get your custom essay on
“ Why did Germany lose the First World War in 1918? ”
Get custom paper
NEW! smart matching with writer

Germany was suffering overall supply problems: There were food shortages for over a year, coal became in short supply and consumer goods were very hard to get hold off. Industrial output had fallen by up to 57% by the end of the war; the German people as well as the Germany army were running out of supplies and the army of munitions.

The outbreak of Spanish influenza, in particular, made matters far worse. Exhausted, ill, low morale and under-supplied troops do not fight well; especially in the face of a well stocked enemy.

The German’s had discovered no effective anti-tank weapon to help answer the combined integration of technologies employed by the Allies, and the low morale and under-strength Germany army was not able to answer to the Allies combined assault. At many points, there were mass surrenders in the army, and fresh divisions were greeted with chants of “war pro-longers” showing the German army to have lost heart.

In the cities, too, morale was low: shortage of home supplies and Spanish Influenza had caused the German people to lose heart: they began to demand ‘peace at any price’. Internal problems suffered by the German populace and its army severely crippled Germany’s war effort: without this factor Germany would have certainly fought longer and harder.

Another reason is the exhaustion and losses suffered by Germany due to the failure of Germany’s Ludendorff offensive. During the offensive Germany lost nearly a million men: losses they could not afford, especially as the entry of the American’s into Europe was imminent, bringing significant Allied manpower. The early advances of the German’s were too much: they had advanced too far; faster than their Artillery and supplies could go: meaning that large German forces were in enemy territory on a wide front left very vulnerable; with limited supplies and little artillery cover. The large advances made only left the troops vulnerable with few supplies and artillery, on top of heavy casualties.

The German army was therefore exhausted: all of Germany’s resources had been poured into this offensive, and Germany was left with an exhausted and low morale army; having suffered high casualties. In contrast, the Allies had fresh American troops, plentiful supplies and various integrated technologies; fighting exhausted, vulnerable and depressed German infantry. This allowed an allied counter-attack to force the Germans to make peace shortly after the offensive, ending the war in a pro-Allied way in 1918. Without the Spring offensive, Germany would have been in a far stronger position to defend itself. If the offensive was conducted better, it is possible however that it could have won the war for Germany.

Another reason is the entry of America into the war. Whilst the Americans did little fighting and late in the war compared to the British and French; they had a huge impact on the way that Germany conducted their war effort. The decision of America to enter the war meant that soon the large American army would come, giving the Allies an overwhelming advantage. Germany’s solution was to pour all their resources into ending the war quickly in their favour, the spring offensive, the failure of which was a key short term factor for Germany’s loss as explained above. The entry of America into the war also had a wider effect: by July 1918 a significant number of Americans had landed, giving an allied manpower superiority allowing the allies to replace their losses with keen and fresh troops: a luxury Germany didn’t have.

Most importantly, the entry of America had a large effect on the morale of both sides. Such a powerful country entering the war against Germany had a huge demoralising effect on Germany soldiers; many of whom felt they were fighting a losing war. It was a huge boost to Entente soldiers knowing that such a powerful and fresh country was coming to fight on their side. America had a large impact on the war; perhaps making an allied victory almost inevitable; bringing the war to a swift pro-Allied conclusion with the manpower, supplies and morale affects that it brought. Without America, the Allies would have been in a far weaker position to defeat Germany swiftly and Germany would not have been forced to pour all their resources into one final offensive.

Another important reason for the defeat of Germany is the effective integration of technologies which the Allies had employed by the end of the war. By the end of the war Allied (particularly British) command had improved technologies and had learnt to use them better than earlier in the war. Technologically, the Allies had a great advantage in 1918 onwards: Germany had some very high quality, but very few tanks and aircraft. By the war’s end, Germany had 45 tanks whilst the Allies had almost 3,500, and even Germany’s 45 tanks were mostly Allies tanks in disrepair or Germany’s notoriously unreliable A7V. The Allies also had an air advantage: by late 1918 Germany was not producing enough pilots or aircraft to match the enlarging Allied air forces; the Allies had gained a significant aerial superiority. Whilst Aerial engagement and attack only had limited significance in the First World War, these planes were available to aid the Allied war effort with reconnaissance.

The allies therefore had a general technological superiority. They were also combining their technologies in a very effective way giving a unity not seen earlier in the war. Aircraft and sound rangers were effectively coordinated with artillery, so that German targets could be better chosen and artillery bombardments delivered more effectively. Techniques such as creeping barrages were used more effectively offensively than before and bombardments were often shorter to keep an element of surprise. Tanks were now grouped in waves rather than singly making them much more effective, and were fully backed up by infantry attacking places weakened by artillery at targets spotted by aircraft and backed up by aircraft fire and supply drops. One very good example of the success of integrated technology was the Battle of Amiens: this assault by the Allies.

Various techniques including aircraft were use to spot enemy positions and artillery, so the artillery could bombard enemy gun positions and pin down defensive strong points, employing techniques like creeping barrages, allowing tanks and infantry to get forward. Tanks were then able, with infantry support, to run down barbed wire and combat machine-guns at close range. This allowed the infantry to over-run the enemy and take their positions. Tanks, aircraft, artillery and Infantry all working together, coordinated effectively and mutually supporting each other were a major cause in allowing the Allies to advance and to win the war quickly. The technological advantages, particularly in the tank area, enjoyed by the Allies gave them an advantage in their offensive that Germany was limited to; allowing their offensive to be far more effective than a repeat of Somme or Passchendaele where the various technologies were not properly coordinated.

Germany losing the war in 1918 is too complex to be explained with merely a single factor: it was caused by the interaction of the factors detailed above. The entry of America into the war prompted and encouraged Germany to try to end the war quickly; putting everything they had into the spring offensive, causing their army to be exhausted. Internal problems suffered by Germany and the failure of the spring offensive allowed the Allies to capitalise and push the German army back. The integration of technologies employed by the Allies allowed the Allies to take advantage of the exhaustion caused by the spring offensive and internal problems. America also helped the Allies capitalise on the exhaustion and internal problems of Germany; keeping fresh infantry and supplies provided to push Germany back to the Hindenburg line.

Germany’s internal problems pushed Germany’s administration and morale to breaking point; combining with the army exhaustion and hit to morale caused by the spring offensive to severely cripple the German war effort. Without the integration of technologies the Allies would have not been able to push the German army back so effectively; without America the Entente would have found it harder to advance none of America’s fresh troops and supplies; along with the morale changes it brought, without the Spring offensive Germany would have been able to defend itself far better even against the onslaught of integrated technology and Americans and without internal problems Germany would have been able to defend itself better. All the factors were key ones in forcing Germany to make peace. 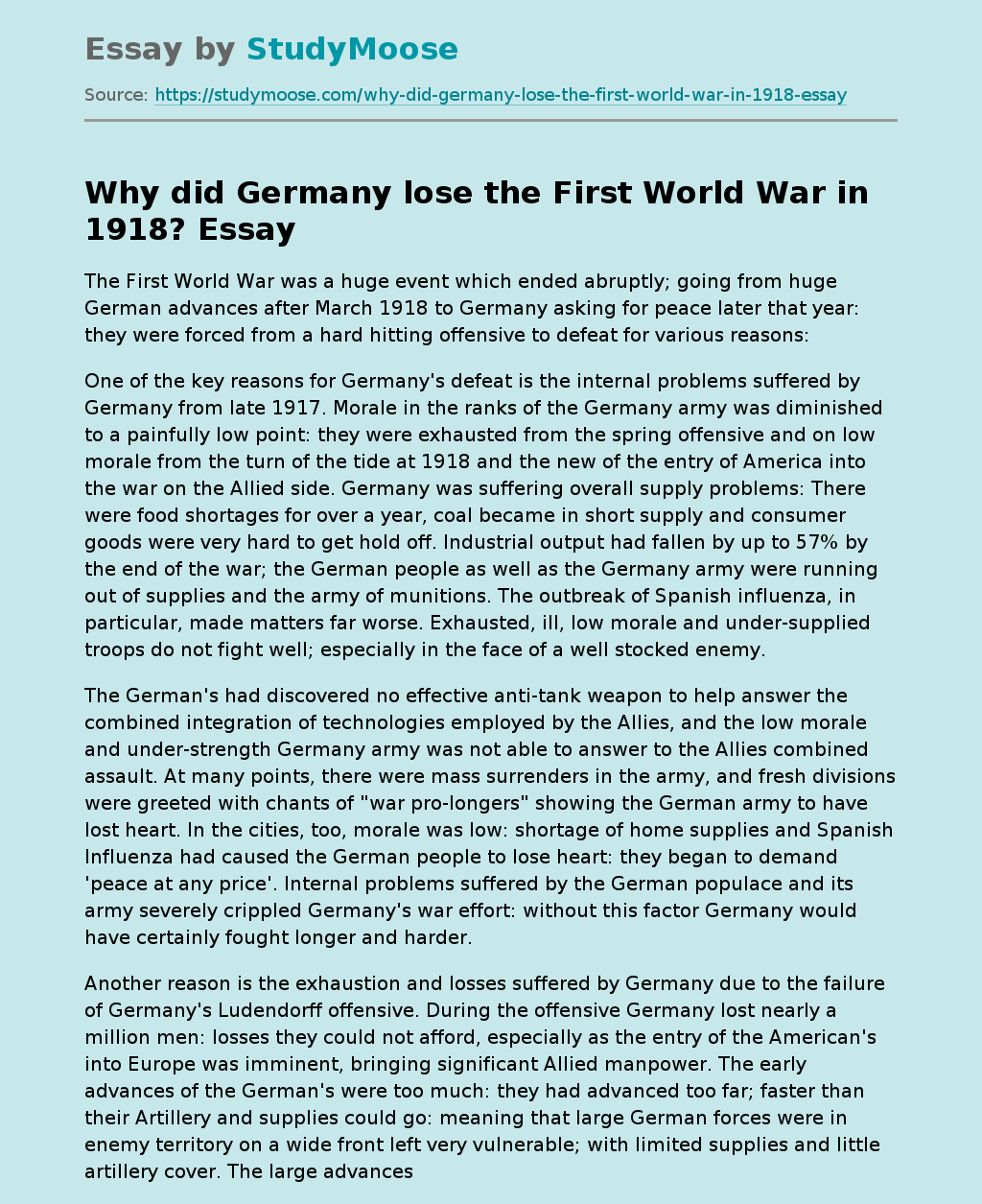