Which factors led to Germany's defeat in the World War I?

The World War I was the first global war which happened in Europe in 1914 to 1918. In this war, Germany and Austria-Hungary were defeated by Great Britain, France and the United States because of several reasons. The factors which led to the defeat of Germany were poor planning, British blockade and entrance of the United States army in the war.

Firstly, the deficient plans of the both countries, Germany and Austria-Hungry, led to their defeat. Both countries had their own plans which were the Schlieffen Plan and the Plan R respectively.

Don't use plagiarized sources. Get your custom essay on
“ Which factors led to Germany’s defeat in the World War I? ”
Get custom paper
NEW! smart matching with writer

The former was to defeat France in six weeks by invading at high speed at Belgium, so that the German armies could turn to fight the Russians. However, Germany’s invasion of France went wrong that Belgian army and British Expeditionary Force fought better- which slowed down the German troops- and the Russian army attacked Germany sooner than it expected. Hence, Germany fought over two countries at the same time which means it had to split its army.

Furthermore, the long journey to France form Germany made the soldiers exhausted. This shows that the plan was badly made that it failed to know the capabilities of its own country and the enemy as well. Besides, the Plan R of Austria-Hungary also failed that it was defeated by Russia. The Plan R was to send huge forces across the border into Russia. At first, the Austrian armies were able to capture great areas of Russia, but within a week they turned and retreated over 200 kilometers.

They even left heavy guns and ammunition behind them. Moreover, Austria was also being beaten in its attack on Serbia. (Why is this show Plan R was a bad one?????!!!!!!) The poor plans caused losses in the battlefield that both countries had a vast number of casualties.

Secondly, the British blockade which led to the lack of materials was a key factor in the defeat of Germany. As Great Britain had the largest army in the world, it was also effective in blockading the materials that were supplied to Germany. Starved of supplies, the German army was weakened and lost support from the German people. The British blockade not only affected the German army, but also had an effect to its civilians that about 300,000 Germans died related to malnutrition during 1914 to 1918. Furthermore, in 1915, one-third of all pigs was slaughter by the government because the naval blockade had cut off imports of fodders to feed them. In addition, Britain also cut supplies of nitrates which were vital for explosives for the army and fertilizers for the farmers. Automatically, this caused the shortage of weapons and decrease in the food production. As the problem of lacking in material got severer, Germany finally, decided to make an armistice later on.

In addition, America’s entry into the war caused the defeat of Germany and Austria-Hungary. Germany had no insight into the United States as a neutral power that it torpedoed the Lithuania and killed 128 of the American passengers. Germany’s unrestricted submarine warfare was to make starvation of supplies in Britain and France, but the German U-boats also sunk American ships which made anti-German feeling. Furthermore, Zimmerman Telegram, which suggested Mexico to alliance with Germany if America joined the war, boosted America to give financial help to the Allies and declare war on Germany. Therefore, when General Ludendorff of Germany chose a massive attack and broke the stalemate, American soldiers arriving at the rate of 50,000 a week, and the Allied armies counter-attacked the German army from three sides. The assault involving America was very effective that Germans retreated until they were back at the Hindenburg Line.

In conclusion, poor planning of German and Austrian army, effective blockading of Britain and entry of the United States led to the defeat of Germany and Austria-Hungary. Because of the defeat in the World War I, Germany had to sign up for the Treaty of Versailles and this led to hyperinflation and economic crisis.

Which factors led to Germany's defeat in the World War I?. (2016, Aug 03). Retrieved from https://studymoose.com/which-factors-led-to-germanys-defeat-in-the-world-war-i-essay 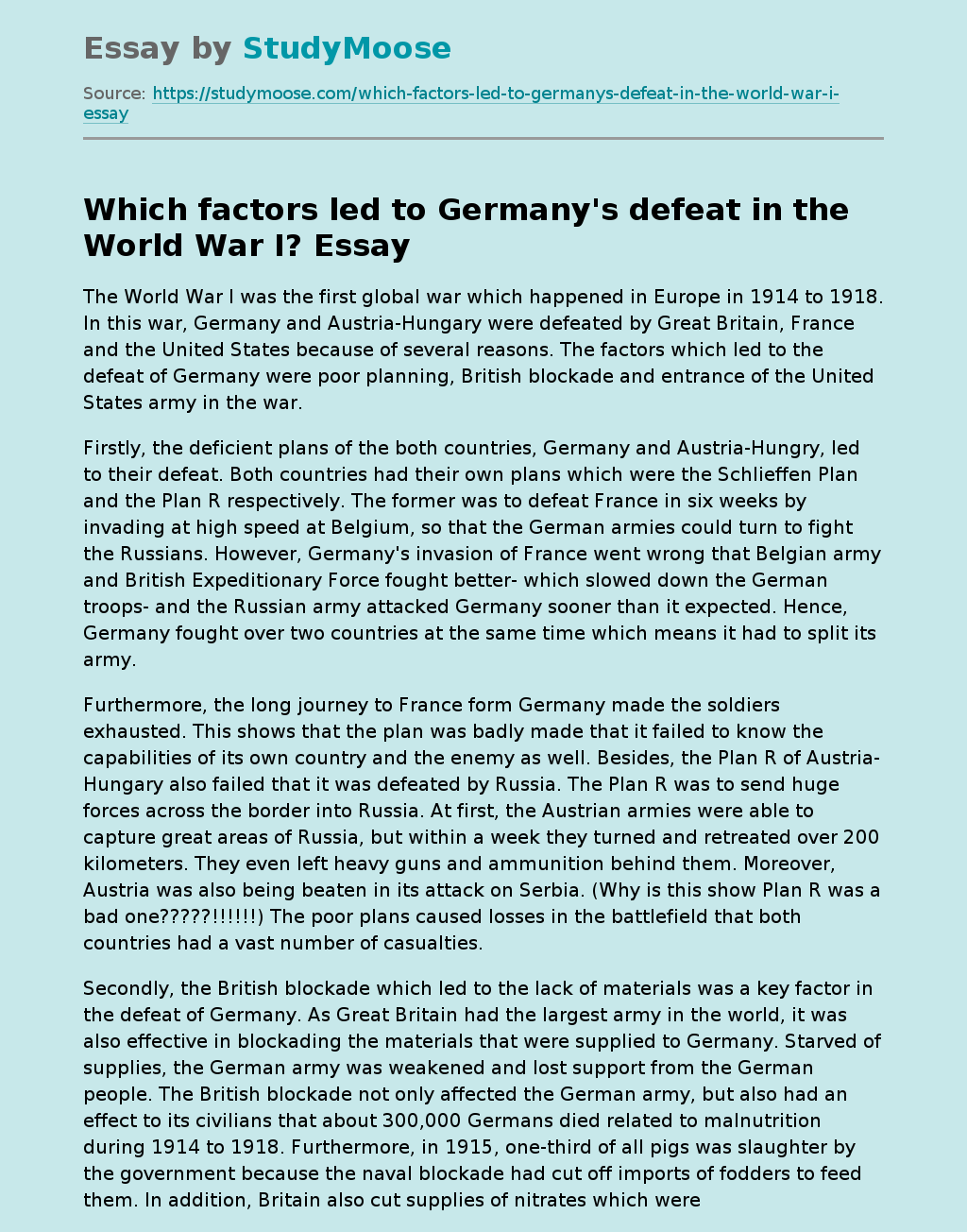