Germany became a unified country in 1871 under the leadership of Otto Von Bismarck. The separate states up until this time were independent, Prussia being the strongest and most influential, followed by Austria. There are several contributing factors to the unification of Germany, the most influential of which being the leadership of Otto Von Bismarck. The three wars that Prussia fought with Denmark, Austria and France also played significant roles in the unification of the German states.

Don't use plagiarized sources.
Get Your Custom Essay on Key Factors of German Unification Just from $13,9/Page

Another factor to consider is the increase in support of nationalism around Western Europe at the time, and the changes in German society. Through an evaluation of these factors and relevant sources one can understand how they linked together and led to the eventual unification of Germany. During the nineteenth century, Europe was experiencing major social, economic and political changes. The middle class had grown in both wealth and numbers, and were demanding a change in government. Contributing to this were the ideas of the Enlightenment, and the philosophies of Liberalism and Nationalism.

The Age of Enlightenment was a period of intellectual development throughout the eighteenth century, during which time people began to question the Church and lean more towards the explanations of science. These ideals were still very much present during the nineteenth century and influenced the Government as the people of Europe believed their countries should be governed based on human rights rather than religion. Nationalism was the belief that people of a common language and culture should be joined as one country, and Liberalism believed in a representative government.

Bismarck, Prussian President at the time, favoured Nationalism, however he vehemently opposed Liberalism. Bismarck’s political preferences are significant to German unification as they played important roles in how he came to power and the decisions he made during his term. Otto Von Bismarck was appointed President of Prussia in 1862 by Kaiser Wilhelm I. He was called in to Parliament because the Prussian Chamber of Deputies, consisting mostly of liberals, was opposing the King’s army reform bill and the King wished the break the deadlock.

As president, Bismarck led Germany into unification through his opportunism and his various policies. Charismatic yet aggressive by nature, Bismarck was known for his ability to seize opportunities and manipulate situations to his advantage. It is debatable whether or not Germany would have achieved unification under the power of anyone other Bismarck. In his 1996 book The Problem of the German Nation State, Wolfgang Mommsen said, “Bismarck’s policies- admirable or satanic… occupy centre stage. ” This is particularly true for his infamous policy of “blood and iron”.

Also, Bismarck’s diplomatic abilities are able to be seen when looking at his foreign policy of 1871 to 1890. Bismarck’s policies and opportunism are predominantly evident when looking at the Three Wars. During the period of 1864 to 1871, Bismarck led Prussia into three significant wars. As said by G. A Craig in The Germans, 1991, the unified Germany was “created in 1871 by Bismarck’s diplomacy and Prussian military power. ” The first of these wars was the war with Denmark over the provinces of Schleswig-Holstein in 1864. Prussia and Austria combined their military forces and won against the much weaker Denmark with considerable ease.

This was a contributing factor in the second of the three wars, which was fought against Austria, as the two states fought over the control of the Provinces. The purpose of this war with Austria, which later was known as the ‘Seven Week War’, was to exclude Austria from the new Germany. Bismarck knew that Austria was Prussia’s main competition for leadership of Germany and therefore wanted the threat removed. The Prussian army annihilated the Austrians in the Battle of Sadowa, forcing them to surrender. Both states then signed a peace treaty known as the ‘Treaty of Prague’, as Bismarck did not want to create an enemy of Austria.

This war drew together most of Northern Germany, however it did not include southern German states such as Baden or Bavaria. The Franco-Prussian War of 1870-1871 was what finally united Germany as one nation, and was therefore seen as the most important of the three wars. War was declared over a disagreement with the French about the Spanish throne, the public statement of which was edited by Bismarck to sound hostile in order to create conflict. The Prussian army achieved victory quite easily, proving to be far better train and better equipped than France’s army. After six months of warfare the Treaty of Frankfurt was signed.

These three wars played a significant role in unifying Germany as they gave the people a common goal to band together for. They also established to the rest of Europe the strength that Germany possessed as a unified country. Before 1871, Germany was a weak and divided country. Due to many social and political factors, the most significant of which being the leadership of Otto Von Bismarck, Germany became one unified country, much stronger and wealthier than before. However, there were negative consequences that came of German unification, which were seen in the First World War which lied ahead. 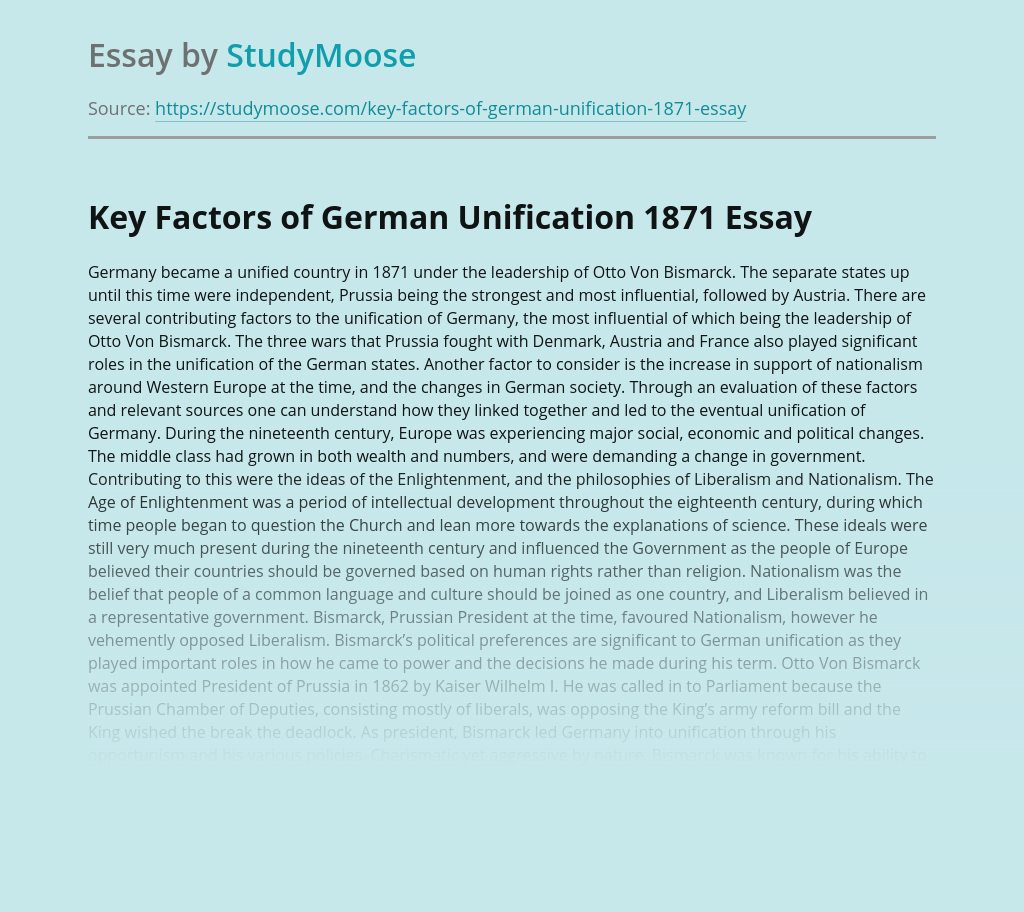 Who is responsible for the Holocaust?

Rate this post Holocaust is a “Greek word meaning, ‘destruction of an entirety; a whole'” (Berry Notes). The Holocaust usually refers to a time in Germany when Adolf Hitler was Chancellor, and he and his many followers killed around six million Jewish people, as well as around six million others. We can see the beginnings...

Rate this post “Nationalism united people into nation- states, toppled empires composed of many ethnic minorities, and contributed to the outbreak of wars in the nineteenth century. How would you evaluate this statement?” Nationalism is a common patriotic passion for one’s nation and fellow nationals that united, and still unites certain groups of people. Nationalism...

Rate this post Looking into t1he past is not an easy task, especially when looking back two thousand years. Without writing, it is impossible to speculate the kind of culture our ancestors lived. About 54 A.D. a roman citizen named Tacitus wrote his account about the early German nation. His writing had survived the sands...

Rate this post IN SUNNY SPAIN(1882-1885) * Rizal’s Secret Mission To observe keenly the life, culture,, languages and customs and laws of the European nations in order to prepare himself in the mighty task of liberating his people. – Djemnah with 50 passengers on board * Secret Departure for Spain Paciano, uncle Antonio Rivera, his...