Cinderella Man and the Great Depression

James J. Braddock once said, ” I have to believe that once things are bad, I have to change them”. The movie Cinderella Man is about Braddock rising from a poor, unsuccessful boxer to the heavyweight boxing champion of the world. The historical background to his life and career was during the same time period as the Great Depression. James Braddock was not always the boxer he is now known to be, in the 1920’s he had lost one third of his fights and people referred to him as a “bum” which is the lowest name you could label a boxer at the time.

+84 relevant experts are online
Hire writer
Don't use plagiarized sources. Get your custom essay on
“ Cinderella Man and the Great Depression ”
Get custom paper
NEW! smart matching with writer

Despite a broken hand and the hatred the crowd brought upon him, Braddock never hesitated to do his best on the rink. However, when the Great Depression began, Braddock lost his money, job, and for an amount of time, electricity. Braddock’s character represented the ups and downs that were occurring in the United States at the time. Following his struggles the viewer can get a glimpse of how most Americans lived at the time of the Great Depression, see their everyday battle for food, jobs, shelter, and see how ordinary people coped with the economic downturn.

At the beginning of the movie Braddock was living in a stylish house, had stocks and he was earning good money as a boxer. On October 29, 1929, when the Stock market crashed Braddock’s and his family’s life drastically changed. He not only lost all his investments but because of his physical injuries Braddock could not fight in the ring any longer.

Braddock spent little time dwelling on the fact that he had just lost his job and instead covered the cast that secured his broken hand and made his way to the docks the next morning in hopes of being one of the few lucky men to be chosen. Money was tight, but when his son came home with a stolen salami Braddock didn’t think twice to return the salami that could be very useful for the family to its oblivious owner. Not only his morals remained intact during the very difficult times, but also his family life was surprisingly just as good if not better than during the good times.

No matter what happened he saved his loving, respectful relationship with his wife and his children. His children and his wife were always waiting for him at the door after each fight with compassion and they laughed and cried together. His family ties were very strong, they stood behind him every step on his way to success and probably he can thank his family for what he had accomplished. When the chance to return to the boxing rink knocked on his front door, James Braddock accepted without hesitation. His luck began to turn around as more money made its way into Jim’s pocket. A couple of fights later James J. Braddock went from a poor local fighter to the world’s. best heavy weight champion and earned his nickname, Cinderella Man. Some may have seen Mae Braddock as just another unfortunate wife, for she, like many others, had a husband with a low income that struggled to support the family, Mae disagreed.

Mae Braddock loved her husband very much, rich or poor she wanted no one other than James J. Braddock. They had three children, James, Howard and Rosemarie. When sickness threatened one of their children’s life, Mae decided to send their kids away to a home where she thought they would be safer. A disappointed and defeated Jim disagreed with Mae’s decision and decided to consult his former boxing buddies for help to pay the bills in order to make their home a safer environment for the kids. Although Mae knew people frowned upon asking others for money, she stood by Jim careless to what others would say. Mae Braddock took up sewing to help James support the family they both knew and loved. Although Mae didn’t completely approve of the life­threatening boxing matches Jim fought to sustain the Braddock family, she never abstained him from the sport. A caring mother and loving wife, that is who Mae Braddock should be known as.

Joe Gould is a lively manager and friend to Braddock who not only does his best to find him matches puts his all into the matches staying right along with Braddock during his fights. Gould though always stays as a friend to Braddock throughout even as they are both facing the troubles of the Great Depression. Gould was a hot­tempered, Jewish talker who loved promotion. He was absolutely loyal to Braddock. When his career hit rock bottom, Braddock told Gould to go find some other, more profitable fighter to manage. However, Gould refused to turn his back on his client. Even when evidence was scant, Gould always believed in Braddock’s potential. It was Gould’s unflagging persistence that secured Braddock his match with Corn Griffin and then his subsequent opponents. Though times were tough, Joe Gould always had James Braddock’s back.

Cinderella Man and the Great Depression. (2017, Feb 10). Retrieved from https://studymoose.com/cinderella-man-and-the-great-depression-essay 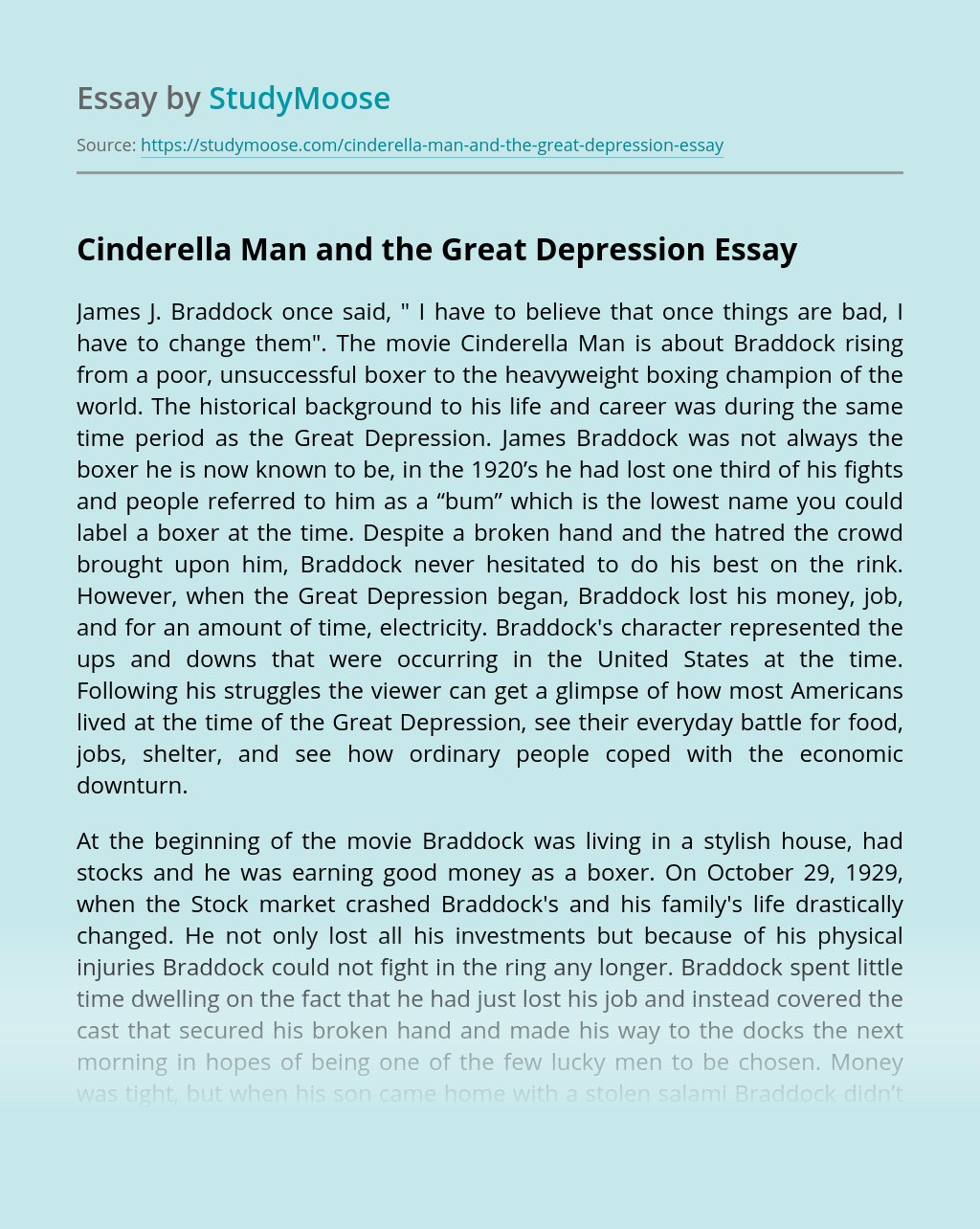