Do you recognize these brands of products: Adidas, Nike, Fila? Of Course you do! These are just a few of the many products we prefer rather than our own products made here like: MDSE, Otto. 7 out of 10 people choose these imported products rather than our local products. How come the sales of imported products are higher than our products? Is this a psychological disorder? How and when did we have this? Can this kind of mentality be reduced? The main reason why Filipinos have this kind of mentality is because of the countries who shared their culture and beliefs in our country.

Turn in your highest-quality paper
Get a qualified writer to help you with
“ Colonial Mentality: Its Roots ”
Get high-quality paper
NEW! AI matching with writers

Cultures and practices shared by America:

Cultures and practices shared by Spain:

How colonial mentality is inherited by Filipino individuals

According to the theories of Memmi (1965), Fanon (1965), and Frerie (1970), it is the internalization of the inferior perception that is imposed on him/her by the colonizer. Such internalization may lead to feelings of inferiority about oneself and one’s ethnic of cultural group, and feelings of embarrassment about being a person of his/her culture. The following narrative provides an example of how a Filipina American describes her negative self-concept:

“Throughout my days at elementary school I had an acute fear that someone would discover that I was Filipino. It was open season on Filipinos. There were the “buk-buk” (sic) jokes, other derisive nicknames created by students, and a large number of stereotypes expounded and attributed to Filipinos. They were labeled as being stupid, backwards, and capable of only the most menial jobs available…In my own experiences, I knew that these generalizations were false, but still I feared association with them. These images and stereotypes persisted in the consciousness of the student body for so long that I began to look at being Filipino as a curse. It embarrassed me that I should be a part of a race so disregarded and dehumanized by society” The denigration of the Filipino culture and body involves the perception that anything Filipino is inferior to anything foreign. These judgments apply to, but are not limited to culture and lifestyles, physical characteristics, socioeconomic opportunities, language, material products and leadership.

Such a global negative regard of Filipino culture is thought to extend from preferences from foreign-made products to judgment of their physical features as more attractive and reliable. “(Among Filipinos,)…white skin is considered better. I cannot tell you how many products are advertised and sold (in the Philippines) to “whiten” our skin. Marrying a white man… is a step up… socially and economically. Mixed children by white men… are thought of as more valuable, precious, and better prepared for…society. This mentality isn’t new. Many of the elders… believe “White is right.” All white boyfriends, husbands, and mixed children are shown off as trophies” (expressed by a young Filipina American, as quoted by Bergano & Bergano-Kinney, 1997, p. 202).

The discriminating attitudes of some Filipinos hold against members of Filipino communities they perceive to display Filipino characteristics. Allport asserted that discrimination against less Americanized Filipinos is the discriminatory attitudes toward one’s co-ethnics may in large part be due to the minority individual’s strong desire to conform the values, attitudes, and beliefs of the dominant group, which may include the dominant group’s discriminatory attitudes and practices. Some Filipino Americans may ridicule less-Americanized Filipino Americans by tagging them with labels such as “FOB” (fresh-off-the-boat), “stupid”, and “backwards” (Revilla, 1997).

Such a discriminatory attitude may reflect the belief that the only ways for Filipino Americans improve themselves is to Americanize (Rodriguez, 1997) and to associate only with American or Americanized people. Another example of discrimination against less acculturated Filipino Americans is the perception that English proficiency reflects higher status and intelligence. Those who speak English with a Filipino accent are reported to be given the subjugating labels mentioned and be discriminated against by highly Americanized Filipinos “because the former’s language is often associated with inferiority, lack of intelligence, and ‘otherness.’ This arrogant perception is based on the assumption that ‘standard’ English is a universal norm and…marker of intelligence” (Strobel, 1997, p.74). A 26-year old Filipina American stated:

“My idea…of Filipino culture and identity is split into two forms: the FOB…and the Filipino American. I didn’t associate with “FOBs.” They were backward, had accents, and just acted weird…Then there was me, the non-“FOB,” who spoke perfect English, born and raised here, had only white friends…I was “white” in every way except for the color of my skin, my nose, and eyes…I hate to admit but I have been an accomplice to the cruel acts that have been perpetrated against Filipinos” (as quoted by Strobel, 1997, p.67). 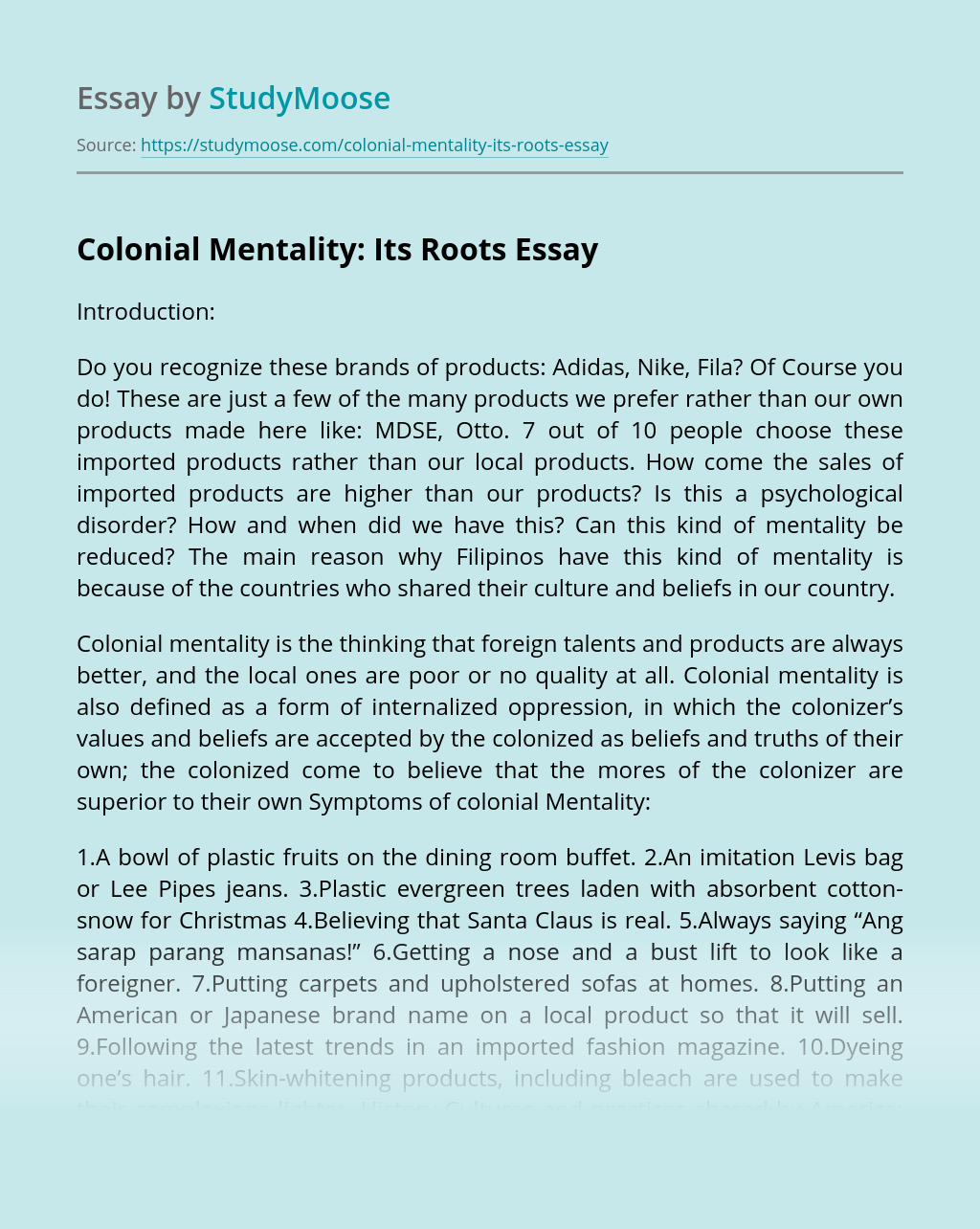 Turn in your highest-quality paper
Get a qualified writer to help you with
“ Colonial Mentality: Its Roots ”
Get high-quality paper
Helping students since 2015
Stay Safe, Stay Original