Individuals have been aspiring for a progress in their country. With this kind of mindset, a nation will be able to embrace prosperity. On the other hand, the Philippines still remains to be poor even though we, Filipinos, have been longing for its progression. We have this disease called crab mentality that is one of the reasons that hinders the growth of our nation and is a great obstacle to the entire citizenry of our country. “If I can’t have it, neither can you.

Don't use plagiarized sources. Get your custom essay on
“ Filipino crab mentality ”
Get custom paper
NEW! smart matching with writer

” – A very popular phrase that runs along the way of thinking of many Filipinos.

This short-sighted, selfish, non-constructive thinking is called crab mentality. Crab mentality that exists among many Filipinos was first coined by Ninotchka Rosca, is metaphorically illustrated by the behavior of crabs in a bucket. All of them are struggling for survival so they desperately need to get out of the bucket. One crab tries to climb its way out of the bucket but the other crabs beneath him will not let him escape and drags him down, thinking “If I can’t escape here, then you cannot too.

” In the end, all of them will not be able to get out of the bucket.

Crab mentality, as narrated by Kane Lawless, is a term used colloquially referring to a person trying to leave an unprivileged-life but is kept from doing so by other people who hold them back for they resent that person’s success. It is an act of keeping others from getting what they want and not wanting others to be successful.

This prevalent Crab mentality is also reflected on the famous saying “we all like our friends to get ahead, but not too far ahead. ” The tendency is they knock those people ahead of them down.

A person pulls you down just to get them to the top or if it seems that that person can’t get out of his or her bad life, he or she pulls you down so that both of you will share the same misery. Filipino crab mentality entered the picture when the Spaniards colonized our country. Natural-born Filipino natives (indios) worked as servants to the peninsulares (Spaniards born in Spain but residing in the islands) and insulares (Spaniards who were already born in the Islands). In order to survive, indios totally embraced the crab mentality. They destroyed the reputation of a favorite.

Once the damage had been done, the indios then presented themselves as better to others for them to become the new favorite of the peninsulares and insulares. Crab mentality was still practiced even after the Spanish colonization where we were next colonized by the Japanese and Americans. Decades passed but until now, traces of crab mentality have remained with modern-day Filipino (Americanenglish. ph). Unfortunately, such mentality is widely shown everywhere. It is found in business, charitable organizations, social networks, politics, education, and religion.

It’s also found across race, gender, and even at home. Crab mentality is like a zero sum game where a gain by one player must be matched by a loss of another player. There is no mutually beneficial exchange. There are only losers and winners in this world view, and everyone is into making someone else a loser. It is common in places which have competitive environment like in an organization or at an office. A struggling worker possesses crab mentality for he negates the successful deeds of his coworkers.

Workers snag at each other to pull them down rather than congratulating someone who earns a promotion. People who attempts to get out of misery often find themselves foiled by friends and relatives who keep them sucking back in. When someone decided to pursue a college at a prestigious university, some of his friends, neighbors or even family members would discourage him to so that he won’t be able to get out of his bad life situation or that he could not get ahead of them. In the world of politics, there is a character assassination. Politicians possess crustacean sensibilities.

According to James, “the crab mentality in the losers of the election will not let the winners succeed. The crab mentality in them will try to pull those in power down. ” For example, if Manny Villar wins, Jamby Madrigal camp will not simply shut up and pray Villar becomes a successful president. If Noynoy Aquino wins, the pro-Manny Villar group will probably not work together with Noynoy in helping him to attain progress for the country. They will not praise for their opponents vision of the Philippines nor they will help each other but they will find a new dirt to throw at someone else face instead.

This mentality strikes at all levels. Neighbors are defaming neighbors through bad rumors and gossips. Jeepney drivers flat the tires of their fellow drivers’ jeepney for them not to obtain higher income for the day. Students are destroying their classmates’ work or project so they won’t get higher grades than them. Why is there crab mentality? Crab mentality is manifested by the acts of hate, greed, envy, and jealousy.

Men behave like crabs when these acts control their heart. They try to outdo each other because of insecurities and selfishness. The crab mentality exists because of the man’s unseen emotional demands and burning envy of the achievements and possessions of others. When one envies somebody, one of his natural reactions is to knock him down and that best describes crab mentality. Crab mentality is something that can be found in all segments of the society. It is reaching the top at the expense of others. Individuals hinder the path of the one aspiring for progress. They knock others down to acquire their position or to prevent them succeed.

Like the crab, some people believe that lifting their selves up is to bring others down. Crab people may try to bring you down with every way they can, with anger, verbal attacks, spreading false information, talking behind your back, destroying your works and efforts, and discouraging you to greener pastures. They’ll ruin your reputation for you to lose your self-confidence and to stop reaching your dreams. We, Filipinos, fall as victim to the malady of crab mentality that wrecks the reputation of our country and that interferes to our nation’s progress.

The Philippines just can’t seem to move forward with this mentality and we still wonder why our country remains poor. So who suffers in the end? Who are trapped all together and can’t ever escape in a bucket? All of us. 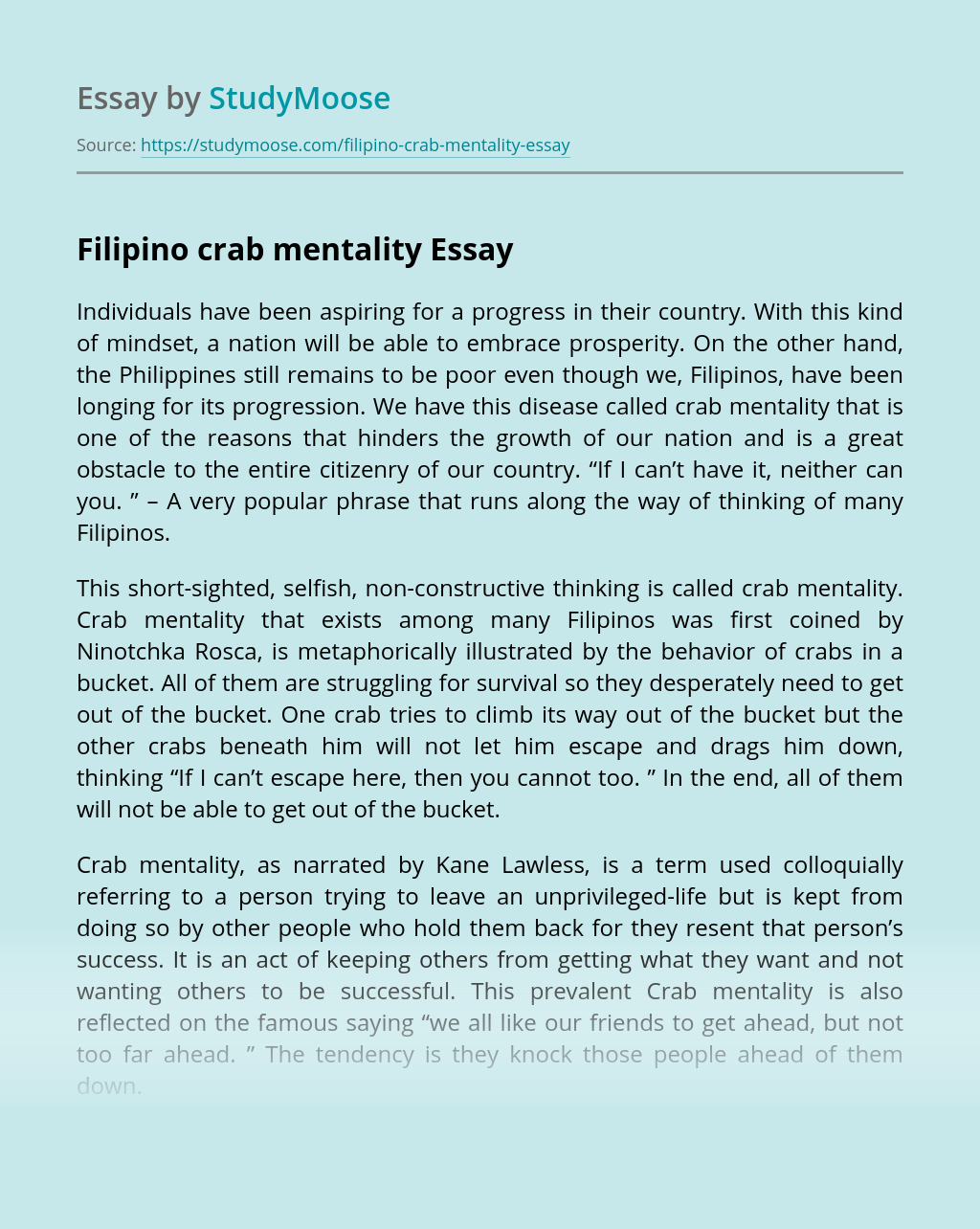