Jon YoungDr. WinderAnimal BehaviorFebruary 6, 2019The Hermit Crab The Hermit crab is one of the most overlooked animals in the animal kingdom. Most of us have seen them walking around in fish tanks at the local pet store with colorfully painted shells at a discount price. These shells not only give a nice visual appeal, but they serve a very important purpose. The hermit crabs use of the acquired shells is a special behavioral adaptation that has allowed the species in its intertidal habitat.

Don't use plagiarized sources. Get your custom essay on
“ Jon YoungDr WinderAnimal BehaviorFebruary 6 2019The Hermit Crab The Hermit crab is one ”
Get custom paper
NEW! smart matching with writer

The Hermit crab is a decapod crustacean in the class Crustacea and infra-order Anomura which includes five different families: Paguridae, Diogenidae, Coenobitidae, Parapaguridae, and Pylochelidae. These five Hermit crab families are distinct from other Anomura species in that the fifth pair of appendages are smaller in size (Patsy A. McLaughlin). There are more than eight hundred total species of hermit crabs and have been found to be living in shells for more than one hundred fifty million years.

The exoskeleton covers the head, appendages, upper abdomen, and thorax. The lower abdomen is made of soft muscle connecting to the muscular tail that allows it to wrap itself inside the shell keeping this region and its most susceptible bodily portion safe from harmful predation or environmental conditions (Patsy, Mclaughlin A.). The exoskeleton not only provides protection from predation but also aids in water retention to prevent water loss. Hermit crabs are native to the coastal waters of tropical continental regions throughout the world (Hazlett, Brian A.). Hermit crabs are omnivores which includes a diet consisting of plankton, invertebrates, and small fish. The colorations of the hermit crab vary depending on species but normally are greenish-grey to red with the lower abdomen and tail section are a typically darker pink. The hermit crab ranges in size from a few millimeters to six inches at full growth, usually weighing up to eighteen ounces, and have a lifespan up to ten years (Patsy, Mclaughlin A.). Hermit crabs will forage for shells along the ocean floor in search of a home and protection. However, the shells they acquire are only temporary, as the hermit crab continues to grow it will eventually become too large for the shell it inhabited and must locate to another living arrangement (Vance, Richard R.). Hermit crabs are also very particular in the shells that they inhabit, they must have shells that are unique to their body structure and are durable enough to withstand constant effects of the ocean’s high and low tide as well as damaging effects they encounter from predation (Angel, Jennifer E). The shells inhabited by the hermit crab are a restricted resource depending on the population density and number of quality shells within their environment. Traditionally hermit crabs locate their new homes by foraging for larger shells throughout the ocean, if the shell is occupied, they will line themselves up in order of size and wait several hours for the hermit crab inhabiting it to trade for another shell, the hermit crab will then move into the newly vacant shell. This chain continues for each hermit crab giving each a shell over time when resources are abundant. This complex system known as vacancy chains displayed by the hermit crabs shows the evolution of the species over time and the evolved cooperation for the betterment of the species. During circumstances when resources are limited the hermit crabs will resort to competition among themselves in search for adequate shells (Zimmerman, Erin). The significance of the hermit crabs shell foraging can be broken down analyzing the costs and benefits of the behavior. The costs for the hermit crab would be accessibility to predation and other elements in its environment. Particularly during the relocation from one shell to another. As the hermit crab continues to grow it will be become more visible to predation without its shell and depending on the shell it acquires, the hermit crab can standout if the shell colors contrast to its surrounding environment. Another cost to the hermit crabs shell foraging is the energy output during locomotion for a vacant shell as well as its exposure to harmful parasites and bacteria that could inhabit the shell initially. The most obvious benefit for the hermit crab is protection from predation when a shell is acquired as well as being more camouflage with its environment when the shell’s colors are familiar with its surroundings. Another benefit for the hermit crab is home where it can feel somewhat safe when foraging for food and hiding from predation. The costs and benefits for the hermit crab’s behavioral adaptation for shell foraging, the benefits outweigh the costs giving the hermit crab a better overall fitness and an explanation for why this behavior has continued throughout the hermit crab’s evolution Works CitedAngel, Jennifer E. “Effects of shell fit on the biology of the hermit crab Pagurus longicarpus (Say).” Journal of Experimental Marine Biology and Ecology 243.2 (2000): 169-184.Briffa, Mark, Mowles Sophie L. Hermit crabs Current Biology Volume 18, Issue 4, 26 Feburary 2008.Hazlett, Brian A. “The behavioral ecology of hermit crabs.” Annual Review of Ecology and Systematics 12.1 (1981): 1-22.Patsy A. McLaughlin, Rafael Lemaitre, Ulf Sorhannus; Hermit Crab Phylogeny: A Reappraisal and Its Fall-Out, Journal of Crustacean Biology, Volume 27, Issue 1, 1 January 2007, Pages 97″115,Vance, Richard R. “Competition and mechanism of coexistence in three sympatric of intertidal hermit crabs.” Ecology 53.6 (1972): 1062-1074.Zimmerman, Erin. Tag: Hermit Crab. Questionable Evolution, Questionable Evolution, 17 Aug. 2013, questionableevolution.com/tag/hermit-crab/What Is the Natural Habitat of Hermit Crabs in the Wild? Reference, IAC Publishing, www.reference.com/pets-animals/natural-habitat-hermit-crabs-wild-96abe0751a1af2ff.

Jon YoungDr WinderAnimal BehaviorFebruary 6 2019The Hermit Crab The Hermit crab is one. (2019, Aug 20). Retrieved from https://studymoose.com/jon-youngdr-winderanimal-behaviorfebruary-6-2019the-hermit-crab-the-hermit-crab-is-one-essay 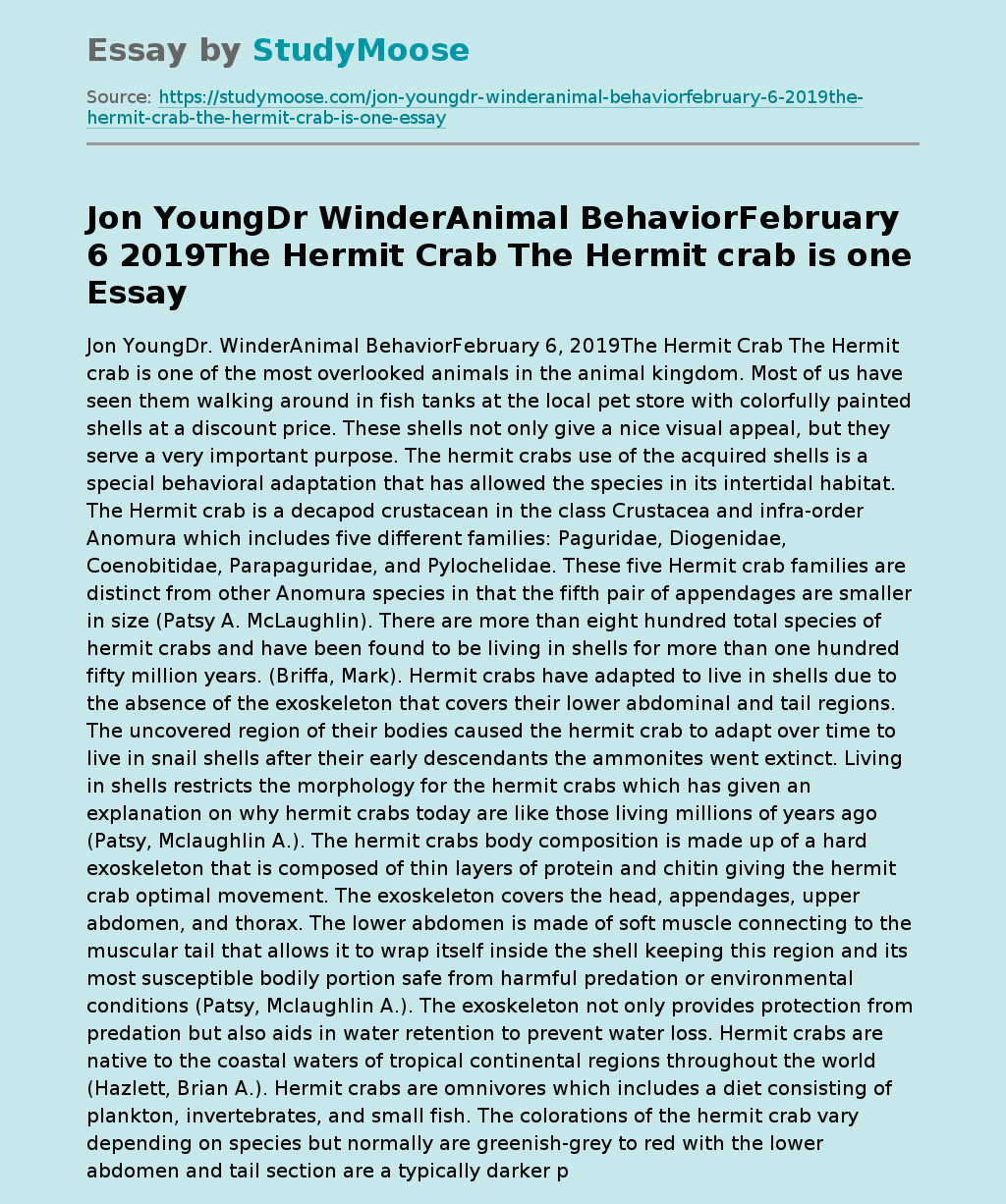